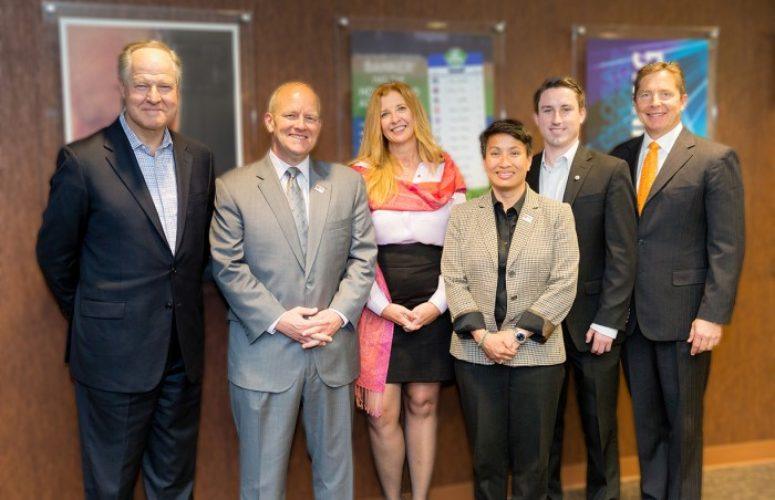 Realogy Holdings Corp., a global leader in real estate franchising and provider of real estate brokerage, relocation and settlement services, announced the company’s goal to increase its representation of employees who self-identify as US military veterans over the next several years. The announcement was made yesterday by Richard A. Smith, Realogy’s chairman, chief executive officer and president, just before inviting guest speaker Colonel David W. Sutherland, US Army (ret.), to the podium for an inspirational and riveting presentation on behalf of the Easter Seals Dixon Center for Military and Veterans Services, during which he advocated for our military service members, veterans, their families and the families of our fallen.

“We are a company that proudly supports our military veterans and are taking action by proclaiming our goal to increase the number of US military veterans among our employee population from 2 percent to approximately 6 percent of our workforce,” said Smith.  “The hiring of veterans is not only the right thing to do, it is good for business ─ and we will be a much better company as a result.”

Colonel Sutherland’s presentation, “The Inspiration and Courage; the Perspective of Reality,” was delivered at Realogy’s headquarters in Madison and followed by a hands-on training session for Realogy’s hiring managers and human resources professionals on how to create an inclusive work environment that values the individuality a veteran brings, and how to create a personal sense of belongingness and fit for each vet as they become part of a new team.

“The No. 1 remedy to heal the effects of combat is returning home to a place where you feel like you fit in, and that can be accomplished through meaningful employment,” said Colonel Sutherland. “A veteran brings proven leadership qualities, teambuilding expertise, a strong sense of duty, and global perspectives on diversity. We are working toward driving a new conversation about the potential of our veterans, engage organizations and communities, and connect veterans and military families with what they need for employment.”

Rick Davidson, the president and chief executive officer of Century 21 Real Estate LLC, a Realogy subsidiary, who hosted the event also serves currently as Chairman of the Easter Seals International Board of Directors. Since 1979, CENTURY 21 has raised more than $111 million in support of Easter Seals.

The Dixon Center leverages Easter Seals’ nationwide network of community-based program locations, while working with private and public sector leaders in communities to create better ways for our veterans and military families to succeed in meaningful employment, education, and overall wellness.

Colonel Sutherland was invited to speak by Realogy’s SERVICE Committee. In 2014, Realogy formed this committee that stands for Supporting Engagement of Realogy Veterans in Committed Effort. The committee, which coordinated the event that brought Colonel Sutherland to Realogy’s headquarters, is comprised of 30 employees across Realogy’s business units who work on attracting and recruiting veterans, active military and military spouses; making Realogy a better place to work for our veterans; and community service. During 2014, Realogy hired 36 military veterans by participating in diversity job fairs and military veteran recruiting initiatives. Realogy also provides accommodations to help those with disabilities begin work with the company or return to work with the company.

Christie Administration Partners with U.S. Chamber of Commerce and American Legion to Connect Veterans and Military Spouses with Jobs at Career Fair