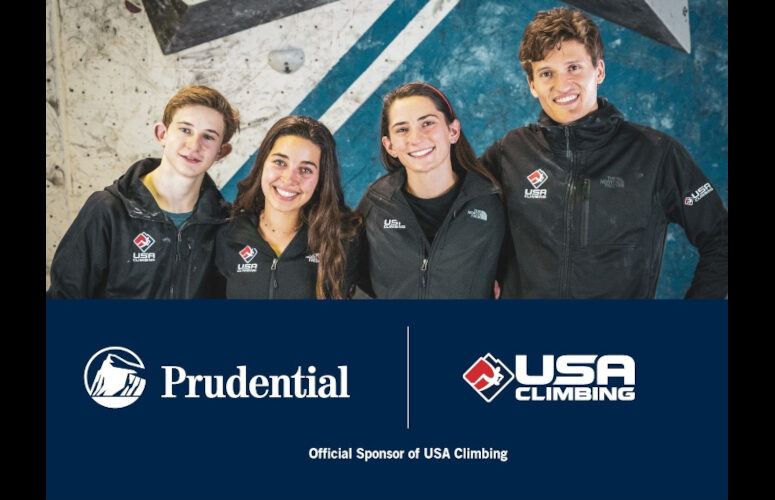 Newark-based Prudential Financial, Inc., known for its iconic Rock logo, announced its sponsorship of USA Climbing, which won silver in the sport’s debut at the Olympic Games in Tokyo. The partnership celebrates a new generation of inspirational American athletes who represent the future of climbing and embody Prudential’s shared attributes of strength, performance, and reaching new heights.

Prudential saw the promise in the inspiring athletes who are climbing higher, recognizing the importance of teamwork in sport and life, just as the company strives to drive growth for clients, employees and investors. Prudential’s sponsorship is aimed at building talent, supporting training and travel for international competitions, and elevating the team’s presence and success globally.

“Bringing together the sport of climbing and Prudential’s iconic Rock represents the strength and resilience it takes to shatter boundaries,” said Susan Somersille Johnson, Prudential’s chief marketing officer. “It takes a huge amount of discipline, dynamism and daring to dream big to compete for the first time on the world’s biggest athletic stage.”

The partnership will help shape the next generation of athletes and fans by getting more people of all ages and abilities into climbing, as well as introduce the sport to diverse communities. Prudential’s sponsorship of the sport’s national governing body includes partnerships with the first four athletes representing the United States at the games—Men’s Combined silver medalist Nathaniel Coleman (Salt Lake City), Brooke Raboutou (Boulder, Colorado), Kyra Condie (Salt Lake City), and Colin Duffy (Broomfield, Colorado).

“Our partnership with Prudential is a milestone for us as it takes USA Climbing and our athletes to new heights and diverse audiences well beyond our sport,” says Marc Norman, USA Climbing’s chief executive officer. “There is so much synergy between climbing and what Prudential stands for: both emphasize agility, speed, and teamwork for peak performance.”

Prudential brought back its iconic Rock symbol to the forefront of a new advertising campaign called “Who’s Your Rock?” The spirit of rock climbing goes hand in hand with the company’s focus on providing Rock Solid financial solutions, planning and investments, and supporting people to find their “rocks” as the importance of strength and resilience endures—especially as financial security remains an elusive goal for many.

The full campaign runs through December and will feature marquee activations during bedrock cultural moments in the U.S., such as the reopening of Broadway and Macy’s Thanksgiving Day Parade.