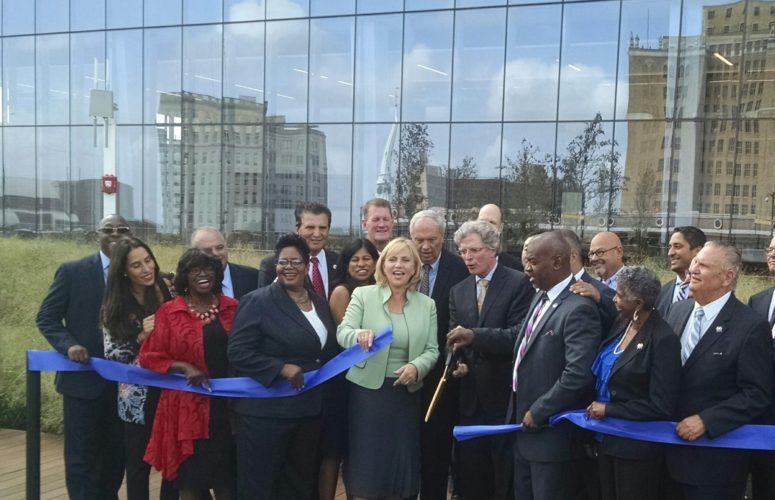 Located at 655 Broad Street and designed by Kohn Pedersen Fox, the 740,000-square-foot, 20-story building is the workplace of nearly 3,000 Prudential employees and has expanded the company’s Newark campus. The new tower is located two blocks from Prudential’s global corporate headquarters at 751 Broad Street and three blocks from its Washington Street building.

“Prudential has called the city of Newark home since our founding, and our commitment to ensuring the success of this vibrant community has been steadfast,” said Strangfeld. “We’re proud of this new office tower—it’s a beautiful, state-of-the-art, eco-friendly building. But it’s more than that. It’s also a reaffirmation of our dedication to Newark and a symbol of the bright future that lies ahead for the city and our company.”

To further support urban renewal in the neighborhood around the tower, Prudential has made more than $150 million in investments in downtown revitalization projects, such as the redevelopment of the historic Hahne & Co. Building, the restoration of Military Park and the conversion of the former National State Bank building into Hotel Indigo. These projects, along with other investments, are helping revive the area that once served as Newark’s town commons through the addition of:

“Prudential’s new tower serves as a powerful symbol of Newark’s transformation and the company’s 140-year commitment to its hometown,” said Lata Reddy, vice president of corporate social responsibility at Prudential and president of The Prudential Foundation. “In partnership with Newark’s residents and our corporate and civic partners, we are catalyzing strategic investments that will help realize our goal of building a stronger, more vibrant city.”

“The City of Newark welcomes the new Prudential Tower to our skyline and our community,” said Newark Mayor Baraka. “This impressive structure speaks of an urban renaissance. It has revitalized the downtown community and brought renewed energy to area businesses. Prudential’s example is assisting us in transforming downtown Newark into a vibrant destination for employers, workers, residents and visitors alike.”

The building has many environmentally friendly features, including:

The tower’s grand opening also marks the launch of “20 Stories of Strength,” a campaign to celebrate the new building and commemorate the history Prudential shares with Newark. Using the hashtag #20StoriesofStrength, Prudential will share photo and video vignettes on Instagram, Facebook and Twitter. These engaging, social media vignettes will highlight 20 community champions who are writing the story of Newark.

Funding Support for a New University Hospital Facility in Newark