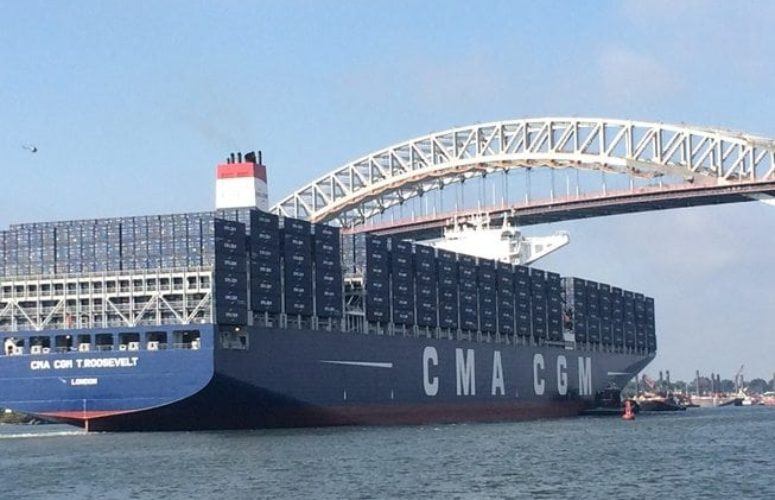 The Port Authority announced that cargo volumes in the Port of New York and New Jersey set a new record for the first half of 2018, with volumes up 6.8 percent over the same period in 2017, when the previous six-month record was established.

Between January and June this year, the port handled 3,450,469 TEUs (20-foot equivalent length cargo containers), compared to 3,229,675 TEUs handled during the same period in 2017.  The increase was fueled by a 7.8 percent hike in loaded import containers, primarily carrying commodities such as furniture, appliances and beverages.  Export loaded containers also increased by 9.2 percent, further boosting the increase. The record volume has allowed the port to maintain its position as the busiest on the East Coast.

A primary factor driving the cargo increase is last June’s completion of the $1.6 billion Bayonne Bridge Navigational Clearance Project, which raised the clearance capacity under the bridge from 151 feet to 215 feet, allowing ships as large as 18,000 TEUs to pass underneath it.  Previously, the maximum vessel size was 9,800 TEUs.  Currently, 9.1 percent of the port’s cargo is carried on vessels that are 13,000 TEUs or larger.  Prior to the bridge raising, ships of this size were limited to terminals located outside the Newark and Elizabeth channels.  Other factors driving the cargo volume growth are a strong and growing regional economy and growth in intermodal cargo.

“We are committed to continuing the substantial investments we’ve made in the port to maintain its position as a strong generator of jobs and economic activity in New York and New Jersey,” said Port Authority Chairman Kevin O’Toole.  “This port already supports 400,000 full time jobs in the bi-state region that generate $25.7 billion in wages, and given the substantial rise in cargo volumes this year, those numbers will only increase over time.”

“The capabilities of the Port of New York and New Jersey have never been more vividly on display.  These record-breaking numbers demonstrate the port’s strategic appeal to cargo shippers and distributors,” said Port Authority Executive Director Rick Cotton. “Now, we must continue to move forward with all of our port stakeholders to meet the challenges that lie ahead to handle even greater volumes of cargo.”

“We are laser focused on improving the port’s infrastructure and operations, which, coupled with the completion of the Bayonne Bridge project, are paying major dividends and providing a tremendous boost to our business,” said Port Authority Port Director Molly Campbell.  “Our goal is to continue the momentum we’ve built and to show international shippers that our port is best equipped to handle their cargo.”

During the first half of the year, the port’s ExpressRail – the Port Authority’s ship-to-rail system serving New York and New Jersey marine terminals – also was on record pace for the year.  During the first six months of 2018, ExpressRail handled 315,011 lifts, up 15 percent from the previous record in 2017, when 273,991 lifts were handled.

The Port Authority anticipates that cargo transported by rail will continue to grow after its newest rail facility – ExpressRail Port Jersey – opens at the end of 2018.  Once that facility opens, it will give the port the capacity to handle 1.5 million container lifts a year – and eliminate 2,250,000 annual truck trips from local highways – far greater capacity than any other East Coast port.

In addition to cargo containers, the port also reported a 6.2 percent increase in vehicles handled by auto processors serving the port – from 264,766 units handled in 2017 to 281,224 units handled in 2018.  The increase is due in part to the Auto Incentive Program launched in 2014 to provide financial incentives to auto manufacturers who bring new or increased business to the port.

The Port of New York and New Jersey currently supports 400,000 full time jobs in the region and $25.7 billion in personal income wages in the New York-New Jersey region.

Santa Port is Coming to Town