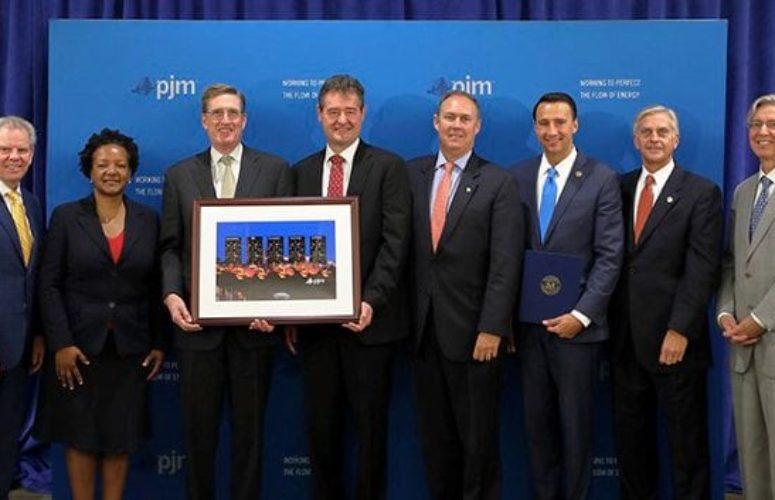 PJM Interconnection has worked behind the scenes for the past 90 years to ensure that the nation’s largest power grid is reliable and its wholesale power prices are competitive. Recently, light was shined on that accomplishment, with U.S. Rep. Ryan Costello, industry leaders and state and federal regulators, including Commissioner Robert Powelson of the Federal Energy Regulatory Commission, joining in to observe the historic milestone.

Notable among the crowd were the current CEOs of the three pioneering electric companies that laid the foundation for PJM.

“In September 1927, PECO, PPL and PSE&G collaborated to bring to life an ingenious idea – a power pool,” said PJM CEO and President Andrew L. Ott. “This is a historic day for PJM. Today, we honor our employees, our history, our members and most importantly the tremendous responsibility we share with members to keep the lights on for 65 million people in 13 states and the District of Columbia.”

A 1925 cost-benefit analysis of the proposed Pennsylvania-New Jersey Interconnection predicted the magnitude of benefits, saying, “The economies of the interconnection would be considerable and the advantages many.” At the time, the estimated annual net savings of operating collaboratively were $3 million.

“Today, PJM’s regional coordination saves people about $3 billion annually,” Ott said. “To think we began in the basement of the PECO building and have grown to 700 employees and more than 1,000 members is incredible and a testament to the hard work and dedication of our employees.”

The current CEOs of the founding companies made remarks on their shared history and the value PJM brings to the industry and to consumers.

Denis O’Brien, senior executive vice president of Exelon Corp. and CEO of Exelon Utilities, presented PJM with a photo of the Philadelphia skyline with a message that scrolled in lights at the top of the PECO building: “Congratulations PJM Interconnection, Working to Perfect the Flow of Electricity for 90 yrs!”

“The work of PJM employees is critical to ensuring homes and businesses have a reliable and efficient source of power,” Costello said. “Overseeing the largest power grid in North America, PJM has been a vital part of our national energy infrastructure for the past 90 years. And PJM continues to do an outstanding job keeping the lights on for approximately 65 million people by demonstrating extraordinary leadership and embracing innovation in the constantly evolving utility industry.”

Richard Mroz, president of the New Jersey Board of Public Utilities; Gladys Brown, chairman of the Pennsylvania Public Utility Commission; and FERC Commissioner Robert Powelson also made remarks on PJM’s contribution to the industry.

“Since its inception in 1927, PJM has played a critical role in managing our bulk power system. From withstanding catastrophic weather events to maintaining grid security, PJM continues to bring value and reliability to consumers across the 13-state compact that it serves,” said Powelson. “Congratulations to PJM for keeping the lights on and ‘doing the boring well’ for the past 90 years.”

The market, now the model used around the world, leverages competition to reduce costs, increase efficiencies and foster innovation in the electric industry.