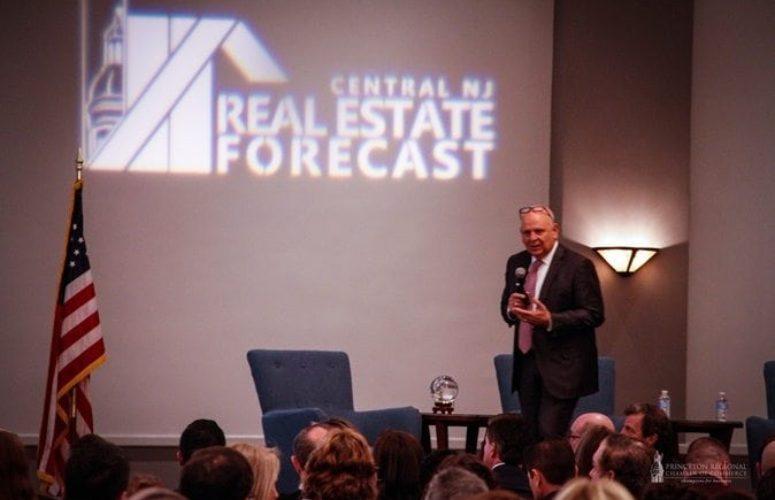 The event, held at the Princeton Marriott at Forrestal, saw Jeffrey G. Otteau, president, Otteau Group Inc., deliver an in-depth keynote address, which touched on the economy, the impact of the new federal tax plan, and industry disruptors such as changing demographics and exponential technological advancement.

Otteau highlighted the current strength of the national economy, which has seen seven years in a row of more than 2 million jobs being created on an annual basis. “This expansion is so powerful, that in March, this will be one of the longest economic expansion cycles ever in the United States,” he said, adding that, “At 4.1 percent, US unemployment is the lowest that it has been in eighteen years.”

As for New Jersey as a whole, Otteau said the picture isn’t quite as bright, though that is likely due to the state’s high cost of living, high rate of taxation and high level of regulation.

“In 2017, preliminary estimates indicated that [New Jersey] experienced a 34 percent drop in job creation. The good news is [that], we are still creating more jobs, but that growth is far more muted here than in other places,” Otteau said. Additionally, New Jersey’s unemployment rate is one percentage point higher than the national rate, and currently sits at 5.1 percent.

Otteau points out that the central New Jersey region’s economy is outperforming the rest of the state, boasting the lowest unemployment and highest income rates. In fact, in many cases, these rates are better than the national rates. “The [central New Jersey counties] have the most vibrant real estate markets in the state because this is where income and economic strength are greatest,” he said.

Otteau reiterated the fact that federal tax reform will be a positive for the real estate industry in the state.

“Tax reform will not have any short term disruptive effects on the housing market, because tax payers – even in New Jersey – will have more money in their pockets at the end of the day. … Tax reform is going to have positive effects on the larger US economy,” Otteau said. “[Additionally], the next recession is no longer in sight – it will take a black swan, something that no one expected to happen, to bring the economy into recession any time in the next couple of years.”

The overall health of the economy is certainly a positive for the industry, but as Otteau pointed out, there are still a number of disruptors that need to be monitored and acknowledged, as their impact will be significant. Among these are technological advancement in all industries and automation impacting available jobs and the need for building space – as seen through present changes such as e-commerce and consumer desire for same-day delivery – as well as changes that are still a few years off such as digital health monitoring of patients, which could drastically alter the demand for medical office space.

Additionally, the housing market is being impacted by millennial trends such as the desire to live near transit hubs and city centers – in many ways mirroring a European model, according to Otteau – as well as single and two-person households becoming more common, as couples are deciding to have children much later in life than in the past.

Millennial – and even Generation Z – trends are also being felt in the office market, as the desire for open work environments increases.

“The millennials are driving demand for office space with amenities, both within the building and outside in the surrounding area,” said Aubrey Haines, CEO, Mercer Oak Realty. “This ‘European environment’ is such that within your office space you have a restaurant and a bar or other similar amenity nearby. This type of environment is interactive.” Haines added that a similar phenomenon is happening in retail, with the retail experience becoming more social and interactive, as opposed to someone just going somewhere, buying something and leaving.

“One of the things that we have to do, and everybody in this room has to do, is be a voicebox for the misperception in regards to the tax plan,” added Henderson.