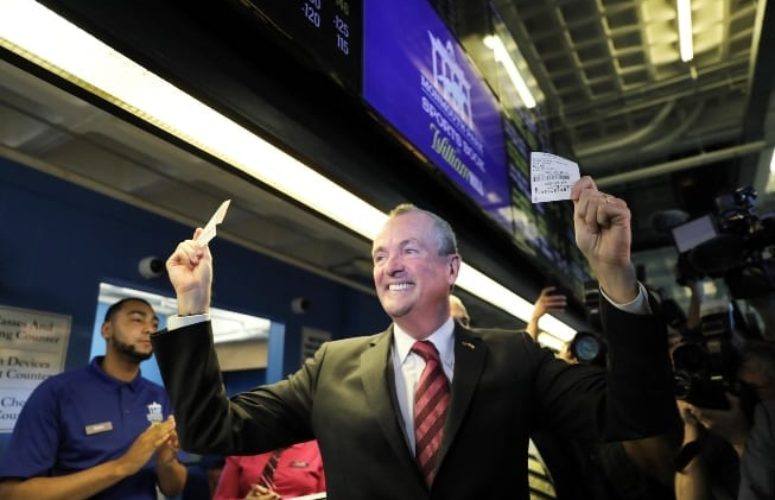 Officially Wagering on Sports in NJ? You Bet.

“I’m betting $20 on Germany to win the World Cup, and $20 on the New Jersey Devils to win Lord Stanley’s cup,” Murphy was quoted as saying per NJ.com.

Former state Sen. Ray Lesniak, D-Union, who sponsored legislation in 2012 and 2014 to enact legalized sports betting in the state, was in attendance as well.

“It was a long fight, with the odds against us, but New Jersey spirit and determination prevailed,” Lesniak said, per NJ.com.

“We knew in our heads we were right,” added Murphy. “And we knew in our hearts that we would win. And we did.” Murphy thanked Lesniak and former Gov. Chris Christie, whose administration spearheaded the case for seven years before Murphy took over as governor in January.

Shortly after the governor officially kicked off sports betting in the state, Senate President Steve Sweeney was joined by Philadelphia sports legend Julius Erving at an inaugural event to launch sports betting in Atlantic City’s casinos.

The two men placed the first sports wagers in Atlantic City at the Race & Sports Book at the Borgata Casino, placing wagers on the Green Bay Packers and Philadelphia Eagles respectively to win next year’s Super Bowl. The Borgata will be the first New Jersey casino to open a sports betting parlor.

Following the May 14 U.S. Supreme Court decision to strike down a federal ban on sports betting, Borgata President Marcus Glover announced the casino hotel’s intention to begin taking bets “as soon as regulatory approvals are in place.” The casino also announced plans to construct a $7 million sports book facility, which will be in addition to the existing sports book on the property.

Under the legislation signed by Governor Murphy, a licensed casino or racetrack may accept wagers at a sports wagering lounge at its respective premises, and can petition to operate a sports pool at a temporary facility during the construction of a sports wagering lounge. In addition, licensed casinos and racetracks can seek to operate an online sports pool beginning 30 days after the effective date of the bill.

Individuals placing wagers must be at least 21 years of age. The bill also provides that athletes, coaches, referees, and other persons with potential influence or access to non-public information regarding sporting events, are prohibited from placing bets on sporting events overseen by the league in which they participate. Additionally, wagers cannot be placed on high school sporting events or collegiate athletic events taking place in New Jersey or involving New Jersey teams.