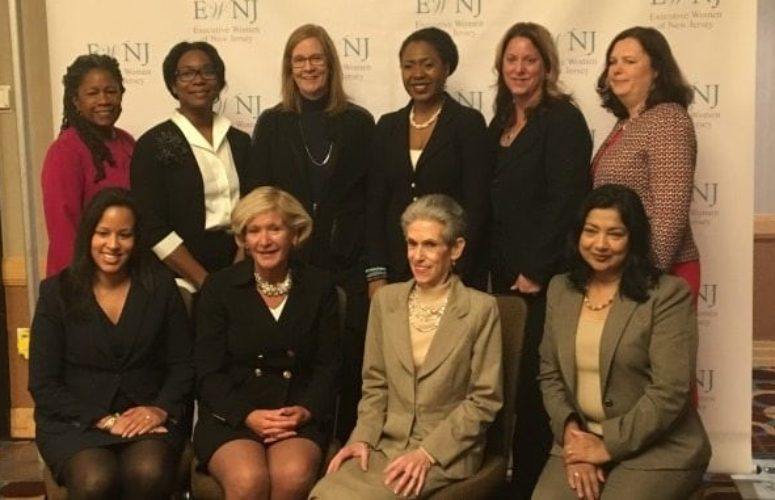 Executive Women of New Jersey (EWNJ) yesterday hosted A Seat at the Table Corporate Gender Diversity Awards Breakfast at the Heldrich Hotel in New Brunswick – a biennial event where the organization exclusively releases its much-anticipated report on the number of women serving on boards and in the top leadership of publicly traded companies in New Jersey. The report, “A Seat at the Table: Celebrating Women and Board Leadership,” is the only one of its kind in the state.

In addition to the exclusive release of its groundbreaking 2017 report, EWNJ recognized 22 companies that made its Honor Roll, a list that spotlights New Jersey public corporations that have three or more women serving on their boards.

NEW JERSEY BUSINESS has obtained a copy of the detailed, 16-page report (the report’s research was conducted by PwC) and presents here a few samples of its findings.

The report adds, “While these numbers have improved slightly since 2015, women are nowhere near reaching parity with men in board representation.  Only one of the 95 New Jersey companies in our sample has reached 50 percent board membership for women.”  That company is American Water, whose CEO is Susan Story.

Prior to the event, Michellene Davis, Esq., president of EWNJ and executive vice president and chief corporate affairs officer at RWJBarnabas Health, explained, “The A Seat at the Table Breakfast and report are critical components of our ongoing efforts to raise awareness around the issue of gender diversity in senior corporate governance. While we still have a long way to go in ensuring that women and people of color have equal access to opportunity in top corporate leadership, we’re seeing that our work is making an impact. We’re proud that several CEOs are partnering with us to support our work and to bring change within their companies.”

“We’re grateful to PwC for providing the research for our report for a third year; this support is invaluable to our work,” added Barbara E. Kauffman, president elect of EWNJ, chair of the EWNJ Board Appointments Committee, and chief operating officer at the Newark Regional Business Partnership (NRBP). “This year’s report focuses on the role that outside influences such as shareholders and investors play in moving the needle on gender parity in corporate culture. We’re excited that through this year’s report, we’ve created strategic alliances with some of these key influencers in order to expand our reach.”

Private-Sector Employment Dips in May