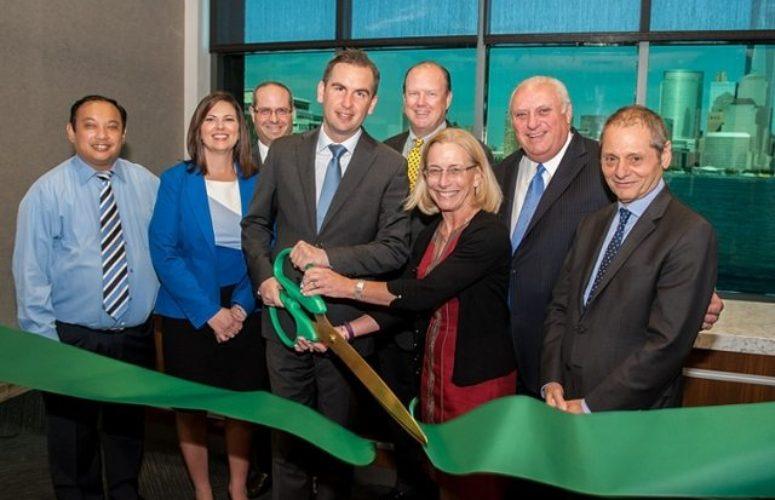 NJTV, New Jersey’s public television network, and New Jersey City University (NJCU) announced they will partner on a new business update segment to be broadcast from the NJCU School of Business as part of NJTV’s weeknight newscast, NJTV News with Mary Alice Williams. The updates will be produced on location at the Strategic Development Group Studio at the NJCU School of Business located at Harborside Plaza 2 in the Jersey City financial district. The new space was celebrated at a ribbon-cutting event at the School on June 1st with network and University principals, business leaders and local dignitaries in attendance including Jersey City Mayor Steve Fulop, Deputy Mayor Marcos Vigil and others.

The studio was made possible through major gifts from the Strategic Development Group (SDG) to NJCU for construction of the facility and NJTV to equip the studio with the latest broadcast technology. Anthony V. Bastardi, chairman and chief executive officer of SDG, is a vice chair of NJTV’s Board of Trustees.

he new segments will report business and financial news happening across New Jersey from a state-of-the-art studio space with a windowed backdrop on the Jersey City waterfront overlooking Wall Street.  The reports will be integrated into the NJTV News with Mary Alice Williams newscast, which airs weeknights at 6:00 p.m., 7:30 p.m. and 11:00 p.m. on NJTV (check local listings).

In announcing the segment, NJTV General Manager John Servidio said, “The addition of a regular weeknight business report is another step in the evolution of NJTV News and the network.   We’re covering the issues in the state better than ever before, and we are proud to partner with NJCU to make it happen.”

NJCU President Sue Henderson remarked, “NJCU is delighted to host the NJTV News weeknight business report and to broadcast financial news from our School of Business, a high-tech facility that is situated in the heart of New Jersey’s business hub.”

Dr. Bernard McSherry, interim dean of the NJCU School of Business, noted, “Having NJTV’s business news broadcast to the metro area from a studio overlooking Wall Street at the NJCU School of Business sends a powerful message.  This is an opportunity to let the business community and students everywhere know that NJCU is the place to go for business news and business studies in New Jersey.”

“Everyone at Strategic Development Group is very proud to support the efforts of NJTV and NJCU in this endeavor,” said Bastardi. “The more local news and information available to New Jerseyans, the better.”