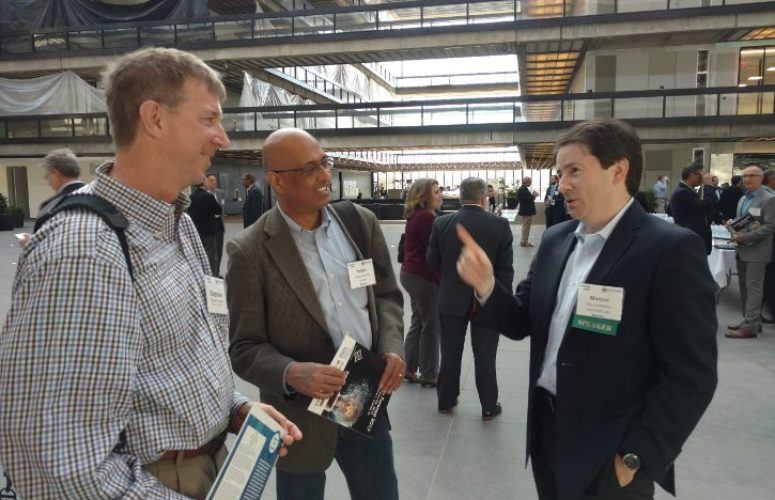 While presentations from both well-established and younger entrepreneurial high-tech firms were made at The New Jersey Tech Council’s Innovation Forecast 2017, held recently at the 2-million-square-foot Bell Works facility in Holmdel, what was reassuring to the audience of technology business owners, NJTC members and guests was that these are good times for companies seeking venture capital, but there are some caveats.

In a panel discussion on the topic, Gil Beyda, founder and managing partner of Genacast Ventures (a seed fund formed in partnership with Comcast Ventures) said that investment money is “available now more than ever,” with countless angel investors, seed stage, institutional and larger funds in the game. In fact, he is seeing companies, which his firm may have passed on, get funded.

Jay Bhatti, founder of BrandProject, also said there is plentiful capital available, but he is seeing a trend in which companies that were previously funded, are not getting funded again. “They get the initial round, but no follow up [funding] because the businesses may have lost traction,” he said.

Taking the micro view on the status of venture funding in New Jersey was Kathleen Coviello, director of the Technology and Life Sciences division at the New Jersey Economic Development Authority (EDA), who said the state was lagging national trends in terms of attracting venture capital, but now, “things are frothing for entrepreneurs who want to access capital.”

She said the EDA is involved in a dozen venture funds, including the recent commitment of $7.5 million to the NJTC Venture Fund and its participation in the Newark Venture Partners fund.

The EDA also oversees the state’s Angel Investors Tax Credit program. Coviello said 57 unique companies received $96 million in funding through the initiative, with average investments between $500,000 to $1 million dollars.  She also discussed other EDA tax inventive programs for businesses and the authority’s high-tech real estate offerings, such as its New Jersey Technology Centre in North Brunswick.

Ralph Taylor-Smith, who works in the advanced manufacturing group of GE Ventures, where he invests in hardware and software companies, says investment money is available, but the sources of capital have changed. More money is coming from China and the Middle East, he said, while the overall number of financial firms has decreased. The difference is being made up by corporate investors.

Jim Barrood, president of the NJTC, said the Innovation Forecast was developed to highlight innovation coming from the state mid- and large-sized companies. He said it made sense to hold the event at the 2-million-square-foot Bell Works, a former Bell Labs site because it is “a place where so many gems were invented.”

Ralph Zucker, president of Somerset Development, which has been busy redeveloping the famous structure, commented, “Our mission is to create a great place for great people. In repositioning Bell Labs into Bell Works, the biggest challenge is celebrating what Bell Labs has created.

“We are taking advantage of the collaborative nature of the building to inspire and enhance innovation. … This is a metropolis in suburbia,” he said.

Marcus Weldon, president of Nokia Bells Labs, the event’s keynote speaker, touched upon the future role of Bell Labs, which he said is to “invent the future of human experience,” as the firm has always done through innovations such as the transistor, computer operating systems and fiber optics.

Today’s challenge, he said, is to increase the mental ability to think as we encounter and process more and more data. “Big data is a lot of pure noise,” he said. The answer is working with small data – accessing the data that is truly valuable.

Weldon also commented that cloud networks will be closer to end users as the digital and physical worlds get more connected with more devices (other than smart phones).