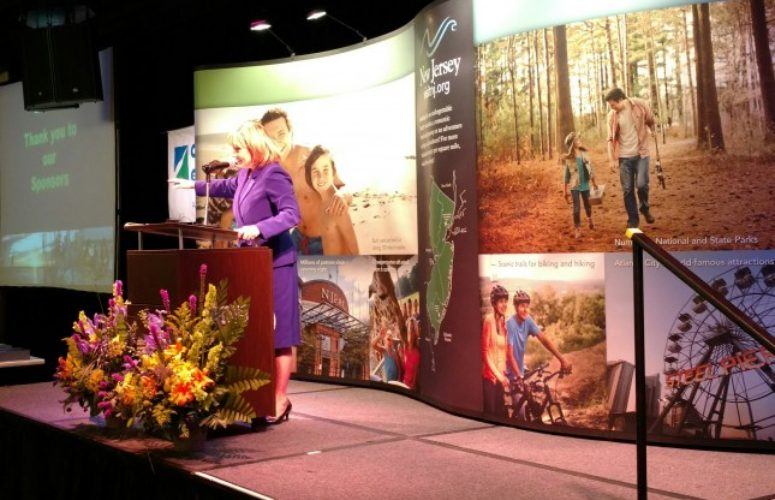 The economic impact of New Jersey’s tourism industry continues its positive trajectory since Superstorm Sandy. The industry generated $43.4 billion in 2015. This is a 3.3 percent increase from 2014’s figure of $42.1 billion. Meanwhile, overall visitations increased by 2.4 percent. From the northern attractions in Bergen and Sussex counties to the southern attractions in Cape May and Atlantic counties, plus everything in between (from the Atlantic coastline to the banks of the Delaware River), the state’s travel and tourism industry employs 318,000 direct workers. More than half a million workers are supported by the industry if the impact of indirect jobs is included.

These figures and more were revealed this afternoon by Lt. Governor Kim Guadagno during the first day of the two-day 2016 New Jersey Conference on Tourism, held at the Resorts Casino Hotel in Atlantic City.

“We are doing better, and you really outdid yourselves after Supertorm Sandy, Hurricane Irene and, more recently, Hurricane Douglas,”  the Lt. Governor said to tourism industry leaders gathered at an afternoon  luncheon.

She commended the crowd for leveraging $2 million in state support into the $43.4 billion generated.

The good weather played a part in the numbers increase, which brought tourism back to the Jersey shore.  Beach badge sales in Manasquan topped $1.9 million, while they topped $1 million in Lavallette. Meanwhile, Asbury Park beach-badge sales increased by 41 percent.

Guadagno, who is a Jersey Shore resident, wanted to focus on other parts of the state and said that 52 percent of the tourism dollars generated came from outside the shore region. Passaic County experienced a 9.9 percent increase in tourism dollars, while Hudson County experienced an 8.6 percent increase, and Cumberland County, 8.8 percent, for example.

Today was also the last day that Sharon Franz served as president of the New Jersey Travel Industry Association. Franz, who is also the sales and marketing director for the Steel Pier in Atlantic City, said the past few years have  been a “roller coaster” ride for the industry, but “we brought the industry back.”