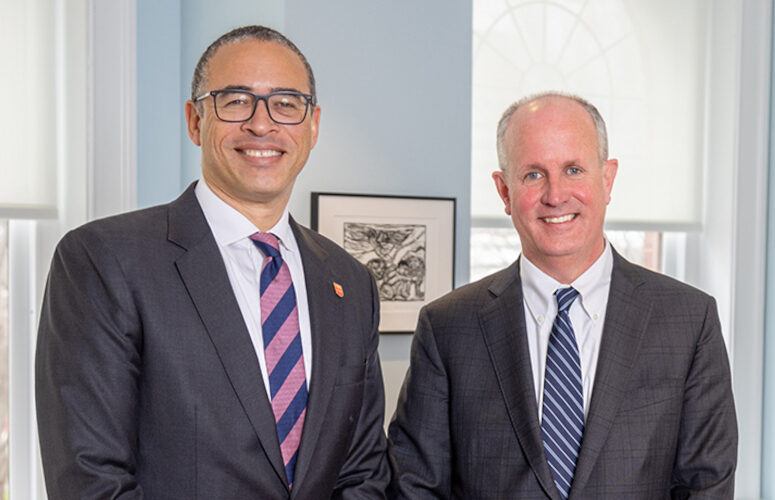 “This contribution from NJM makes a powerful statement to young people in our communities about how much we believe in them and their capacity to change the world,” Holloway said. “I am deeply grateful for NJM’s commitment to increasing New Jersey residents’ access to higher education.”

Each year, Rutgers Future Scholars offers 200 New Jersey middle school students from New Brunswick, Piscataway, Newark, Camden and Rahway the opportunity to prepare for college. The summer before they enter eighth grade, the students join a pre-college culture of university programming, events, support and mentoring that continues through their high school years and, eventually, college.

Brielle Gorrell, who joined Rutgers Future Scholars in seventh grade and graduates from Rutgers this year with a double degree in public health and Africana studies, says the program gave her the support and resources to chart a path to becoming a professor of Africana studies.

“Rutgers Future Scholars helped to instill confidence in myself,” Gorrell said. “After the program, I knew when you walk into this space, you are capable. It gave me an opportunity where I was really in control of my narrative as a young Black woman and where I wanted to see myself. It’s crucial – it offers possibilities.”

Gorrell says that programs like Rutgers Future Scholars help college-bound youth from families with little understanding about navigating college life and provides a support network that extends beyond the program.

Scholars are expected to complete their regular schoolwork in addition to the program’s requirements. Those who successfully complete the five-year program and are admitted to Rutgers receive full-tuition funding through scholarships and federal grants.

“NJM and all those who support Rutgers ensure that a college degree will be a promise fulfilled for our next generation of leaders,” Holloway added. “That promise knows no boundaries and seeks out excellence wherever it is to be found.”

Holloway said that NJM’s contribution is foundational to Rutgers’ efforts to broaden and deepen the Scarlet Promise initiative, which comprises a range of programs that break down financial and other barriers preventing many talented students from attending the university and graduating on time. At his November inauguration, the president called on the university to raise $50 million over the next three years in support of Scarlet Promise.

“NJM has a proud history of supporting educational initiatives, especially those that empower underserved students and provide access to higher education. We know that there are challenges in the pursuit of a college degree,” said Mitch Livingston, a Rutgers alumnus and NJM president and CEO. “The Rutgers Future Scholars program has a proven track record of meeting this need, and we are pleased to provide this contribution as part of our core value of supporting the communities we are privileged to serve.”

NJM is among the Mid-Atlantic’s leading property and casualty insurers. Founded in 1913, NJM’s mission is to provide value-based insurance solutions to its policyholders with the highest levels of service, integrity, and financial stewardship. The company operates in a mutual fashion for the exclusive benefit of its policyholders. Headquartered in West Trenton, New Jersey, NJM employs nearly 2,500 workers.

Aramis Gutierrez, director of Rutgers Future Scholars, praised NJM for the company’s latest contribution and longtime support for the program.

“For nearly 10 years, NJM’s generosity has supported scholars in this pre-college program,” Gutierrez said. “The impact that this level of support has had on our students is nothing short of remarkable. Scholars know they belong, that they can succeed, and that there are champions like NJM who care deeply about their hopes and dreams. We are truly honored to have NJM as a part of the Rutgers Future Scholars family.”

Funding Support for a New University Hospital Facility in Newark