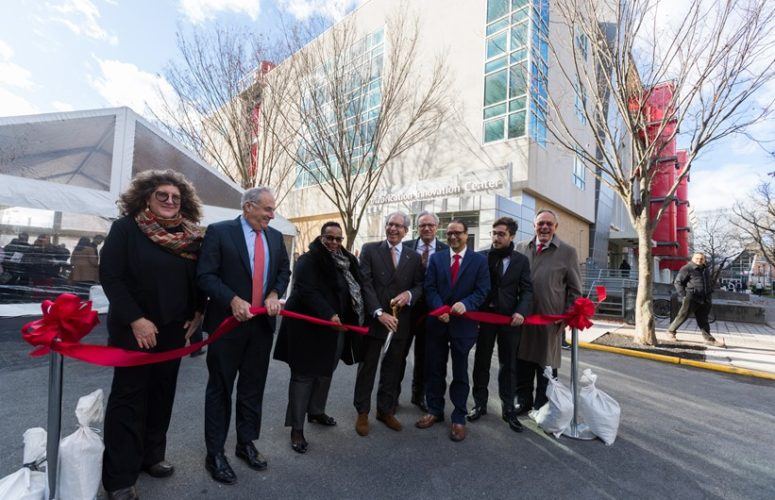 The New Jersey Institute of Technology (NJIT) had a busy day today using scissors to cut the ribbon on two new facilities. In Newark, the higher education research institution opened a Microfabrication Innovation Center (MIC) that will develop micro- and nano-electronic devices and sensors for the medical device and other industries. In Jersey City, the institution opened the Ying Wu College of Computing (YWCC) on the 36th floor of 101 Hudson Street, Jersey City, to meet the demand for fin-tech data scientists and professionals in Hudson County and New York City.

According to Dr. Joel Bloom, NJIT president, the MIC will benefit New Jersey’s medical device industry by developing small sensors that are “finer and less visible than the hair on your head,” that will tell a surgeon what is malfunctioning in an existing body implant. “This will reduce the need or even prevent costly surgical procedures,” Bloom told New Jersey Business.

The MIC is being funded by a two-year, $7.4-million state grant (for equipment and space) and just over $1 million from NJIT’s operating budget plus research grants. According to estimates calculated by Philadelphia-based EconConsult Solutions, the center will have an estimated $42-million economic impact on not only the medical device industry, but a large range of other manufacturers that can take advantage of this micro-technology in their products and processes. The estimate is based on a 14-to-1 ratio that multiplies the average $3-million annual R&D output value of the 10 NJIT researchers working at the MIC by 14.

The technologies emanating from the MIC will be licensed to companies. Additionally, companies participating in NJIT’s Makerspace facility can also take advantage of MIC innovations.

Commenting on the Ying Wu College of Computing, Bloom says, “The reason we are in Jersey City is because that is where the need is. Hudson County, and primarily Jersey City, is where the back-office operations for New York City’s fin-tech industry are located.”

He said the location is also a transportation hub for many New Jersey residents working in New York City’s banking and financial markets. NJIT wanted a location that was convenient for those workers who wanted to continue their training and education. “We wanted to make it convenient for students to get off a PATH train or light rail line and take a class,” Bloom explains.

The new location is just steps away from the Exchange Place PATH station in Jersey City.