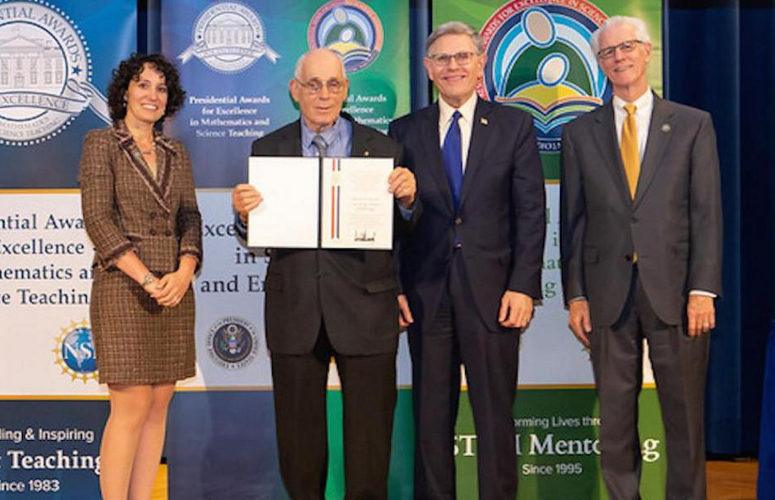 Howard Kimmel, professor emeritus in chemical engineering at New Jersey Institute of Technology (NJIT), has received a Presidential Award for Excellence in Science, Mathematics and Engineering Mentoring (PAESMEM). He is one of 15 awardees nationwide and the only recipient in New Jersey this year.

Bestowed by the National Science Foundation in partnership with the White House Office of Science and Technology, the achievement recognizes the strong contributions made by the recipients in expanding, enhancing and retaining science, technology, engineering and mathematics (STEM) talent through mentorship. More specifically, the award acknowledges “the critical role mentors play outside the traditional classroom setting in the academic and professional development of the future STEM workforce” — supporting learners from kindergarten through college who “are often from traditionally underrepresented groups in STEM.” PAESMEM has paid tribute to both individuals and organizations since 1995.

“I am honored to have received the award in recognition of my efforts and achievements,” said Kimmel. “However, as a retiree, it means much more to me that it also recognizes the contributions of the many colleagues and staff that have collaborated with me on many initiatives, as well as the support of the NJIT administration. Without them, much of what has been accomplished might not have been achieved.”

Kimmel joined NJIT’s Newark College of Engineering in 1966 as an assistant professor of chemistry. He later began focusing on STEM education for elementary, middle and high school students, co-founding the Center for Pre-College Programs (CPCP) at the university in 1979. Since its inception, CPCP has increased access to scientific and technological fields among traditionally underrepresented populations and improved the teaching of science and mathematics in secondary and elementary schools. The center serves more than 3,000 students annually.

“Dr. Kimmel’s Presidential Award for Excellence in Science, Mathematics and Engineering Mentoring recognition makes us all very proud — and the timing is perfect as we celebrate CPCP’s 40th anniversary this year,” remarked Jacqueline Cusack, CPCP’s executive director. “When I asked Dr. Kimmel’s permission to nominate him for this award, I had no idea it would take more than three years to realize our goal, but it was well worth the wait. Special thanks to Dr. Levelle Burr-Alexander, director of special projects, and Amy Prince, our grant writing consultant back then, for the time and effort they committed to preparing the PAESMEM application.”

Kimmel accepted the honor at a ceremony in Washington, D.C. Oct. 17.

Toward a Brighter Economy and the Design-Savvy Workforce That Will Build it, NJIT Opens Makerspace