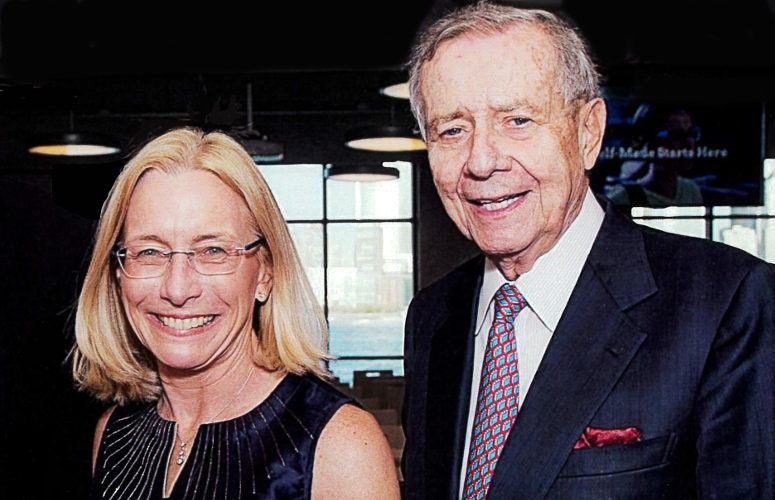 Dr. Henderson recognized Congressman Guarini for his lifelong commitment to the education of a global community comprising international and local institutions. His ongoing support of Hudson County’s students, through various gifts and initiatives through the years has transformed the higher education landscape and expanded opportunities for students to positively impact society.

The gift, the largest in the university’s history, will accelerate the progress the ninety-three year old Institution has made in recent years by establishing both the Frank J. Guarini Institute for International Studies and a state of the art community Performing Arts Center (PAC), the first of its kind in Hudson County. Plans for the PAC have already led to unique partnership between NJCU and the Joffrey Ballet School. The new facility will serve as home to the distinguished ballet trainer. Joffrey students and prospective college students may apply directly to the collaborative NJCU-Joffrey BFA in Dance program.

Dr. Henderson further noted, “For decades Frank Guarini has demonstrated his support of New Jersey City University and now, more than ever, is critical to the continued bright future of our community. On behalf of our students, their families and the generations of graduates to come, I want to thank Frank for his incredible generosity and investment in our vision and mission to empower all that call upon us. Both of these projects will significantly impact our County to create jobs, provide housing and foster Jersey City’s growth as a world class city to usher in a new era for our students and communities.”

Born and raised in Jersey City, Guarini received his Undergraduate and Juris Doctor and Master of Law degrees from Dartmouth College and New York University School of Law, respectively, and pursued advanced studies at The Hague Academy of International Law in the Netherlands. A decorated war hero, he served as a Navy lieutenant during World War II, for which he received the Naval Commendation Medal and three Battle Stars. Upon returning, Guarini joined Guarini & Guarini, the Law Firm founded by his father in 1917.

In discussing his long-term involvement with NJCU, he noted “NJCU has been a powerful advocate and important cornerstone of our community for almost 100 years. Dr. Henderson has brought a vision and vitality to this great institution and built an incredible team whose dedication to the needs of our students is impressive and inspiring. It has been an honor to witness their transformation under her leadership and I am proud to support these far reaching, impactful projects.”

Designed for the twenty-first century, the Guarini Institute will extend beyond regional and national boundaries and focus on three key areas: research that explores the inter-connections between the global future of work and higher education; preparation of students through abroad experiences and global work opportunities for the global future of work; and creation of international partnerships with institutions of higher education, businesses, and organizations that foster and advance the global nature of work.

“The Jersey City of tomorrow would not be possible without Frank’s support.  His transformational gifts to so many important institutions here will pave the way for generations to come and we are humbled to be a part of it. I am looking forward to announcing NJCU’s celebrations to honor this historic moment along with the important groundbreaking milestones as we forge ahead together through this challenging time.” concluded Dr. Henderson.