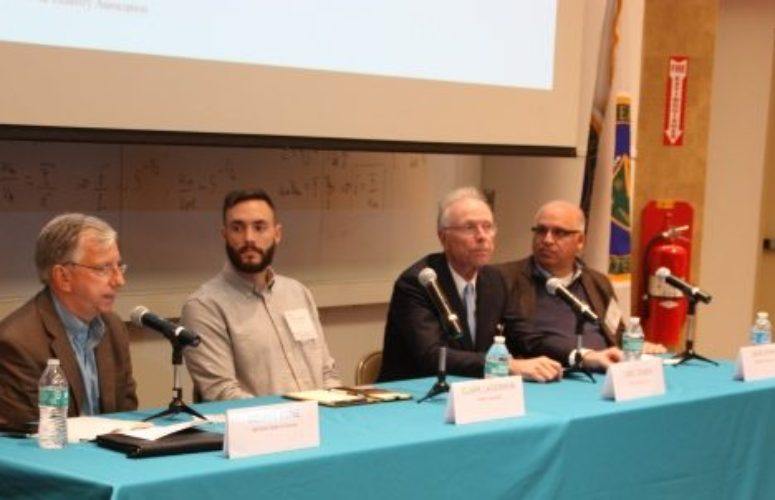 From left to right: Dennis M. Bone, director of the Feliciano Center for Entrepreneurship at the School of Business, Montclair State University; Clark Langemann, an experienced entrepreneur who is currently vice president of business development at MedPro Wellness; Greg Olsen, president of GHO Venures LLC; and David J. Sorin, an office managing partner of McCarter & English.

A second panel discussion at yesterday’s NJBIA’s Innovation Summit focused on tech-centric entrepreneurship in the Garden State and beyond, revealing that our region faces both challenges and opportunities in this realm, including, but not limited to issues surrounding: startup funding, higher education’s role in fostering entrepreneursip, and the proliferation of Millennials who aim to start their own companies. Dennis M. Bone, director of the Feliciano Center for Entrepreneurship at the School of Business, Montclair State University, moderated the panel.

Regarding startup funding in the broader markets, David J. Sorin, an office managing partner of McCarter & English and the head of its venture capital and emerging companies group, noted that there has been a decrease in the amount of capital necessary to start a company.

He said, “Ten or 15 years ago, it would have taken far more capital, and a far longer time period to get from conception to development, to commercialization, to positive cash flow and profitability. [The new dynamics] spur entrepreneurial activity to a very great degree. I think that is positive.”

Against this backdrop, Sorin noted an overall increase in monies available for capital investment in early-stage companies, precisely because less money is needed to start a company, and, therefore, investors experience decreased risk.  Corporate venture capital volume has likewise increased as large companies reduce risk by allowing outside entrepreneurs to develop products, as opposed to using their own, internal resources.

Sorin added, in part, that the lack of a robust IPO market presents challenges for entrepreneurs, but he nonetheless had optimism, prognosticating that new regulations “will help fill the vacuum, and create an alternative to IPOs.”

Greg Olsen, president of GHO Venures, LLC, said, “… there is a lot [of money sitting on the sidelines]. And the reason for that is investors are being much more selective, now, than they were, say, 15 years ago, during the dot-com boom.  So, while the money is there, you have to work harder to get it.”

The Role of Higher Education

What about higher education as it relates to tech-centric entrepreneurship? Sorin cited a wide array of accomplishments by New York-based universities, and stated, as a preface: “We are looking at how New York, and New York-related universities are, frankly, stepping all over us, in many ways.”

Meanwhile, Olsen said, “I think New Jersey is doing a lot.  I mean, just outside [the room here, today], you have Princeton, Rutgers, Stevens, NJIT and [Seton Hall]. And I think of all of these places, and they all  have very active programs to encourage entrepreneurship.”

He added, “There’s a slight danger, that sometimes you can overdo it: Not everyone is cut out to be an entrepreneur. In fact, I would say the majority of the population is not, and that is very important: Sometimes people think they should – or they have to – start up a company, just because that is what everyone is talking about.  I think the state and universities should provide the resources and the entrepreneurs have to reach out and get them. I don’t think the organizations should reach out to them, and pull them into entrepreneurship.”

Recurring topics in the panel discussion explored: the challenging realities of day-to-day entrepreneurship; the extent to which people are entrepreneurs “out of necessity”; diminished societal career opportunities for recent college graduates; and how such graduates might even concurrently have more than one employer.

Clark Langemann, an experienced entrepreneur who is currently vice president of business development at MedPro Wellness, told the audience, “When I quit my job (when he first became an entrepreneur), I thought being an entrepreneur was so sexy. I was like, ‘This is the greatest thing in the world; I have no boss. I am so into this.’ But, it is so damn hard. I mean anyone who is running a business: If you think it is easy … it is the hardest thing I have ever done, and every day I get challenged, and every day I [used to feel like] I [wish] I had my old job back. So, as much as I love seeing the interest and intrigue …  I’ve had people who I have hired and brought into my company, who – within a few weeks – were crying in my office, saying that they never realized how hard it was going to be.”

As for entrepreneurial challenges in New Jersey, Sorin said, “I love New Jersey and I think the tech community here is amazing.  There is so much that is being done, and that has been done, and will be done, here. But, one of our greatest challenges is the lack of a core center … If you go to Silicon Valley, you are running into other entrepreneurs and investors when you go into a coffee shop. When you go up to Boston, it is a big community, but everybody knows everybody, and you see the serial success stories, over and over and over, again.

“New Jersey – despite being the most densely populated state in the country – has no center of commerce for technology. I find that to be really frustrating.  The technology exists in all four corners of the state, but we don’t have a transportation system that allows us to be with each other, on a really efficient basis. And, so, we end up going to multiple events, in different parts of the state.  We don’t get to see how other people are solving the same problems that we, as entrepreneurs, have. I think that is truly one of the biggest challenges we have.”

As for opportunities, Sorin believes they abound in the business-to-business applications of virtual reality and augmented reality, and – coupled with that – the artificial intelligence arena.

He added, “We need to really step up our game, there. There’s a lot going on in other states, where universities and venture funds are partnering to create programs for spurring the growth of investor markets’ intelligence. I would hate to see us miss that boat.”