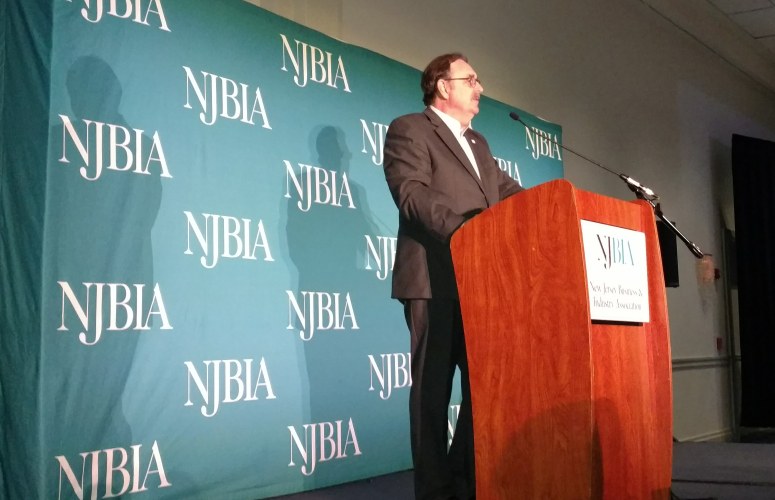 Last night, approximately 250 colleagues, friends and family members of Frank Robinson celebrated his 40 years of service in Trenton with an evening of heartfelt tributes for a man known as “Uncle Frank” and “a business-friendly Democrat” in the halls of the State House and throughout New Jersey.

Robinson is vice president of government affairs at the New Jersey Business & Industry Association (NJBIA) and executive director of the association’s Employers Legislative Committees (ELCs). The latter organization was also recognized during the evening’s ceremony on its 60th anniversary.

He is a man who “has been a mentor to many,” said NJBIA President Michele Siekerka at the event held at the Ocean Place Resort and Spa in Long Branch. Throughout his entire career, Siekerka said that Robinson “blazed a path of influence and relationships that were instrumental.”

“Anyone who knows Frank knows of his loyalty, dedication, quick wit, and ability to quietly solve a situation behind closed doors. He is a gentleman who can raise a ruckus or settle a storm,” Siekerka commented.

Longtime friend and colleague Melanie Willoughby, executive director of the New Jersey Business Action Center and former NJBIA chief government affairs officer, recalled meeting Robinson when they were both student leaders (at separate New Jersey colleges) organizing a rally in Trenton against a tuition increase.  “Our relationship flourished from there,” Willoughby said as she described campaign and lobbying stories throughout the years.

“Frank is flexible, someone who can roll with the times,” Willoughby continued, adding that NJBIA is a better organization for having Robinson on board.

See photos from the event on NJBIA’s flickr page

Assembly Speaker Craig Coughlin and other state legislators presented Robinson with a resolution “reflective of our great admiration and appreciation for the work you have done on behalf of the business community, and all of us,” Coughlin said.

He added, “Frank is one of those faces you see around the State House on a regular basis. He is one of the folks you get to know, because he matters. He has made Trenton a better place.”

Joseph Doria Jr., former Democratic General Assembly Speaker, State Senator, Mayor of Bayonne and Department of Community Affairs Commissioner, has known Robinson for the length of Robinson’s 40-year career. “When I was a young Assembly person, Frank was a crackerjack member of the Democratic State Committee. He told us what to do … we all know that Frank will tell you what to do,” Doria joked. “Frank does an exceptional job. He is a unique individual who is hard working and always involved, always willing to help, and always willing to go the extra mile. In working on so many elections and pieces of legislation together, Frank was never afraid to take a stand.”

Also speaking last night was former Governor Jim Florio, who commented that Robinson shepherded him through some mine fields in his early days in politics. He said that government “is most effective when you get people engaged and informed, and Frank has done all of that.”

After a video was shown of Robinson’s long career with accolades from public and private-sector leaders, the man of the evening took to the podium and humbly said that he did not deserve such honors, but he kindly thanked everyone in the room.

He commented that NJBIA and the New Jersey General Assembly were among the “three great” organizations he has worked for, the last one being the Robinson Family. Coming from a family of 10 siblings and 30-plus nieces and nephews, he considers his family an organization that has been “my foundation for my entire life.”

He honored his wife Mary Anne with a dozen roses for “putting up with me for 36 years,” and said that his mother, Mary, “was one of the brightest, happiest, funniest people I have ever met in my life. I can remember telling her: ‘Oh mom, that story you just told isn’t true.’ She would respond, ‘There is nothing wrong with embellishing a story.’ And God bless you mom … I’ve been doing that my entire career.”