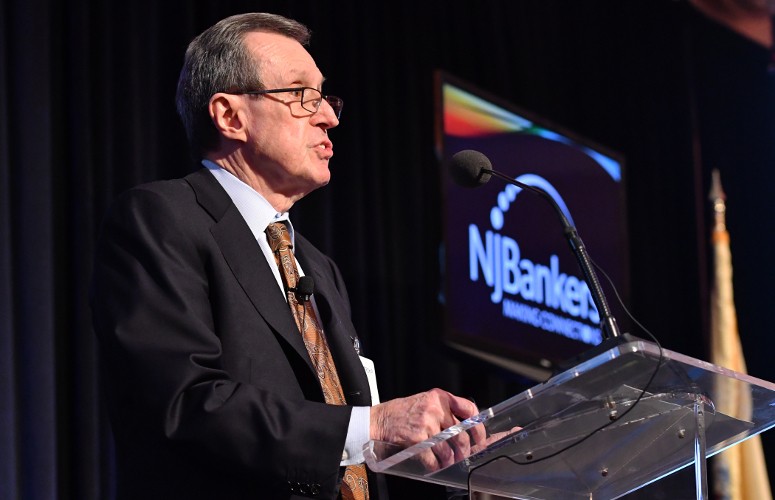 The Baltic Dry Index is a tool that can help experts evaluate the global economy’s health and how it functions, because the index essentially measures how full are cargo ships, and where they are headed. James W. Hughes, PhD, university professor dean emeritus, Edward J. Bloustein School of Planning and Public Policy at Rutgers University, seemed to use it as an analogy for New Jersey’s population outmigration problem at the recent NJBankers Economic Leadership Forum at the Palace at Somerset Park.

Hughes said the United States Census Bureau – which used IRS data – revealed there is a net outflow of approximately 1,000 people moving out of New Jersey each week compared to those who move in, resulting in 52,000 people annually leaving via internal United States migration.  The high cost of living in New Jersey is generally cited as one reason people leave.

Meanwhile, Hughes noted that from a total private-sector employment change (2010 to 2018), New Jersey had a 12.7 percent growth rate which – although it lagged the nation’s – ranked ahead of Pennsylvania and Connecticut.  However, it lagged behind New York (New York as a state is bolstered by New York City).  This is against the broader backdrop of a United States economic expansion that is 115 months in length, the second longest in the history of the nation.

“I think cyclically, we can conservatively say that New Jersey has been generally competitive with our neighboring states during this expansion,” Hughes said. On the basis of this performance data, he added that he has “officially updated his outlook to cautiously pessimistic.”

“There is a belief that innovation thrives in dense, interactive, multi-functional, creative environments, and it is actually stifled in insular one-dimensional suburban counties,” Hughes explained. Overall, New Jersey’s outer-edge counties saw population losses when millennials, in effect, moved into cities (however, some suburban areas did see an uptick in move-ins.)

Hughes explained, “We do not yet have our own superstar city, but, fortunately, we are in the gravitational orbit of New York.  And that is really the leading-focus superstar city. I think the force of New York’s economic gravity is helping to re-shape New Jersey.”

He also spoke about the transformation of office parks in the Garden State, and the need for industrial real estate distribution centers.

On the topic of outmigration, he later said, “Even though we have our problem with people moving out of state, I think we are making progress, and, fortunately, we are still in a period where the final chapter has yet to be written.  So, there is still hope, looking forward.”

Later at the conference, New Jersey State Senate President Stephen M. Sweeney sounded the alarm on the state’s pension and government-employee medical liabilities – as well as what he sees as the need for school consolidation – saying, “We are in an absolute fiscal crisis, at a level that people have no idea, and that’s why I am going around these rooms and talking to people. If we don’t change, by 2023, we are going to have a $4 billion deficit.”

Sweeney cited pension bonding as far back as 1997, which created liabilities for now and the future. He also said that school districts could be consolidated while simultaneously improving school quality. For example, he offered that regional high schools that have students arriving from smaller K-8 schools can ensure the curriculum is congruent, while at the same time reducing the aforementioned costs.

NJBankers Economic Forum is in its eighth year, and is generally non-political, with additional speeches by many others, including John C. Williams, president and CEO of the Federal Reserve Bank of New York.