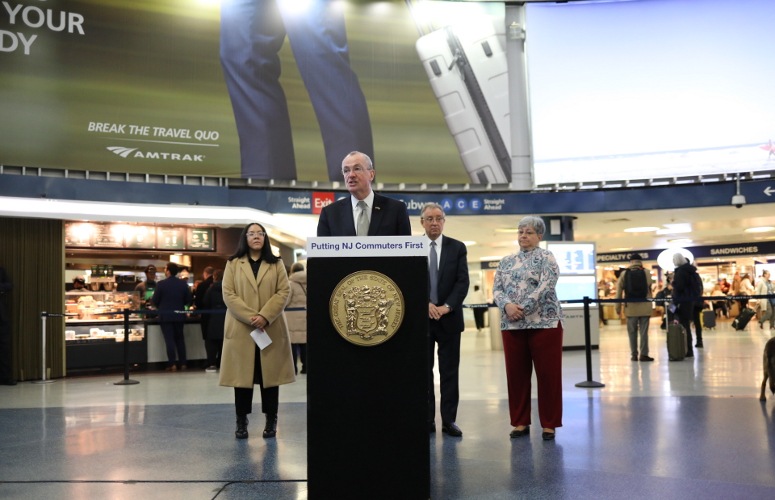 At a press conference held this morning at New York Penn Station, Gov. Phil Murphy and the heads of Amtrak and NJ TRANSIT announced the finalization of a financial settlement they said will pave the way for ongoing and future improvements to rail infrastructure, and customer service and safety.

Governor Murphy said he was proud to announce that NJ TRANSIT and Amtrak have reached an agreement fully resolving NJ TRANSIT’s outstanding prior payments owed to the national railroad company for the use of Penn Station and the Northeast Corridor rail line (approximately $189 million). “Now they are squared up and can move forward together in a stronger partnership,” he said.

The announcement is good news for thousands of commuters who have been plagued by canceled trains and delays for the past year.

Under the 2008 Passenger Rail Investment and Improvement Act, NJ TRANSIT was paying Amtrak approximately $7 million per month for the use and maintenance of its rail lines. Murphy blamed the administration of former Gov. Chris Christie for allowing the financial situation with NJ TRANSIT to deteriorate, calling it “shameful.”

The governor added that today’s announcement isn’t just about resolving NJ TRANSIT’s past payment issues. “We will begin working together to ensure a better day. All of the funds paid up will be reinvested to help our commuters and strengthen our rail infrastructure. That includes things like a new Portal Bridge once federal funding is secured,” he said.

“Investing in our infrastructure, improving customer experience, and enhancing the safety of the traveling public are among the highest priorities of our administration,” Murphy said. “The announcement today establishes a partnership that will achieve these goals now, and lays the financial foundation for continued improvements into the future.”

Amtrak and NJ TRANSIT have jointly agreed to reinvest all of the funds that came from this – and other – agreements into existing and future joint Northeast Corridor infrastructure projects that benefit both Amtrak and NJ TRANSIT, as well as the safety and travel experience of their customers.

According to NJ TRANSIT Executive Director Kevin Corbett, “In addition to continued infrastructure improvements and enhancing safety, this significant investment and strengthened partnership allows long-stalled major capital projects along the Northeast Corridor like County Yard and the Elizabeth Station Reconstruction project to advance. NJ TRANSIT will also have more input in the coordination and prioritization of these vital projects that will have a direct impact on improving the customer experience.”

“Thanks to Governor Murphy and NJ TRANSIT Executive Director Corbett’s leadership, partnership, and joint commitment to collaboration and the traveling public, the future is bright for Amtrak and NJ TRANSIT customers due to the power in partnership,” said Tony Coscia, Amtrak chairman of the board.