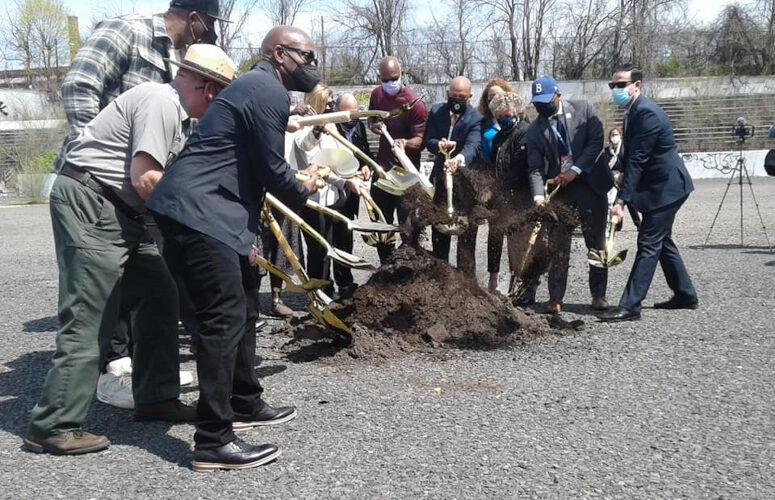 The rededication ceremony of Hinchliffe Stadium in March 2021. This past September, the New Jersey Jackals announced plans to make the stadium their home.
General Business

In an age when sports teams are fleeing from the city to the suburbs, the New Jersey Jackals are going in the opposite direction.

In recent years, Hinchliffe has fallen into disrepair, with weeds sprouting in the bleachers of the horseshoe-shaped seating bowl and cracked asphalt covering the diamond where Larry Doby and nearly a dozen other future Hall of Famers once played.

One of two surviving structures from the great Black leagues, which flourished before Jackie Robinson broke baseball’s color line with the 1947 Brooklyn Dodgers, Hinchliffe has been given new life – at a cost of $95 million.

Thanks to that funding from city, state and federal sources, the rusting relic is now undergoing a restoration that will reduce the original seating capacity from 10,000 to 7,800, but add dugouts, clubhouses, concession stands, lights for night games, press box and seating bowl improvements, a parking garage, museum, gift shop, residential housing, and a myriad of other amenities.

Asphalt covers the original surface, including the original diamond from Negro Leagues days, and will be replaced by artificial turf, giving a fresh green look to the once-drab edifice.

When finished, the oval-shaped facility is expected to be the glittering cornerstone of Paterson, the third-largest city in New Jersey but often the recipient of bad press resulting from inner-city issues involving crime, unemployment, and bad schools.

Built in 1932, Hinchliffe was originally owned by the city before the local school district took it over in 1963 as a venue for high school baseball. Twenty years later, temporary bleachers were replaced and artificial turf was added. But money for additional repairs vanished as the city diverted revenues for more serious problems.

Out of sight didn’t mean out of mind for the historic ballpark, however. Declared a National Historic Landmark in 2013, Hinchliffe – named for a former Paterson mayor – was the subject of a push by dedicated supporters who recognized its potential.

One of those supporters, Baye Adolfo-Wilson, became the chief developer of the new project, which current Mayor Andre Sayegh has called the most ambitious enterprise undertaken by the city since Alexander Hamilton harnessed the hydroelectric power of the nearby Great Falls.

The Jersey Jackals hope some of that power motivates the ballclub, which lost more than it won last year, but will be seeking its sixth championship in 26 seasons when it starts its 96-game Frontier League schedule. The first home game at Hinchliffe is scheduled for May 20, 2023, with the night scheduled to feature fireworks and other ceremonies marking the return of professional baseball to Paterson.

Jackals owner Al Dorso is bringing his team to familiar territory. “I was born and raised in Paterson and have many fond memories,” he said at the Sept. 14 press conference announcing the move. “I still know the town like the back of my hand. This is a great opportunity at the right time in my life to give back and add to the rich history of this region,” he said.

Dorso called the team’s transfer a “true ecosystem of opportunity” and pledged to work closely with the mayor, local officials, and business leaders.

Hall of Famer Larry Doby, a South Carolina native raised in Paterson, was among the stars who played at Hinchliffe before they reached the major leagues. He later became the first black player in the American League and the second to manage in the majors.

Larry Doby, Jr., was among the baseball celebrities who came to the initial announcement, scheduled for April 14 to match the uniform number his father wore.

Former big-leaguers CC Sabathia, Willie Randolph, and Harold Reynolds also participated in that event, turning over shovelfuls of dirt in a ceremonial groundbreaking.

Dorso said Hinchliffe will not only be home field for the Frontier League team, but will also be utilized for concerts, shows, holiday events and perhaps even an annual major-league game, such as the Field of Dreams game and Little League Classic.

Local leaders hope that Hinchliffe can do for Paterson what Camden Yards did for Baltimore: turn blight into beauty through baseball.

Along with Birmingham’s Rickwood Field, Hinchliffe is one of two ballparks remaining from the Negro Leagues, which gradually ceased operating after Jackie Robinson broke the baseball color barrier with the 1947 Brooklyn Dodgers.

The Jackals are one of 16 teams in the Frontier League, an independent circuit.