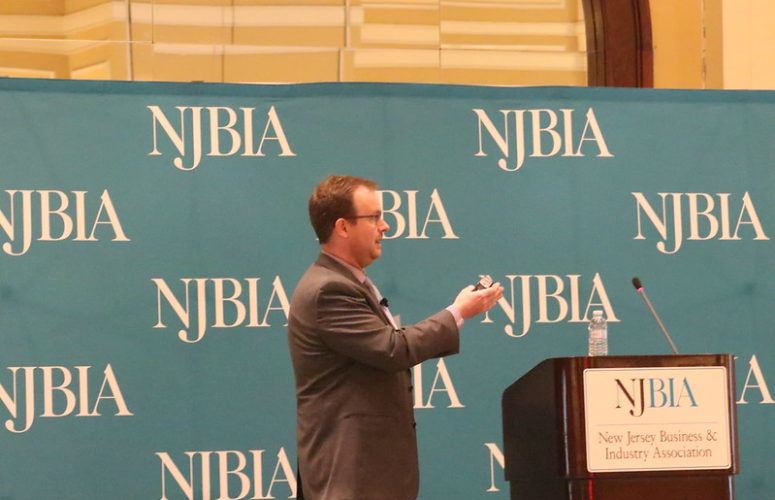 NJBIA’s 2019 Business Outlook Survey, which surveyed member businesses on a variety of issues, revealed that 55% of respondents feel a recession will happen in 2020 or 2021.

The survey revealed that the net outlook for the national economy is dramatically lower than a year ago, and that New Jersey’s economic outlook – while historically not a high-confidence zone – is actually the lowest it has been in a decade.

LaCerda said that above all else, the trade war with China is the biggest threat to the overall economy. Though even if a recession does hit, it would not be as severe as the Great Recession, for example.

While that may ease the minds of some, the concerning thing is that New Jersey’s lack of investment, expenditures and underfunded pension system do it no favors in the event of any sort of recession.

“The good news is that [based on Moody’s model] we don’t think we are headed for a recession,” LaCerda said. “But the bad news is that if it comes, it doesn’t seem like New Jersey is very well prepared.”

The Global Economy Is Slowing

With this backdrop of caution and trepidation from businesses in New Jersey, LaCerda pointed out that the global economy is indeed slowing. For example, he added that in Europe, Germany and the United Kingdom are both on the brink of a recession, with new regulations on the German auto industry and the uncertainty arising from the UK’s Brexit contributing to each country’s downturn.

In terms of the United States, whose GDP growth dipped from 3% a year ago to 2% currently, things actually aren’t in terrible shape relatively speaking, according to LaCerda.

“Relative to the rest of the globe, the US is doing pretty well as a whole,” LaCerda said. “More of the concern is the direction that things are going, like the deceleration with GDP growth.”

The good news is that the US labor market is still holding strong, maintaining record unemployment figures leading to confident consumers.

However, LaCerda points out that business confidence is much lower than that of consumers.

“It makes sense when you look at the numbers. The labor market is great, gas prices are still pretty low and the stock market is doing well – these are the things that tend to drive consumer confidence,” he said. “Businesses on the other hand are much more impacted by the trade war, which is contributing much more to the negative sentiment.”

Consumption by Income Percentile is Telling

The caveat when breaking down consumption numbers by income percentile, is that the top 10% of income earners are cutting back on their spending, LaCerda added.The middle class is powering consumption growth, while consumption is flat in the bottom 40% of income distribution.

“High income individuals are very sensitive to financial market conditions,” LaCerda said. “Consumption of higher earning individuals has become much more correlated with the stock market. The concern is that if there are bad developments on the global front that pull down stocks, higher income individuals will reduce consumption even further. This is significant because the top 10% of individuals contribute to 50% of the total consumption in the US.”

The flat consumption of the lowest income earners is also concerning because according to LaCerda, lower income households tend to be more sensitive to the business cycle, as many of these households do not have big savings buffers.

Without the help of trade, investment or added government stimuli, the weight to bear for the economy all comes down to consumers, LaCerda said.

“This is why the odds of a recession are healthy. The economy is essentially operating on one engine. If consumption growth falters, then the whole situation can start to unravel,” he said.

LaCerda said that the second half of 2020 is the critical turning point for the economy. According to Moody’s global macro economic model, at that point in time, GDP growth would be down to about 1%, which would mean things are getting dangerously close to stall speed.

“Once GDP growth dips below 2%, it creates slack in the economy, which causes unemployment to start to rise. Once unemployment starts to rise, some consumers will start to panic,” he said.

Finally, LaCerda said that the feds may cut interest rates one more time, possibly in the late first half of 2020, but after that, the economy would start to accelerate again in 2021 or 2022.

“The key thing is that there is no recession in our baseline forecast,” LaCerda said. “We get close, but we don’t go into a full blown recession.”

Manufacturers Encouraged to be Proactive in the Face of Workforce Challenges