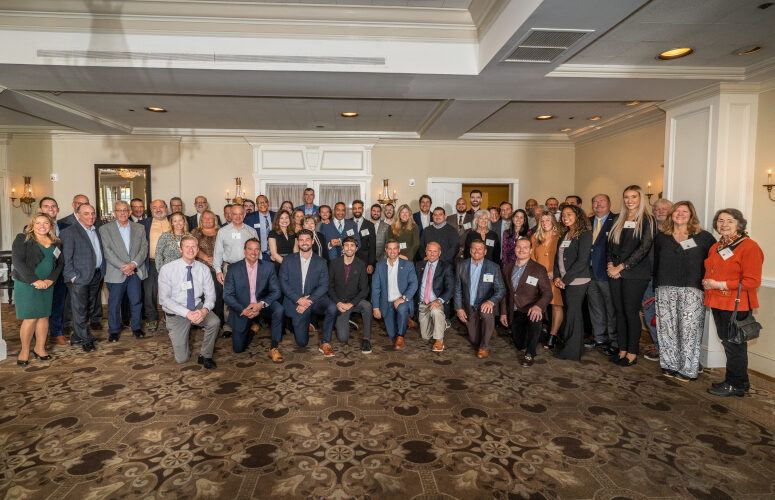 A group shot of the many family-operated businesses recognized this year by the Rothman Institute. Photo courtesy of Bill Blanchard Photography.
General Business

Some family businesses stand the test of time. For example, Italian-based Antinori wines has been continuously operating since 1385; that’s 19 generations. However, statistics show that many family businesses don’t enjoy the same longevity, failing to make it even the third generation. This is why, for the past 30 years, the Rothman Institute of Innovation and Entrepreneurship at Fairleigh Dickinson University (FDU) has been honoring family businesses, small and large, that have prevailed in terms of succession and business success.

Held recently at the Upper Montclair Country Club, the New Jersey Family Business Awards recognized 11 companies for their innovative strategies and business practices that have had a positive impact on the state and local economy as well as society in general.

Dennis Mikula Jr., president of Mikula Contracting and keynote speaker at the event, said he is part of the “dreaded third generation,” but he is now at the helm of the 76-year-old company based in Clifton.

Mikula discussed the importance of succession planning, as he told the audience how he lost his father and mother in late 2021 due to COVID-19. “My father was 66, and there was nothing I enjoyed more than going to work with him every day. He showed no signs of slowing down, but I told him we both have to be ready for when he steps aside. I wasn’t trying to push him out, but I wanted to know ‘What’s the plan?’”

He said that people always plan to talk about succession planning, but those conversations don’t usually happen because no one ever expects tragedies to occur, but “these conversations need to be had.”

Mikula said his drive to continue the family business was passed on to him from older generations, and that he is trying to pass that drive on to the next generation, as well company employees, who are considered family as well. “We wouldn’t be here without them,” he said.

Here are the profiles of the winners, finalists and semifinalists:

Sales of Under $10 Million

Sophie and Roman Shor were married in 1970 and arrived in the US in 1980 as immigrants from Belarus. It took them nine years to open their jewelry store in the US, which is based in Bridgewater. This happened with a loan of $100,000 and an amazing gift from a stranger they met at an annual jewelry trade show in New York who entrusted the couple with some of his finest pieces in order to get their inventory started and help them open their doors. This instilled in the Shors the value of paying it forward. They just “say yes” whenever a nonprofit poses a request.

For 50 years, Traphagen has served as a dynamic leader and provider of financial services. Founded by Peter Traphagen in 1970, the firm now employs three generations and six family members. Traphagen’s guiding principle is a personal commitment to provide business and individual success to each client to ensure their financial security; to achieve financial success for the firm; to provide professional and personal development for their associates; and to serve the community. The family crest, dating from the 1670s, was specifically chosen to be prominently displayed in front of the firm’s name. This symbol conveys integrity, fortitude and personal commitment.

This second-generation company, established in 1984 by Alberto Rivadeneira, an immigrant from Ecuador, is driven by the core values of integrity, accountability and commitment. Rivadeneira came to the US because he saw opportunity here. Today, Moonachie-based York Building Services, under the leadership of Rivadeneira’s son Robert, provides opportunities for its employees. Janitorial services are often an invisible workforce, but York works hard to keep its employees in the conversation with innovative training and communication apps, so messages are translated into employees’ home languages. The company also provides ESL and financial training to empower their employees.

Shovlin Mattress Factory of Fanwood is under the leadership of second-generation family member Ron Shovlin, along with his wife Kara and sons Grayson and Colby. The company prides itself on maintaining the family environment. One of the most important ideas Ron Shovlin has instilled in company employees is to “think like the owner.” The company is constantly watching the industry, but sticks to the traditional two-sided mattress, which gives it an edge over the competition. Shovlin has also developed new products using a combination of both old and new technologies, which is a major differentiator.

Union-based TeleCloud is a 40-year-old, second-generation cloud phone systems, family business. After putting in more than 10 years of sweat equity, siblings Damon, Vincent and Cara Miscia took over leadership roles in 2013 from their father, who founded the businesses. Hard work, integrity and gratitude are some of the family values incorporated into the business. As in their family, relationships matter, employees matter, and customers matter. The company’s moto is: Powered by the Cloud; Grounded by People.

Sales of Over $10 Million

Eastern Janitorial Company was founded in 1977 by Ron Rafanello. Ron married young, but his wife died unexpectedly. This changed his path. His situation attracted the attention of a local parish priest who asked him to serve as the school’s physical education teacher. The job didn’t pay much, so when he ultimately remarried and began a family, he became a janitor working at night to make ends meet. This led to the creation of Eastern Janitorial. Ron’s son, Nick, always wanted to work for the company, but his dad insisted that he graduate college. Now, under Nick’s strategic direction, the company has expanded into several divisions that are related to facilities care. The company’s success is the result of an unwavering focus on a simple guiding principle – find the best people, then train and support them with the latest industry tools.

For more than 75 years, Alfred Sanzari Enterprises (ASE) has been one of New Jersey’s most respected and successful office, residential, industrial and hospitality developers and property managers. Born and raised in Hackensack, company founder Alfred Sanzari was keenly focused on building a company that could provide his family for generations to come with the financial stability he lacked throughout his childhood. Now in its third generation of family leadership, the company’s success can be traced directly to its namesake. Sanzari has consistently adhered to a unique legacy ownership strategy that has enabled the firm to retain ownership of more than 90% of developed assets. The firm knows that any building it acquires or develops must span generations. The properties within its portfolio have become synonymous with quality construction, timeless design, and meticulous management.

The three Postorino brothers comprise the second generation of owners of this Parlin-based environmental service contracting business. Each brother is an equal contributor. They

credit their father/founder, Mario Postorino for defining their responsibilities by personality and skill set. The Postorino family has imparted an extended family feel in the company. There is a mutual respect among all employees and everyone’s job is viewed as critical. The strong family values are woven throughout the fabric of the company – honesty, integrity and supportive motivation. It is important for AWT employees to feel respected, secure and have opportunities for growth. This AWT “special sauce” has enabled this second generation of brothers to grow the company financially and to grow from a family of 12 employees to 53 employees.

The Block family boasts three generations in the staffing industry. Monte and Linda, second generation owners and co-CEO’s of East Brunswick-based Equiliem, proudly work with their three children: Bradley, Jourdan and Shannon. People first, values-minded and family run: That is how Equiliem operates. The company delivers synergy, scalability and dynamic hiring outcomes to supercharge the success of their clients’ businesses and their candidates’ careers. Equiliem focuses on creating inclusive work environments for its employees and a flexible workforce. Practicing diversity of thought allows individuals to be seen and offers opportunities to underserved and underrepresented groups. The commitment is to help people find jobs – to empower their lives.

Ed Walters founded the Walters Group in 1984 and now runs the Barnegat-based, two family-owned business with partner Joe DelDuca and their sons.

Walters Group custom home division aims to streamline the homebuilding experience by creating an easier and more cost-efficient process for buying land and designing and building custom single-family homes. The company has also emerged as a leader in the field of affordable housing in New Jersey.

Family-focused values play an important role in the success of the Walters Group. At all levels, employees are dedicated, enthusiastic and talented people who work together toward mutual goals. The staff is encouraged to be proactive, whether it’s within their job or coordinating and participating in charitable endeavors. It always goes back to the company’s core value simply – Do the Right Thing!

Francisco Vizcaino-Marmol, along with his wife, son, nephew and niece, started F&S Digital in 2019 after closing his growing business in the Dominican Republic and immigrating to the US with his family, 13 years ago. While living in the Dominican Republic, Vizcaino-Marmol developed a software for school administrations, which was used by 10 schools. In the US, he always dreamed of creating another business. When his oldest son, also named Francisco, received his Computer Science degree, the family finally pursued their entrepreneurial dream. It started Ventnor-based F&S Digital, a company centered around creating and supporting custom-built websites, web apps, and mobile apps for businesses of all sizes. The core service ensures that no organization/entrepreneur is ever limited by their technical knowledge, or their team’s bandwidth to adopt cutting-edge technology.