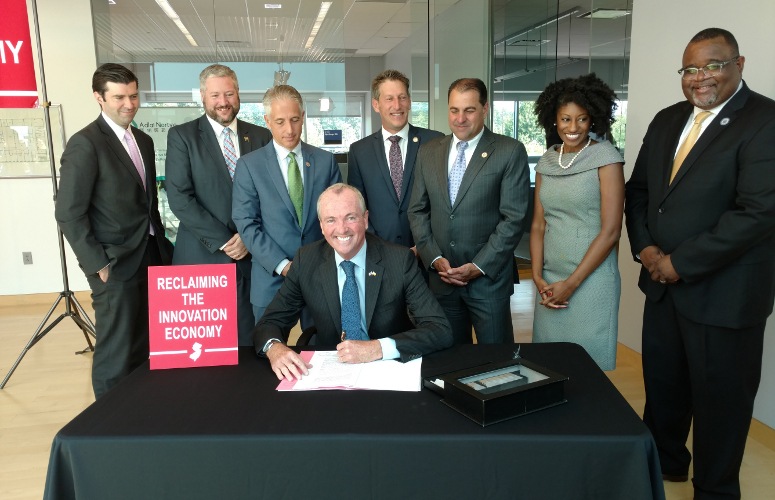 A state commission that once spearheaded the creation of academic high-tech centers and spurred collaboration between the state’s institutions of higher education and private industry was reborn today with the signing of Assembly Bill 3652 by Gov. Phil Murphy.

The New Jersey Commission on Science, Innovation and Technology, formerly known as the New Jersey Commission on Science and Technology, “will promote the state as a home for academic and technological research and development and commercialization,” the governor said at this morning’s signing held at the Biotechnology Development Center (BDC) in North Brunswick.

He added, “New Jersey is getting back to its core mission of being a cutting-edge home for research and innovation that improves and saves lives, creates good jobs and changes our world for the better.”

The former science and technology commission was defunded in 2010 and during those eight years, “New Jersey’s reputation as a hub for technology and innovation languished,” the governor said.

The announcement was coupled with the formal debut of ResearchwithNJ.com, a free portal that showcases the state’s expertise in science, technology, engineering and mathematics (STEM), including the professional profiles of some 3,500 academic researchers from five research universities in the state.

Michele Siekerka, New Jersey Business & Industry Association (NJBIA) president and CEO, said the association “commends the governor and the sponsors of this legislation as it is designed to attract science, innovation and technology related businesses to New Jersey.”

The commission will be comprised of 17 members, including the Secretary of Higher Education, the Commissioner of Education, and the CEO of the New Jersey Economic Development Authority (EDA).

It will also appoint an Innovation Council from its membership. According to Siekerka, “The commission, charged with appointing an “Innovation Council,” will help resolve ways to leverage the transfer of technology research between academia and industry, which is particularly fitting on a day that also sees the formal launch of the ResearchwithNJ.com online portal.”

NJBIA played a role in ResearchwithNJ.com’s genesis, as the concept of the portal evolved from a 2010 report from then NJBIA affiliate, NJPRO Foundation.

James Barrood, president and CEO of the New Jersey Technology Council, commented that both “ResearchWithNJ.com and the new commission will strengthen the ties between academia and industry, and demonstrate that New Jersey’s government is all in regarding growing the innovation economy. This state has the potential to lead the nation in creating the technological breakthroughs of the next generation … developing the products and services that will change our world.”

Dr. Don Sebastian, president & CEO of the New Jersey Innovation Institute and senior vice president of technology and business development at NJIT, said the importance of the commission is that “it represents the important glue between the private sector and universities. If you really want these collaborations to work, you need the thumb of government input on the scale. The former commission enabled the universities to create the research infrastructure. You would never have been able to do this with typical university grant funding.

Senator Paul Sarlo added, “Growing the innovative economy is a great way of working our way out of budgetary legacy problems in the state by bringing in talented people and growing entrepreneurial companies. New Jersey needs to be not just a leader in the northeastern U.S., but throughout the country. It finally looks like we have a governor who believes in investing in the innovation economy.”