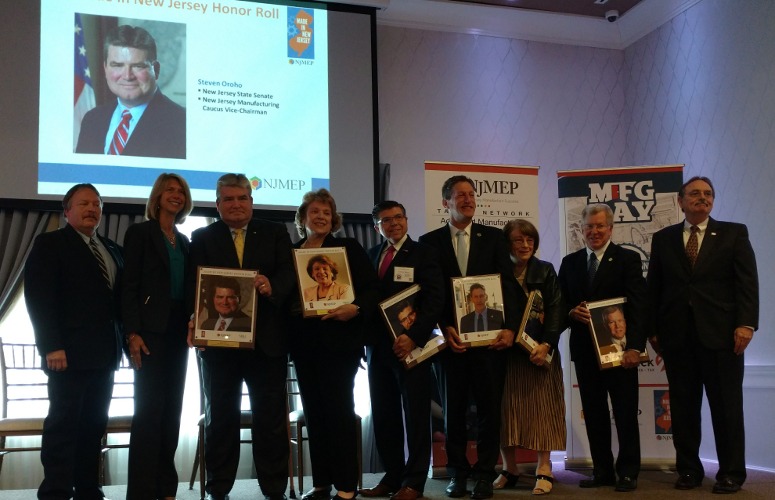 Presenters and recipients of the Honor Roll for Manufacturing and STEM at today's NJMEP Manufacturing Day Celebration.
General Business

By Editors Anthony Birritteri and George N. Saliba On Oct 5, 2018

In celebration of the nation’s seventh annual National Manufacturing Day, approximately 400 people, including leaders in government, academia and business, gathered at The Marigold conference center in Somerset, to honor leading companies and individuals who help make manufacturing a $44.52-billion industry that employs 240,500 workers in the state (traditional manufacturing jobs only) and represents 8 percent of state GDP.

The awards and daylong event – complete with breakout sessions – was hosted by the New Jersey Manufacturing Extension Program (NJMEP).

In opening comments, John Kennedy, CEO of the organization, discussed the total economic impact of the industry, saying that if life sciences, STEM/technology and transportation, logistics & distribution firms were considered in the statistics mentioned above, the industry’s real economic impact would be between $60 billion and $100 billion. “That is 1.1-million people who are working in these industries. It is critical for us that they continue to not only exist, but thrive in New Jersey,” Kennedy said.

He commented that over the last 18 years, NJMEP has helped manufacturers realize more than $3.8 billion worth of value, and that the organization, part of a national MEP network, is the top ranked in the country.  “The biggest thing to me is that 33,000 jobs were saved or added because of the work we do,” he said. “This year, we are on pace to (create/save) 4,000 jobs. We have never seen this before and are proud we are able to do this.”

Governor Phil Murphy, via prerecorded video,  said that the support of manufacturing is a key component of his administration’s goal in building a stronger and fairer economy. “Last year, the manufacturing sector represented 8 percent of state’s economic output,” Gov. Murphy said. “If we work together, we can do more and build more.”

As a business leader and US ambassador in Germany, Murphy said he saw firsthand how manufacturing can grow a strong middle class and drive innovation. “There is no reason we can’t (create) that success here in New Jersey,” he said. “As governor, I will make sure you can access a skilled workforce and that your concerns are heard clearly across our administration.”

Michele Siekerka, president and CEO of the New Jersey Business & Industry Association (NJBIA), spoke to the audience regarding the problem the industry is having in finding and hiring qualified workers.

“All across this great country, you and your colleagues are celebrating National Manufacturing Day,” Siekerka told the crowd. “At the same time, the issues we face here in New Jersey are also faced across the nation. One, in particular, is how do we build a pipeline of workers?” Taking a poll via a show of hands in the room, half of the crowd revealed they had vacant positions at their companies. “This is what I hear everyday,” Siekerka commented.  “It is incumbent on us to fill that job pipeline.”

She said the work of NJBIA’s Post Secondary Education Taskforce is focused on building the pipeline of skilled workers. With 13 taskforce recommendations, Siekerka said, “We know we have vacant jobs in New Jersey that can afford the next generation of workers. … We are going to fill those jobs.”

Siekerka helped present this year’s Honor Roll for Manufacturing and STEM, given to people who have distinguished themselves for helping build a strong manufacturing environment and are passionate about the industry. They include: New Jersey Assemblymen Andrew Zwicker and Anthony Bucco, Jr.; Board of Public Utilities Commissioner Robert Gordon; Melanie Willoughby, executive director of the New Jersey Business Action Center; Senator Steven Oroho; and Gale Tenen Spak, associate vice president for continuing and distance education, New Jersey Institute of Technology.

Tim Sullivan, CEO of the New Jersey Economic Development Authority (EDA), was the keynote speaker at the day’s event. Talking about Gov. Phil Murphy’s recent economic development strategy, which was introduced this past Monday, Sullivan said “first and foremost, the governor is making the case for a stronger and fairer economy where we can do good  – and do well – at the same time. We can pursue things that make New Jersey a better place to work and live while making it a better, stronger place to build a business.”

The governor’s plan, he said, starts with investing in people via workforce development, training and apprenticeship programs. … “It’s all on how we build the next generation of talent and also help those people within the (manufacturing) industry to transition into new jobs and skills so that they are ready for the 21st century economy.”

While providing incentives to industries, including manufacturing, are important, Sullivan also stressed other ways of helping businesses.  “We also want to do more things like the Manufacturing Policy Academy (announced in late August of this year) where we are part of a team that is supporting manufacturing via collaborations between government, the private sector and academia in developing policies and initiatives dedicated to making the cluster stronger – that invests in the talent and infrastructure required. This is how we think there will be sustainable and durable economic growth that creates good jobs,” he said.

Sullivan also commented that the EDA will be doing more to help small businesses via a new small business lending office. He said more details on this venture will be provided in the coming weeks.

Among the various roundtables held throughout the day, was one dealing with red tape and the laws and regulations that affect all businesses, especially manufacturers. During this particular event, audience member Melanie Willoughby, executive director of the New Jersey Business Action Center, was asked from where regulations originate.

She responded, “This is always part of my speech when I talk to businesspeople across the state: the Legislature creates the laws, the governor signs them into effect, and then the government is responsible for passing regulations. Then, due process happens, and then the normal population doesn’t even know about [the regulations].  But, [nothing is] repealed, so it is like layer, upon layer, upon layer of laws, and then more regulations – and there is no coordination between all of them. It creates a lot of inconsistencies and all the things that go on in all the departments.”

Senator Steven Oroho stressed, “The regulations can come through the Legislature that creates a law, but they can also come right through a department and never come before the Legislature – that is what a lot of people don’t realize.” He cited the recent regulations that were to impact the state’s microbreweries as an example of this (the regulations were changed following a widespread outcry).

In very broad terms, Assemblyman Anthony Bucco, Jr. said, “I would encourage all of you to reach out to your legislator, if you have a problem. We are more than just about bills in Trenton. We can talk to various department heads, and we can call the DEP and they answer the phone, a lot more easily than sometimes you can [on your own].

“It shouldn’t be that way; you should have just as much access as we do. But, the fact of the matter is that is not the way it works.”

The luncheon portion of today’s event revealed the winners of NJMEP’s New Jersey Manufacturing. Below is a complete list of those honored:

Innovator of the Year

Manufacturer of the Year; young/startup (in business five years or fewer)

Winner: Designs by Kait and Mike

Manufacturer of the Year; large (251 employees or more)

Manufacturer of the Year; medium (51-250 employees)

Manufacturer of the Year; small (50 or less employees)