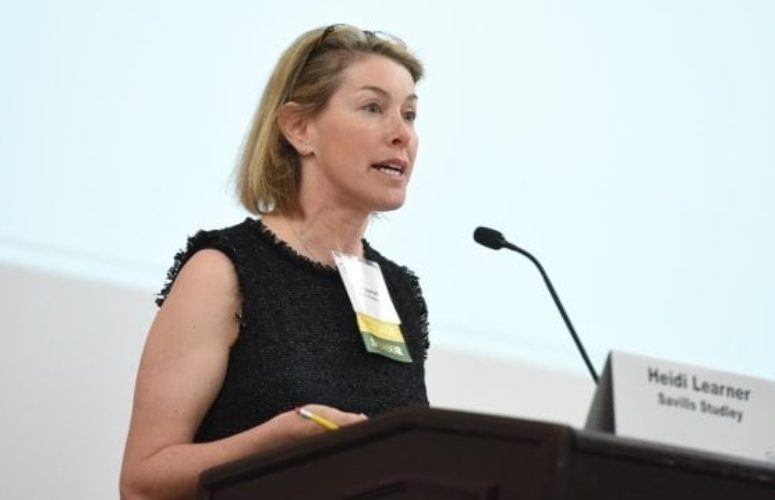 If real estate is about “location,” at 26 square miles, Newark is a large municipality minutes from Manhattan, replete with attributes ranging from a massive seaport and airport, to a node of corporate headquarters and esteemed universities – to an ever-improving business district and a growing multi-family market.  And while the city may continue to wrestle with certain issues (as any metropolis arguably does) there is much to celebrate in the commercial real estate sector, the latter a focus of yesterday’s 13-speaker Newark Regional Business Partnership event held at the Robert Treat Hotel, titled, “Newark’s Stock is Rising.”

If there was one refrain throughout the two-hour event – and it was phrased slightly differently by various participants – it might be summarized in the closing remarks of Aisha Glover, president and CEO of Newark Community Economic Development Corporation.  Referring to the much-publicized fact that Newark is on the cities short list for Amazon’s second headquarters, Glover said, “Whether or not Amazon comes, Newark is in a better place. Even if we attract the next Amazon, we are still ahead of the game. Thinking about the initiatives of the foundation and the infrastructure, literally and figuratively, that we have a place to support an Amazon – or whomever – is really about hiring locally, buying locally, and incentivizing staff to live here.”

And while Amazon examines Newark overall, if one explores the city through the lens of commercial real estate, its industrial sector (warehouses, distribution centers, etc.) is faring particularly well, with single-digit vacancy rates. Heidi Learner, chief economist at Savills Studley, told the event’s audience, “There really is a clear demand for industrial space in and around Newark, and, largely, that is a location issue. In terms of connectivity to the New York metro region – one of the biggest population centers on the East Coast – that is going to continue to be a driver of industrial demand, for Newark.”

The seaport’s container shipments are increasing, and will likely continue to do so following the raising of the Bayonne Bridge, which has recently permitted massive Post Panamax vessels – huge container ships constructed following the expansion of the Panama Canal – to call on the port. Additionally, port capacity is expanding via bond funding, and e-commerce is a fire that fuels shipments from around the world, to the port.  Cargo at Newark’s airport has likewise increased, and FedEx has committed to maintaining its Newark Airport hub through the year 2030.

Learner added, “We don’t think about this when we think about large warehouses, but there really is growing need for goods that can be refrigerated and/or frozen, and that’s one of the types of warehouse facilities that New Jersey and Newark, in particular, goes a long way toward offering. I think all of these things will help boost the industrial picture.”

Much fanfare surrounds Broadridge Financial’s move to Newark, although, overall, the office market has not been too strong, with many of the deals that do occur taking place only in select buildings, against the backdrop of an older building stock, of which the average age is 66 years.  Learner underscored that the office market’s level of existing vacancy is “quite high” – at approximately 20 percent during the last few years – and that vacancy has started to increase.

She said, “That is certainly not the direction that we want to see.  Net absorption has been flat or negative.  The amount of space left behind is equal – or, in some cases, greater – than the amount of space that is being taken.”

There has been a boon in Newark multi-family construction and in retail, including, for example, the Hahne’s building, which was a yesteryear department store of the same name, but now is a mixed-used development featuring such diverse elements as a Whole Foods grocery store, apartment units and use by Rutgers University.  One Theater Square is yet another example of a development in this sphere; it is slated to open with 245 market-rate units this summer.

While there are naysayers who may highlight Newark’s higher city unemployment rate, debt levels, and pension concerns, Moody’s did upgrade the city’s outlook.  Overall, some might argue that it is not where a city was, or even where it is that matters – what is important is where it wants to go.  Learner, describing Moody’s, said that “the crux of Newark’s story, going forward, is an ongoing redevelopment that will eventually lead to a material expansion of the tax base.”

Recapitulating the Amazon possibility, Learner said, “I would highlight that even if Amazon doesn’t pick Newark – and I think they should – but, even if they don’t, it is still really a reflection of Newark’s strength and progress over the past few years. No matter what happens, Newark has a lot to offer.

“It has: the tech talent; I mentioned NJIT and Rutgers. It certainly has the internet speed and the connectivity; we are seeing a rebound in growth, in multi-family housing; and Newark’s high education certainly goes without saying.

“Between the culture and [New Jersey Performing Arts Center], and The Prudential Center, and the access to transit, Newark has a lot to offer. Certainly for Amazon, but for many other employers as well.  This will all be part of Newark’s story, going forward.”

Also at the event, speaking in broader terms, Tim Sullivan, chief executive officer of the New Jersey Economic Development Authority (NJEDA), reminded the audience, in part, “[Amazon] put out an RFP that said, basically, ‘We want a big, thriving city.  That’s where we want to be.’  Newark has done great in that competition so far – [Amazon] wants: walkability, they want density, they want mixed-income housing – they don’t want to be in a different kind of setting … No one asked them to write that; that is what they want – one of the largest, most successful companies in the world, and that’s what they want. I have seen that increasingly with corporate location decisions all throughout country.”