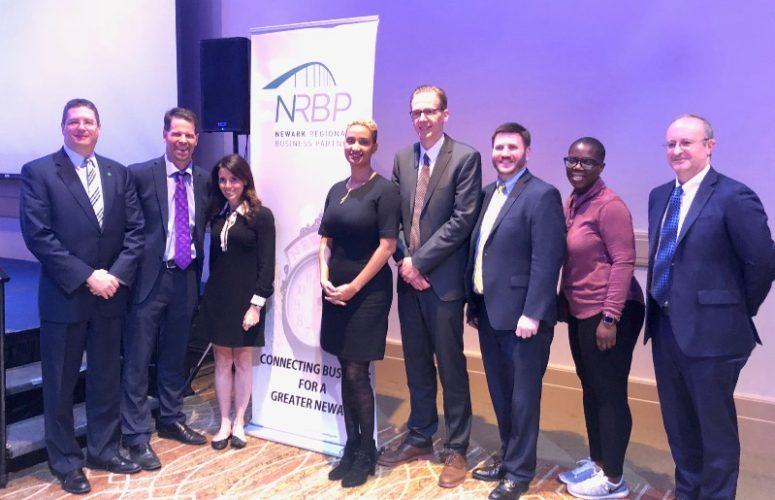 Newark Looking to Capitalize on its Positive Economic Momentum

The Newark Regional Business Partnership (NRBP) hosted its Regional Economic Outlook today at the Robert Treat Hotel in Newark. Attendees were given a glimpse into the economic opportunity and development in Newark – a city that has been enjoying positive momentum with an influx of new businesses, future expansion plans like that of Mars Wrigley Confectionery and community redevelopment efforts over the past several years.

Brian Sabina, senior vice president, economic transformation, New Jersey Economic Development Authority (EDA), and Alexander Heil, chief economist, Port Authority of New York and New Jersey, both shared their perspectives on the status of the greater region’s economy, as well as what could be done to continue to spur growth in New Jersey.

Sabina pointed out New Jersey’s key assets that contribute to its competitive advantage such as its educated workforce, institutions of higher education, transportation infrastructure, and location – all of which are highly desirable to businesses considering moving into the state.

“When we take a look ahead, it certainly can be full-steam-ahead for the economy. It’s really just a matter of taking the right approach to leverage [the state’s] best assets,” he said. “When we invest in the right talent, workforce and our communities, it helps increase our value proposition to attract and retain great companies.”

Sabina highlighted the state’s key initiatives for spurring such economic growth, which include Gov. Phil Murphy’s goal to add 300,000 jobs and attract $625 million in venture capital investments by 2025, investing in a diverse innovation ecosystem, closing racial and gender wage and employment gaps, and investing in the state’s cities – like Newark – to help them thrive.

“Coming out of the recession, we’ve seen tremendous job growth in New York City and the surrounding area,” Heil said. “We’ve seen lagging employment growth in New Jersey counties; however, the overall mix of industries that has benefitted is the same. [Some examples] include leisure and hospitality, professional and business services, education, healthcare and retail. The expectation currently is this [growth] is going to continue.”

As for a potential slowdown in economic activity, Heil does see that possibility at some point in the future.

“We are at the point nationally where we have a very well performing economy on paper,” Heil said. “I think once some of the fiscal support diminishes over the next year- and-a-half or so, we are going to see a weakening of the economy, not necessarily to the point of a recession, but there will be a noticeable slowdown of economic activity.”

Newark itself has seen revitalization from an economic standpoint, and initiatives such as the “Newark 2020” jobs program, which aims to find full-time employment for 2,020 residents by 2020, continue to showcase the efforts being done.

Additionally, Newark’s consideration for Amazon’s second headquarters (HQ2) has been a huge boon for the city, garnering national recognition.

“The quest to raise our national visibility has been very purposeful over the last three years,” said Aisha Glover, former president and CEO, Newark Community Economic Development Corporation, and the new CEO of Newark Alliance. “The fact that we decided to go after Amazon HQ2 was not just so we could get access to 50,000 jobs. There was also the possibility of thinking of those 70,000 to 110,000 indirect jobs, which are more accessible than some of the corporate jobs that would come with HQ2.

“The other big reason was for marketing and branding,” Glover continued. “Nobody expected Newark to end up on [Amazon’s] list – except for Newark. That catapulted us into a national discussion which was very vocal and very strategic, but we are not hungry to keep thinking about what else we can do nationally. …We are focused on Newark locally. We want to be a national model for equity and the only way we are going to do that is to be purposeful and intentional locally.”

Dayo Adiatu, community manager, Launch Pad Network, said it is important for Newark to capitalize on its current momentum. “I’d like to make sure that this energy and momentum doesn’t just wither away, but instead we are strategic about how we channel it so that we are having the greatest economic impact on the city.”