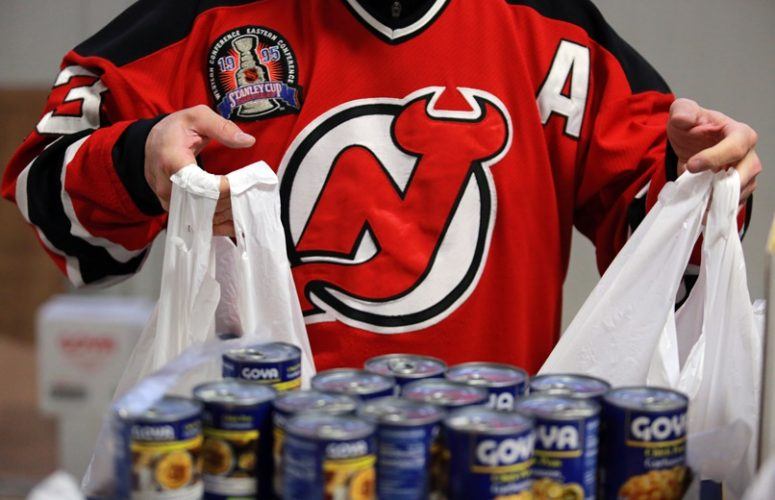 New Jersey Devils Provide 70,000 Pounds of Food to Those in Need

Each season the New Jersey Devils host an annual food drive, in partnership with Goya, where all fans and employees are encouraged to participate in giving back to those in need. Goya, based in Secaucus and the largest Hispanic food company owned in the United States, agreed to match up to 40,000 pounds of food collected through the Devils’ drives, which has been donated to the Community FoodBank of New Jersey.

Beyond the success of the annual drive, the Devils’ have formed a partnership with Transfernation, a food rescue service that collects cooked and unserved food, that is then distributed to organizations that serve homeless, low-income individuals and others in need, making Prudential Center the first arena to partner with the organization. Through Transfernation’s services, the New Jersey Devils and Prudential Center have already donated more than 1,881 pounds of food.

Exceeding last season’s collection numbers, this year’s food drive presented by Goya has directly affected thousands of local community members in need. All donations were given directly to the Community FoodBank of New Jersey, the largest anti-hunger and anti-poverty organization in New Jersey that began more than 40 years ago in downtown Newark. Later this year, as part of their annual Day of Service, Goya, New Jersey Devils, and Prudential Center employees, along with Devils Alumni members, will volunteer their time to sort and pack a portion of the 40,000-pound donation at the Community FoodBank of New Jersey. The bagged meals will then be distributed to Newark families in need.

In addition to the food drives, the Devils donated more than 1,881 pounds of food, which equates to 1,568 meals over the course of seven Devils home games, throughout October and November, thanks to their new partnership with Transfernation. Transfernation’s idea began in a New York University dorm room between two college juniors, Hannah Dehradunwala and Samir Goel, who were stunned by the amount of excess food being discarded after campus events. What started as an on-campus movement has expanded to 28 contractors and 16 community organizations throughout the tri-state area.

Transfernation began collecting cooked and unserved food from all New Jersey Devils home games on October 11. Legends, Prudential Center’s official hospitality partner, prepares and executes the donation to Transfernation which then gets distributed among the various beneficiaries. The beneficiaries selected for 2018-19 season include Integrity House, Catholic Charities of the Archdioceses of Newark, St. John’s Soup Kitchen and Goodwill Rescue Mission/The Bowery Mission.

“This is the time of year as an organization, we really ask ourselves what more can we do to help benefit our local communities?” said Jeff Scott, vice president of community investment and grassroots for the New Jersey Devils. “To be able to have incredible partners such as Transfernation and Goya, who share our passion for servicing those in need, truly allows us to elevate our efforts in making a difference in the communities where we live, work, and play. As an organization, that is something we are very proud of.”