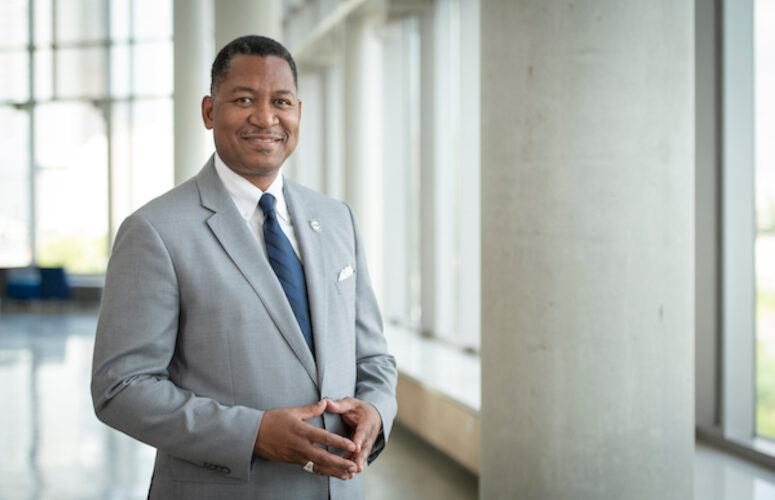 “Antonio Tillis is a brilliant scholar and gifted administrator whose commitment to the transformative power of higher education presents an exceptional opportunity for both Rutgers and New Jersey. We are proud that he will lead Rutgers University-Camden,” Holloway said.

“Rutgers is deeply invested in bringing opportunity and growth to Camden. Antonio Tillis will be a driving force in helping Rutgers University and the City of Camden reach new heights,” Holloway added.

Tillis, 55, will lead Rutgers University-Camden, the southernmost campus of Rutgers, The State University of New Jersey, with more than 7,200 undergraduate and graduate students enrolled in 39 undergraduate and 29 graduate programs. Nationally recognized for its commitment to access for first-generation students, as well as its innovative civic engagement programs, Rutgers-Camden recently achieved status as a Carnegie National R2 Research University.

Tillis recently served as interim president of the University of Houston–Downtown, a comprehensive urban institution offering more than 50 degree-granting programs and serving more than 15,000 students. In this capacity, he worked collaboratively to promote student and faculty development, engage the community, and advance the strategic vision for the second-largest campus in the University of Houston system.

Also at the University of Houston, he served as dean of the College of Liberal Arts and Social Sciences, the largest of the 15 academic and professional colleges at the university. Under his leadership, the reputation and resources of that school grew significantly. He successfully led a $60 million fundraising campaign while developing new opportunities for student learning experiences and creating partnerships with community organizations in the city and throughout the region. He increased student scholarships, recruited and retained nationally known faculty, created an infrastructure to nurture the research profile of the school and greatly expanded outreach to the city by launching such programs as the Dean’s Mayoral Summer Internship and a mobile unit to deliver social and health-related services in the community.

In 2017, the University of Houston named Tillis as the M.D. Anderson Professor in Hispanic Studies. He is fluent in Spanish and Portuguese.

Tillis previously served as dean of the School of Languages, Culture, and World Affairs at the College of Charleston in South Carolina, where he instituted numerous initiatives, including the Wells Fargo International Scholarship for Study Abroad for low-income, in-state students; the Dean’s Collaborative Interdisciplinary Summer Research Award for International Engagement; and the Summer International Internships for students in India, Brazil and Ghana.

Tillis additionally chaired the Department of African and African American Studies at Dartmouth College and served as the inaugural director of the Latin American and Latino Studies Program at Purdue University, where he received the 2007 Faculty Scholar Award.

Houston Mayor Sylvester Turner declared March 7, 2017 as “Dr. Antonio D. Tillis Day.” In 2018, Tillis was selected as one of 30 national participants for the Joint Civilian Orientation Conference hosted by the U.S. Secretary of Defense.

In 2009, he received a Fulbright Fellowship to Brazil. He has presented his scholarship at lectures and conferences across the United States and around the world.

“It is an honor to be given the opportunity to lead an institution as engaged, diverse, and student-centered as Rutgers University-Camden,” he said. “This is an outstanding university that clearly demonstrates its commitment to public values and to building upon its tradition as a place of access for first-generation college students seeking a world-class Rutgers degree, and the opportunities that come with that degree.

“I am a first-generation college student. I understand what drives Rutgers-Camden students. It’s not just about them – their success also is about the elevation of their families and their communities,” he said. “I look forward to working with these students to help them take full advantage of the opportunities before them and to make sure that they are supported.”

“It is especially important that Rutgers-Camden students learn with, and are mentored by, a truly impressive faculty who consistently are at the vanguard of generating new ideas to improve our society,” added Tillis. “I am very excited to work with the academic enterprise to cultivate the support it needs to thrive as a research institution, which will provide our students with unparalleled learning opportunity while firmly defining both Camden and southern New Jersey as a nexus for innovation.”

“I am very excited to welcome Dr. Antonio Tillis to the Rutgers-Camden community,” said Frank Hundley, chair of the Rutgers University–Camden board of directors and a member of the Rutgers University Board of Governors. “Dr. Tillis is a scholar who brings a wealth of knowledge, talent, and excitement to our campus and will take Rutgers’ presence in South Jersey and the Philadelphia region to unprecedented heights.”

Tillis has served on numerous boards, including Houston Habitat for Humanity, the Houston Arts Alliance, the International African American Museum in Charleston and the Hemispheric Institute for Performance Studies. He is a founding board member of the International Institute of Critical Pedagogy and Transformative Leadership.

He enjoys performing as a lyric baritone and collecting contemporary art from West Africa, Cuba, Brazil and the United States.

J.G. Petrucci Breaks Ground on Over 2M Square Feet Across PA and NJ