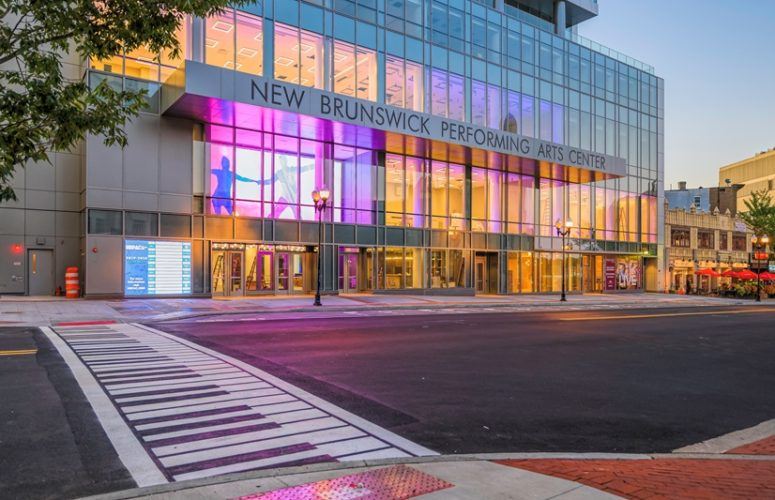 The City of New Brunswick celebrated the grand opening of the $172-million New Brunswick Performing Arts Center (NBPAC) with a ribbon cutting ceremony this morning and special event last night in which more than 450 guests saw performances by the center’s four resident arts groups. Perhaps more importantly, many of the project’s 19 public- and private-sector partners were on hand to praise the completion of the two-year project and the impact it will have on New Brunswick and the rest of the state.

These groups will take advantage of five rehearsal spaces and two state of the art theaters: the 463-seat Elizabeth Ross Johnson Theater and the 252-seat Arthur Laurents Theater. Arts organizations and other groups can also take advantage of 30,000 square feet of office space above the theater complex.

The 23-story, 450,000-square-foot project also includes 207 residential apartments, 20 percent of which are affordable units thanks to a partnership between NBPAC and The Actors Fund that will market these units to graphic artists, actors, musicians, dancers and theater support personnel. The units in the apartment tower (19 stories) is owned and managed by Pennrose Properties. There is also a 344-space public parking garage at the site to accommodate residents, staff and theater goers.

George Zoffinger, chairman of DEVCO, told New Jersey Business that the project will have an annual economic impact of $25 million for New Brunswick. “The center is going to bring artists from New York and all over the country because of the quality and size of the theaters. We built state-of-the-art medium-sized theaters that provide flexibility in terms of what kinds of performances can be scheduled.”

In his comments to the audience later in the evening, Zoffinger commented, “Real dreams are going to take place in this facility and it is due to the support of the community.” He added that the “dream” for the complex began more than 10 years ago, “and some would argue more than 25 years ago.”

DEVCO President Christopher Paladino said, “This building symbolizes the next step in the revitalization of New Brunswick, further distinguishing it as one of America’s great cities.” He said last night’s event was all about the arts, community, partnerships and leadership, as he honored political leaders such as Senate President Steve Sweeney, Senator Bob Smith, Assemblyman Joseph Egan and others.

Sweeney commented that New Brunswick is now “the envy of the state. You don’t realize what this project is going to do for this region. Everything is going to happen here,” he said, adding that restaurant businesses will boom as well as business at The Heldrich Hotel across the street from NBPAC. Sweeney also praised New Brunswick Mayor Jim Cahill for his vision and years of leadership.

In his words to the audience, Cahill said, “It is no coincidence that the resurgence of New Brunswick runs parallel with the resurgence of our arts community. The arts have been a transformative force, serving as an economic engine that fuels the heart and soul of our community. This remarkable space will launch the next chapter in the history of arts and culture in New Brunswick.”

Middlesex County Freehold Director Ron Rios, commended the project for being completed on time and on budget. He added that the county was proud to be contributing $6 million towards construction with a grant from the County Cultural and Arts Trust Fund. Additionally, he said the freeholder board has created the Arts Institute of Middlesex County, which will, among other things, “bring top quality infrastructure and resources to the four resident groups at the NBPAC.”

NBPAC debuts its first performance today with “Paul Robeson,” a play about the scholar/athlete/activist in honor of the 100th anniversary of his graduation from Rutgers University.  The play stars veteran Broadway performer Nathaniel Stampley in the title role.