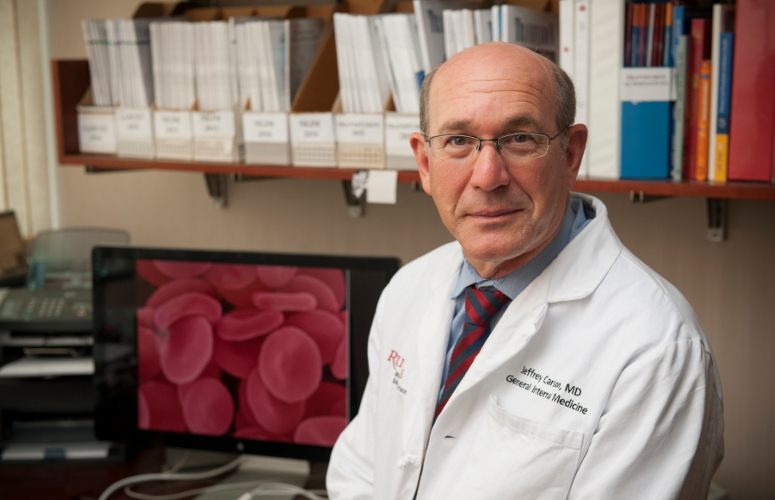 Jeffrey L. Carson, MD, was faced with a professional dilemma more than two decades ago when a patient declined a blood transfusion based on religious beliefs. The experience would prompt a career-long journey that has profoundly reshaped transfusion medicine by establishing evidence-based national standards, saving vital pints of blood and enhancing care for even the most critical of patients. In recognition of these accomplishments, the National Blood Foundation inducted Dr. Carson into its hall of fame.

Regarded internationally as a change-maker in modern medicine, Dr. Carson is an internist and practicing physician, serving as provost-New Brunswick for Rutgers Biomedical and Health Sciences, distinguished professor of medicine and Richard C. Reynolds, M.D. chair in General Internal Medicine at Rutgers Robert Wood Johnson Medical School. He also oversees the Blood Management Program for RWJBarnabas Health. Dr. Carson was one of only three individuals inducted this year into the hall of fame by the foundation, which annually honors a select group of NBF-grant recipients who leveraged their early-career funding into successful blood management-related careers.

Dr. Carson’s personal experience sparked a mission to examine the efficacy of blood transfusions, prompting him to study the question of when it is medically necessary to initiate a transfusion. Focused on transfusions to correct low levels of hemoglobin, Dr. Carson found that a restrictive transfusion threshold—the point at which patients receive a transfusion when their hemoglobin concentration is lower than 7 to 8 grams per deciliter (g/dL), rather than the more liberal threshold of 10 g/dL—is safe for most patients. His work provided the foundation for national guidelines issued in 2012 by the AABB (formally known as the American Association of Blood Banks) that endorse a conservative approach when initiating transfusions for most patients. These guidelines have proven critical to aiding physicians performing surgeries and other procedures in deciding when a transfusion is needed and how much blood to give.

Most recently, Dr. Carson led an international team of scientists and physicians in comprehensive research examining more than 60 years of data on red blood cell transfusions and 31 clinical trials that evaluated outcomes for more than 12,500 individuals who received transfusions at the restrictive rather than liberal threshold. The results of the study led the AABB to update its guidelines and recommend that most patients who need blood transfusions—including those who are critically ill—need not be given blood before their hemoglobin drops to a lower level than the practice followed traditionally. Dr. Carson co-chaired the guideline panel, working with colleagues from throughout the United States and Canada on developing recommendations to reflect the high-quality evidence. The guidelines were published online in October 2016 by the Journal of the American Medical Association (JAMA).

Last year, Dr. Carson published a review of blood transfusion research, as well as trends and risks in the field, in the New England Journal of Medicine. Invited by the journal to conduct a comprehensive analysis, the paper discussed research in the field and included a discussion of current guidelines and recommendations that can be used to determine whether a restrictive or a liberal transfusion threshold is the best treatment plan in anemic patients. In addition, the paper examined current trends in the use of red-cell transfusions, including the increased adoption of patient-focused blood-management programs and of surgical techniques that reduce blood loss, both of which conserve blood. Transfusion safety also was explored in the paper, with a discussion of risks for disease transmission, new technology being developed to reduce pathogens in donated blood, and the management of noninfectious risks, including transfusion-associated circulatory overload, among others.

Dr. Carson was recently awarded more than $16 million in support from the NIH’s National Heart, Lung, and Blood Institute to lead a new international clinical trial. The Myocardial Ischemia and Transfusion (MINT) trial will evaluate the differences in outcomes between a restrictive and a liberal transfusion approach in patients in the U.S. and Canada who have had a heart attack and have anemia. The result of the trial may once again revolutionize transfusion medicine standards, as this population of patients appears to have an increased risk of mortality with a restrictive approach, based on preliminary evidence from several small studies, including a pilot study that Dr. Carson oversaw.

The significance of Dr. Carson’s work underscores his status as a champion of evidence-based medicine, showing it is safe to use less blood in transfusions for most patients, and exemplifying his commitment to saving patients’ lives.