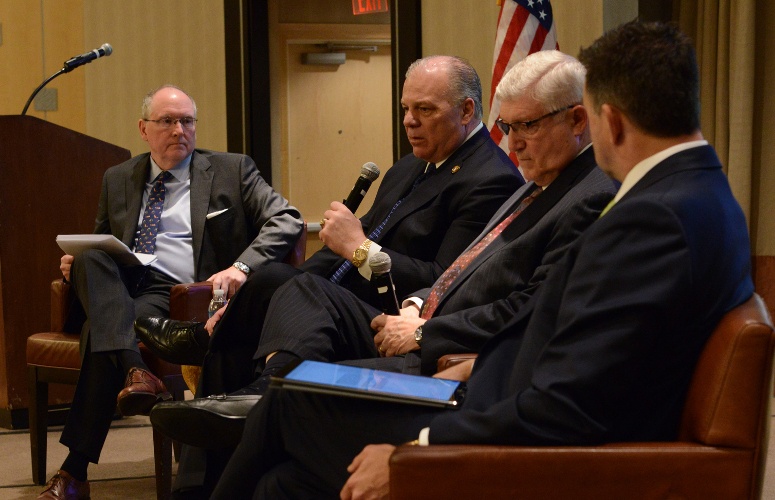 Government policymakers and commercial real estate leaders exchanged insights and ideas for addressing some of the critical economic and infrastructure issues facing the state as NAIOP New Jersey hosted its annual Public Policy Symposium at The Heldrich in New Brunswick.

In his transit update, Amtrak board chairman Anthony Coscia said, “There is a natural connection between what happens in transportation and what happens in real estate. When you think about what we need to thrive, mobility – the ability to get from point A to point B – is high on the list.”

Citing a resurgence in interest in passenger rail travel over the past five years resulting in a 65 percent increase in ridership, Coscia said Amtrak has been investing nearly $2 million a year to upgrade its nearly 50-year-old system. “By 2021, we will replace Acela with a system that will offer greater capacity, and create a new level of operating strength at Amtrak that will enable us to serve the country’s 21st century needs.”

Gateway Program is a National Imperative

While Congressional leadership understands the value of transportation and its impact on moving people around in the state, Coscia said, “The problem is that after decades of under investment in infrastructure, the issues we’re facing are not simple to solve. Gateway is a perfect example.”

The comprehensive program of rail infrastructure improvements is designed to increase track, tunnel, bridge, and station capacity, including a new, two-track Hudson River tunnel and a new Portal Bridge over the Hackensack River. While the federal government previously appropriated funds to help pay for the two projects, the current administration has reversed course.

“If the tunnel were to fail completely, which is a real possibility due to the age of the asset, it affects half a million commuters,” said Coscia. “It would cause a $22 billion reduction in the value of real estate in New Jersey, and commercial property would be similarly affected.”

Noting that no other initiative has a greater impact on the national economy, Coscia said it is incumbent on all stakeholders to find a solution. “It’s not going to get any cheaper or any easier. The Gateway Development Corporation has been designed to pull together the resources needed to bring this project to bear. We’re optimistic this model represents a new paradigm that can be replicated to handle future large initiatives.”

In his keynote remarks, Congressman Frank Pallone (D-6), Chairman of the House Energy and Commerce Committee, identified several bills which he and the committee believe can get the bipartisan support necessary for funding. These include restoring the state and local tax deduction (SALT), a package to fund major infrastructure projects and lowering the high cost of prescription drugs.

“The LIFT America Act would fund various infrastructure projects over five years, creating jobs and opportunities throughout the state,” said Pallone, noting projects would range from water supply and brownfield redevelopment to pipeline maintenance and renewable energy. “Democrats want to see some of the corporate tax that was reduced significantly in the tax bill brought back to pay for major infrastructure projects. Gateway could be part of that.”

“I believe Grow NJ has been good for the state and that the governor only took a partial look at what has taken place in the past,” said Sweeney. “Because we are a high tax state, we need these incentive programs to attract people. The message the administration is sending about incentives puts an enormous chill on the industry.

People will think nothing is going to get done here and decide to go somewhere else.”

Cimino added, “Assembly Speaker Craig Coughlin and Senator Sweeney have worked together on a range of issues, including incentive programs. We’re not sure the package as proposed includes the appropriate programs or if a cap is too limiting for our state. We will continue to work collaboratively with the governor to get it right.”

Diaz raised the issue of attracting businesses and jobs to New Jersey, asking what can be done to convince corporations that New Jersey is open for business. “We need to make a greater investment in transit, getting people to and from work, and gain better control over property taxes,” said Cimino. “Companies don’t just invest based on taxes, they invest in the workforce, labor supply and mobility.”

Sweeney said, “We have one of most intelligent workforces in the country, but we are the number one state in exporting young people. Counties are losing population and states like Pennsylvania are gaining wealth from New Jersey. We have to make some tough decisions, restructure state government and reduce taxes.”

NAIOP NJ has long advocated for liquor license reform, citing the state’s antiquated laws as a significant impediment to urban redevelopment. While Sweeney and Cimino agreed on the need for change, each expressed the importance of balancing reform with appropriate compensation for existing license holders.

Sweeney and Cimino are both in favor of PILOTs, which are a critical component of redevelopment projects in New Jersey. However, Sweeney said, “We need to update them in municipalities that are not paying their fair share of school taxes.”

The program included some of the steps needed to modernize New Jersey’s energy and water systems. Bob Gordon, commissioner of the Board of Public Utilities (BPU), spoke about the BPU’s commitment to developing the Murphy administration’s clean energy initiatives like offshore wind.

“We are also working on a new energy master plan and remaking the solar program to address deficiencies,” Gordon said. This includes developing and launching a pilot community solar program that allows multiple subscribers within a utility service area to share a large solar array. Other BPU priorities include building and financing an electric vehicle charging infrastructure and incentive programs for large energy users to improve efficiency.

David Zimmer, executive director of the New Jersey Infrastructure Bank (IBank), discussed the criteria and eligibility for the lending authority’s low interest loans for environmental infrastructure and local transportation projects. “Everyone in this room cares about cash flow. When we finance these types of projects, we bring to the table funds that are at 0 percent interest, and debt service drops dramatically.”

Zimmer said IBank is focused on environmental issues such as green infrastructure projects to address storm water management. Through this program, developers are well positioned to help municipalities meet their June 1, 2020 deadline to have a long-term control plan in place to address combined sewer overflows (CSOs). He emphasized that funding is allocated to communities, not projects. “This is a cheap, efficient and competitive program, and developers need to work in tandem with towns to tap into it. Focus on finding out what communities need and get them excited about your projects.”