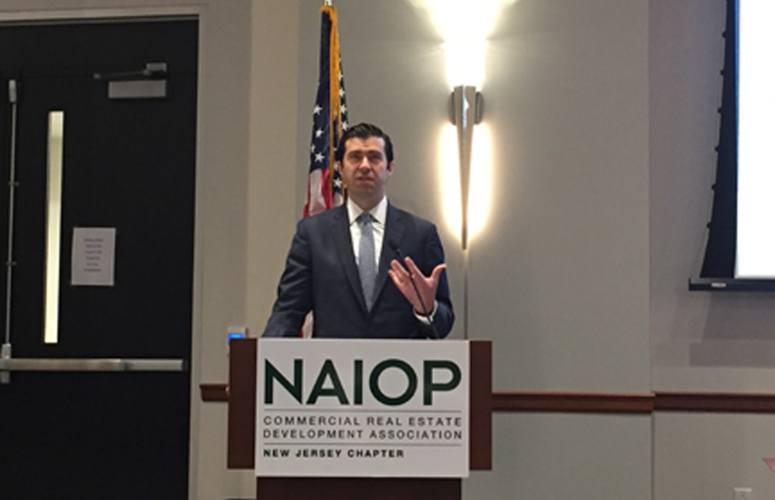 During his keynote remarks, Sullivan outlined the context in which the Murphy administration has been thinking about economic growth. He cited New Jersey’s assets – including education, technology and a diverse workforce – as well as challenges such as stagnant market sectors, slow employment growth, stagnant wage growth, and a significant decline in venture capital investment in the state’s economy.

“In October the governor rolled out an economic development strategy focused on building a stronger and fairer economy and reclaiming our position as a state known for innovation,” said Sullivan. “Incentives have to be a tool in the toolkit in service of this strategy.”

Sullivan addressed the plan’s strategic priorities, which focus on investing in infrastructure and workforce development, including closing the state’s racial and gender wage and employment gaps, as well as supporting innovation and improving New Jersey’s competitiveness and business climate. “We need to make a commitment to industries where we can grow our competitive advantage, not just on the incentive side but in providing an ecosystem of support to innovative sectors of our economy.”

Maintaining New Jersey’s competitive edge is a key issue for NAIOP NJ and the commercial real estate sector, which has relied on incentive programs to help fuel growth since the economic downturn. Governor Murphy has proposed revamping the state’s incentive programs “to be targeted, strategic and part of a broader strategy to produce widespread benefits and growth for the people who live here,” said Sullivan.

Of the five new programs in the governor’s economic development plan, the Brownfield and Historic Preservation Tax Credit Programs have been positively received by the commercial real estate community. According to Sullivan, the venture capital community has responded positively to the proposed New Jersey Evergreen Innovation Fund, which is focused exclusively on “super-charging” investment in young and innovative businesses.

However, the state’s two primary incentive programs – Grow New Jersey and Economic Redevelopment and Growth (ERG) – have come under scrutiny in recent months, and there has been considerable controversy surrounding proposed replacements for the programs, which are set to expire June 30.

During a panel discussion of state incentives and Opportunity Zones, led by Anthony Pizzutillo of Pizzutillo Public Affairs, State Assemblywoman Eliana Pintor Marin, who chairs the budget committee, said, “There are good opportunities in the new programs, but to allow Grow NJ and ERG to expire would be a mistake.”

Pintor Marin has proposed extending the deadline by a year in order to allow time for the governor and lawmakers to find common ground on updated programs. “I would like for the tax credits discussion to be separate from the state budget conversation. There is a lot of room for negotiation and I think, at the end of the day, all of us here just really want to see our state move forward.”

Sills Cummis & Gross’ Ted Zangari, who spoke on behalf of the Smart Growth Economic Development Coalition, emphasized the fact that while policymakers in Trenton disagree on the specifics of financial incentives, they all agree incentives are important. He also noted there is a general consensus that the Grow NJ award formula is “more generous” than the current economic climate requires.

Zangari said one of the key challenges the state faces is competition from neighboring states that currently meet the needs of businesses looking to relocate and are less expensive than New Jersey. “Grow NJ has provided the ‘premium’ companies often need to close or narrow the long-term cost gap.”

The Coalition’s proposed improvements include capping the overall award amount at the demonstrated cost-gap for the period of time an outside company commits to remain in New Jersey; resizing the net benefit test; and designating the state as the “buyer of last resort” of tax credits.

Banker Group’s Tom Banker said that the commercial ERG program currently operates well and should remain “a gap-closing fund.” He notes that the legislature should address the need to “balance incentives and some of the strict mandates that come with them, like green initiatives and prevailing wage.”

Banker added, “Residential ERG would benefit from an explicit statement about what the program is trying to accomplish. The size of the award should reflect the affordable and workforce housing included in the project.”

“Municipalities don’t have a big toolbox in terms of what they have to offer to investors,” said discussion leader Steve Santola of Woodmont Properties. “The reason PILOTs have been so successful, especially over the past five years, is that they are simple to negotiate and self-policing.”

Mayors Derek Armstead of Linden and Jim Maley of Collingswood shared examples of how PILOTs have been used to attract developers to invest in their towns. Maley spoke about the recent shift from long-term tax abatements that can last up to 30 years to using short-term PILOTs for smaller projects.“From duplex conversions and new condominium projects to infrastructure improvements, there are 100 different ways to make a five-year tax abatement work depending on the specifics of a project,” he said.

Noting that Linden is not eligible for the urban-type incentives many other municipalities are entitled to, Armstead and local leaders embraced the PILOT concept to develop a number of abandoned, blighted properties in transit village areas. “Taxes continue to go up and developers want to see stability. Negotiating 30-year PILOTs provides that stability and allows us to build transformative projects.”

Santola asked panelists whether there should be formalized legislation regarding a percentage of tax revenue from PILOTs local school boards receive. There were several comments expressing concerns about seeing that education is properly funded and not short-changed while at the same time ensuring that school boards use the money responsibly.

State Senator Troy Singleton has introduced a proposal to address these issues. “We are looking at how to break up the fee so schools receive some benefit from projects coming in, and this ratio varies from town to town. I’ve intentionally asked the Senate President not to move my proposal forward because we need to have a broader conversation about how to find and move revenue into education equitably.”

On the issue of prevailing wage, George Sowa, founding CEO of Greater Trenton, said, “We want to do the right thing on prevailing wage but it can be challenging. I would like to see us limit prevailing wage to projects above a certain size. On some smaller projects, the incremental and administrative cost is far in excess of what the value is.”

Singleton cautioned, “We need to be mindful of the limited pool of money you have when talking about adding labor costs. We want a certain number of labor hours to come from workers who live in the community.”

Maley added, “If I can help make sure folks in my town are getting work, that’s all part of the balance of getting the most value from PILOTs. Tax abatement programs help us do major projects that change perceptions of our town and show that we are willing to work with businesses in whatever way we can.”