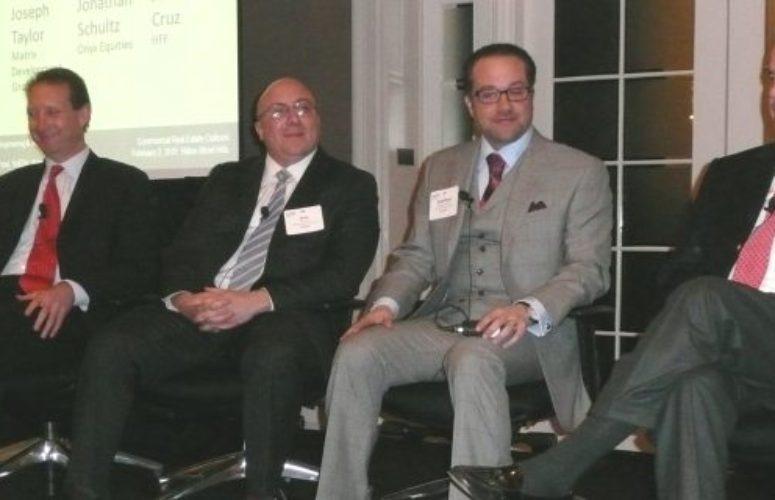 “We’re bullish on industrial,” said Joseph Taylor, president and CEO of Matrix Development Group, a view echoed by others on the panel. “Our focus is on buying land, and we’re big believers in speculative development. We’ve got half a million square feet of spec up now and another 1.5 million square feet coming up by the end of the year.”

Multifamily is another sector showing continued strength, despite concerns about overbuilding. “In New Jersey, everyone wants to get into apartments,” said Eric Witmondt, CEO of Woodmont Properties. “It’s a financial business, and as long as the capital wants apartments, New Jersey will be positioned well in the overall economy.”

Asked about the perception that there is an oversupply of product, Witmondt noted that this may be a site-specific issue. “There was enormous pent-up demand, and overall there is still plenty of room for growth. As prices rise in areas like New York City and Brooklyn, a lot of product in places like Jersey City will be absorbed.”

Lower gas prices resulting in more disposable income for consumers has been a key factor in sustained demand in the retail sector. “We’re seeing grocery-anchored properties trading in the high 5’s,” said Jose Cruz, senior managing director with HFF. “Retail has been consistent, and many who have been buying multifamily now feel the need to diversify.”

Cruz also cited growth in the office market, particularly in the suburbs, and attributes this in part to increased interest by investors in diversifying their assets. “Suburban office closings are up 18% nationally over last year. There’s now demand, and we’re seeing a change on the investor side and transactions closing.”

Jonathan Schultz, co-founder and managing principal of Onyx Equities, LLC, noted, “There is so much money chasing capital. We are going to have a lot of velocity in 2015, 2016, and 2017. The average CMBS is down and we’re selling deals that we’ve stabilized.”

In terms of current or future challenges, the prospect of both rising interest rates and property taxes continue to be causes for concern, as does the cost of doing business in a state “where success is so dependent on municipalities and counties,” according to Michael McGuinness, CEO of the commercial real estate development association. “However, we are seeing more openness to change as municipalities realize the benefits that come with commercial development and as developers focus on creating a positive impact in the community,” said McGuinness.

Schultz added, “I see another three to five years of entrenching. People need to figure out how their towns are going to work in the future to make things more productive.”

The annual event included the swearing in of a new slate of officers to lead NAIOP New Jersey. Outgoing chapter president Michael Seeve of Mountain Development Corp. said, “Our industry is much stronger now than it was two years ago and so is this organization. My thanks to our members, committees and staff, led by Mike McGuinness, for your hard work and commitment to success.”

“Much has been accomplished during Michael’s tenure,” said new Chapter President Clark Machemer of The Rockefeller Group. “I look forward to working with you to ensure the continued growth of our membership, education and advocacy efforts over the next two years.”