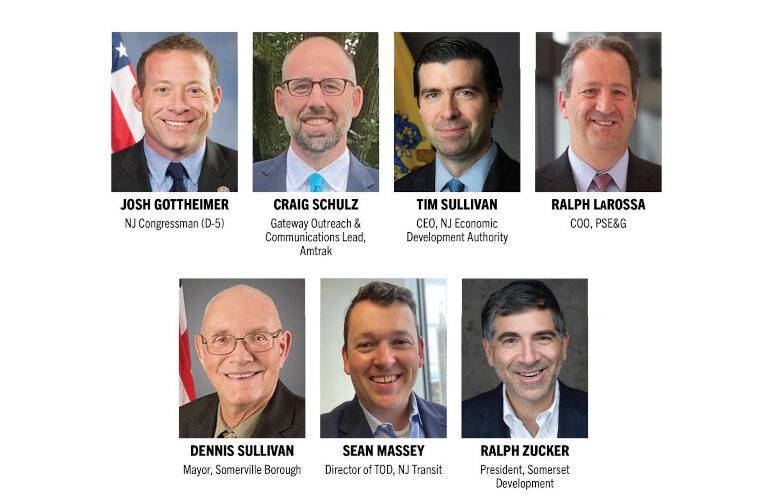 Experts from the public and private sectors discussed critical infrastructure issues and initiatives at the federal, state and local levels during NAIOP New Jersey’s Infrastructure Update, which was held at the Northeast Carpenters Apprentice Training Center in Edison.

In his opening remarks, New Jersey Congressman Josh Gottheimer – who is co-chair of the bipartisan Problem Solvers Caucus – addressed the current status of federal infrastructure funding and emerging national priorities.

“We have been working with a group of senators on two major pieces of legislation,” said Rep. Gottheimer. “The Bipartisan Infrastructure Investment and Jobs Act provides funding for our roads, our rails, the Gateway Tunnel, broadband, water infrastructure, and resources for electric vehicle charging stations – all of which are very important, particularly for New Jersey. This is a once-in-a-century infrastructure bill, and it is a game-changer for us.”

Rep. Gottheimer also spoke about what President Biden calls the Build Back Better bill. The legislation, which was passed by the House and is working its way through the Senate, focuses more on social infrastructure, including affordable childcare with pre-K, climate change and providing relief to taxpayers – especially those in states with a high cost of living like New Jersey – by restoring the federal deduction for state and local taxes (SALT).

Asked about the process for distributing the $1.2 billion in federal infrastructure funds and where it will go in New Jersey, the Congressman said that funding streams vary. “Some of the resources have already been allocated based on established priorities. For example, Gateway is something we fought for and that money is predetermined. The distribution of other resources is formula-driven. New Jersey will get a certain level of resources based on a national formula, and that’s how most of the funds will be distributed. The state also has a set of projects and priorities, and has its own process for deciding how it allocates funds.”

Craig Schulz, who leads Amtrak’s outreach and communications on the Gateway Program, said the project is now shifting from the planning to the delivery phase. “The renewed federal partnership has been tremendously beneficial to us. With funding in place, it will grease the skids for work to move forward in the Northeast Corridor and beyond.”

While the focus of the program has been on construction of the new Hudson Tunnel (set to begin in 2023) and North Portal Bridge (scheduled for early 2022), Schulz said, “Gateway is more than just the tunnel and bridge. They eliminate two major points of failure, but it is a suite of projects that will expand a two-track system to four tracks, doubling capacity and modernizing the busiest rail corridor in the Northeast.”

Key among these projects is expanding the track and platform capacity of Penn Station to service increases under Gateway, which involves collaboration between Amtrak and NJ TRANSIT. Projects in New Jersey include replacement and rehabilitation of several bridges, track relocation, and developing a new Secaucus/Bergen Loop that would eliminate the need for many NJ TRANSIT rail passengers to transfer at Secaucus – creating a one-seat ride to Manhattan. “These are the kind of transformative benefits we are talking about,” said Schulz. “There will be a lot of excitement around these second-phase capacity projects now with infrastructure funding in place.”

Clean Energy and The Electric Grid

Ralph LaRossa, COO of Public Service Enterprise Group and president and COO of PSEG Power, highlighted PSEG’s priorities in response to climate change, transitioning to clean energy and improving the reliability of the electric grid.

As CEO of the NJ Economic Development Authority, Tim Sullivan is committed to making New Jersey a national model for inclusive and sustainable economic development. “The reality of climate change is here – not over the horizon,” said Sullivan. “It’s easy to get depressed about that, but from an economic development perspective, it’s a cause for optimism. There are enormous opportunities to be had amidst this crisis.”

On the offensive side, Sullivan sees clean energy as an enormous economic development opportunity – and wind energy tops the list.