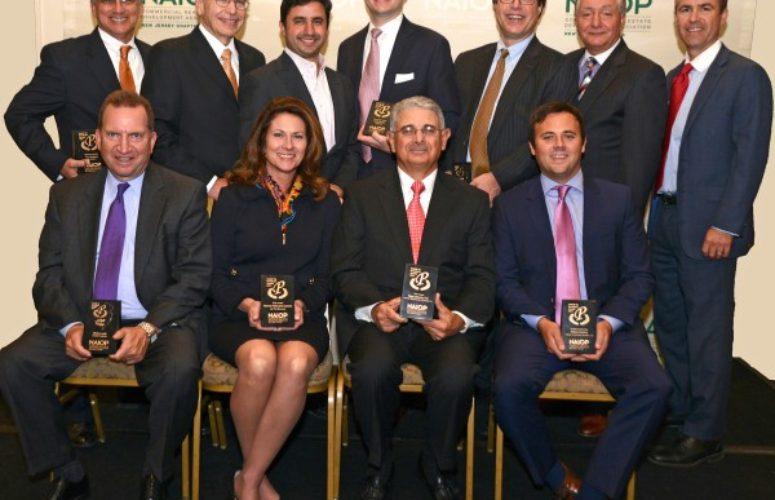 Leadership, advocacy and volunteerism were on the agenda at NAIOP New Jersey’s 2014 President’s Awards and Hall of Fame Dinner. The 10th annual event, attended by nearly 300 at the Meadowlands Hilton in East Rutherford, also showcased the awarding of the Frank Visceglia Memorial Scholarship.

“We are here tonight to honor these outstanding members for their exemplary service to the association,” said Michael G. McGuinness, CEO of the commercial real estate development association.

“We are pleased and honored to recognize nine of the most accomplished members of our organization,” said Dave Gibbons of Elberon Development Group, the chapter’s vice president-special events.

“Since this event was first held in 2005, it has grown dramatically, becoming one of our most important events,” said NAIOP New Jersey President Michael Allen Seeve of Mountain Development Corp., who presented the awards. “That mirrors the growth of our organization as well, which now numbers 648 members.

“Each of tonight’s award recipients has helped shape our chapter in a positive way,” said Seeve. “As we reflect on their accomplishments, I would also like to thank each and every member who takes the time to get involved, whether to contribute technical expertise, or volunteer, or reach out to public officials to support our public policy agenda.”

The Pillar Award, honoring members who set an example of involvement, was presented to Ralph Orlando of Partner Engineering & Science, Inc., and Monica Padovano Casiello of U.S. Title Solutions. Both have extensive committee service and are NAIOP NJ Master Sponsors.

Frank Greek of F. Greek Development was accorded the Legacy Award, honoring members whose contributions have a lasting impact. Respected industry-wide as a person of integrity, he became active as a NAIOP New Jersey trustee in 1988 and has been a long-time supporter of the chapter’s advocacy efforts.

The Advocacy Award, honoring those who have done outstanding work in public policy, was accepted by Ciro Scalera of NJ LECET (Laborers Employers Cooperation and Education Trust). “He has been an invaluable partner in bringing the labor perspective and support to our advocacy efforts,” said Seeve.

The Rising Star Award, honoring Developing Leaders (35 and under) who have demonstrated strong leadership skills, was garnered by David Avery of Roseland, a subsidiary of Mack-Cali Realty Corp. He was honored for his tremendous impact as a member of the Board of Trustees and the Legislative Committee, and as co-chair of the Developing Leaders (DL) Committee.

Andrew Goetting of Hollister Construction Services was honored as Volunteer of the Year for his service on the Developing Leaders Committee, hosting a DL event, and securing his company’s support of the Gala and the Golf Classic.

Three industry leaders comprised the NAIOP New Jersey Hall of Fame Class of 2014, honoring members for their distinguished record over a period of many years. Jeffrey Schotz of SJP Properties has been involved in leasing more than 20 million square feet with many of the world’s premier corporations, while serving as a NAIOP New Jersey trustee for 15 years, six years as an officer, and as chairman or member of all of the chapter’s core committees.

Also, Vincent Marano has served for more than 25 years as chief operating officer of National Business Parks, whose prestigious properties include College Park at Princeton Forrestal Center and Southgate Corporate Center in Morris Township. He was cited for his long history of service to NAIOP New Jersey, especially in support of its advocacy efforts.

The Frank D. Visceglia Memorial Scholarship Fund supports educational opportunities for students who will have a direct impact on achieving the delicate balance between the economy and the environment. Awarded annually to an Eagle Scout, the 2014 scholarship was presented by Nicole Visceglia-Rodgers, Frank and Peter Visceglia of Federal Business Centers, and NAIOP New Jersey past president Jeffrey Milanaik of Bridge Development Partners to Ryan Edward Hollender of Troop41 in Bridgewater, N.J.

For his Eagle project, Hollender, who is currently studying mechanical engineering at the Rochester Institute of Technology, led a team of friends, family and fellow scouts in clearing an overgrown “Blue” trail and refurbishing a 46-foot pedestrian bridge at King Park in Bridgewater for the enjoyment of walkers, hikers, bikers and runners.

“Congratulations and thanks to all of these honorees, and everyone else who contributes to the success of our organization,” said McGuinness.