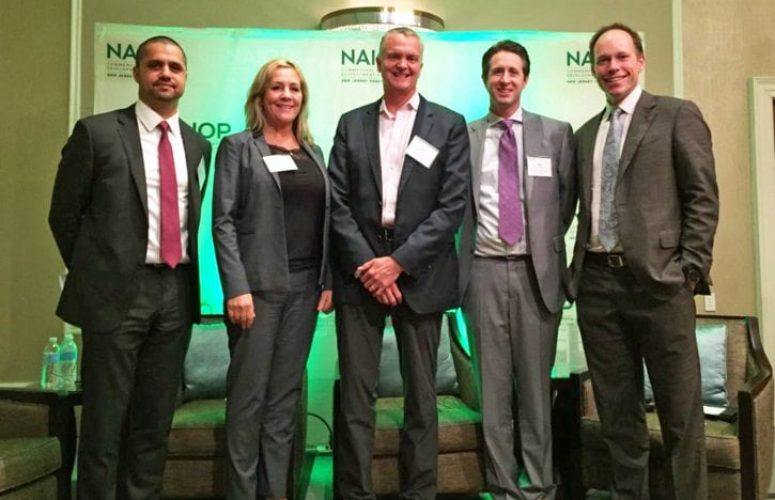 While the future of brick-and-mortar retailers is decidedly uncertain, undesirable locations are likely to suffer as the market transforms, while well-located properties that can attract “experiential” retailers will thrive.

This was one of the key takeaways shared by industry experts at NAIOP New Jersey’s June 6 chapter meeting, held at the Teaneck Marriott at Glenpointe. Led by Rockefeller Group’s Clark Machemer, the panel discussion focused on current retail trends, in particular the shift to “experiential retail” and its impact on commercial real estate development as well as opportunities for investors.

“We are hearing a lot of talk about how traditional retail is dying,” said Machemer. “As developers and property owners struggle to determine the right mix of retailers, store sizes and formats, how can brick-and-mortar stores evolve to compete in today’s omnichannel world?”

“We wouldn’t agree that retail is dying, but it’s definitely changing,” said Herbert Eilberg, chief investment officer at Urban Edge Properties, whose company spent $500 million over the past six months buying shopping center properties in northern New Jersey and the New York metro area. “The projects we’re interested in are necessity and value driven, and we’re looking at how we can complement them by adding to the experience. The word we like to use is engagement. Are we engaging the consumer?”

Nancy Erickson, executive managing director with Colliers International, cited the continued dominance of Millennials as the key decision-makers in terms of what’s next in retail. “We’re following their lead and focusing on tenants that offer something they can’t do on Amazon while they’re watching TV,” she said. “This includes restaurants, discount fashion retailers and entertainment such as luxury dine-in movie theaters. Fitness and medical services, such as urgent care centers and medical spas, are also growing”.

Erickson noted that food was “the number one discussion” at the recent International Council of Shopping Centers (ICSC) conference in Las Vegas. “We all want good food and we’re looking for something unique. Although national chains will do well, it’s the out-of-the-box restaurants that are going to influence development both in shopping centers and mixed-use projects.”

Mark Pottschmidt, co-founder of Stanbery Development, agreed that food is replacing fashion as a key driver of foot traffic to the company’s retail lifestyle centers and mixed-use projects. At Stanbery’s planned mixed-use project in Parsippany, he said, “We expect 30 to 40 percent of the tenants to be food operators ranging from fast casual to white table cloth. Amenities on the ground will drive demand for the apartments above.”

Erickson, whose Retail Team manages prominent mixed use assignments including Bell Works in Holmdel and Valley & Bloom in Montclair, stressed the importance of communication between developers and retailers to create more engaging shopping experiences.

“Retail is often an afterthought in mixed use developments. The column widths of the office and residential requirements above the retail portion define the width of the retail spaces and storefronts. This can make leasing to national retailers difficult, as the sizes are now pre-defined.”

Brian Whitmer, senior director Metropolitan Area Capital Markets Group with Cushman & Wakefield, said investors have returned after a lull that resulted from uncertainty over interest rates and the new administration. “We’re seeing the capital and buyers come back into the market, and the interest is in quality retail properties with good tenant mixes,” said Whitmer. “Sellers are starting to become more active, and many of them

have been looking at strategic dispositions of noncore, secondary and tertiary assets.”

Whitmer noted that the investor profile has shifted to high net worth individuals, 1031 exchange buyers and syndicated money. “We’re also seeing people reinvesting in their better properties to improve on what they have,” he said.

When asked about the future of New Jersey’s malls, the panelists agreed there will be a major correction. “Across the U.S., 20 percent of malls will close in the next five years,” said Erickson. “The expectation is that upscale malls like Short Hills and discount malls which draw from a broad customer base will continue to do well. Less desirable locations will be de-malled and repurposed.”

Eilberg added, “Malls are interesting right now and there is no logical next step for them. We bought Hudson Mall in Jersey City, which was partially de-malled. Existing ownership had taken good care of the asset and there are clearly improvements to be made. However, we feel that it’s great waterfront real estate, our tenants are doing well and it presents a lot of different options.”

Whitmer noted, “We’re at the forefront of experiencing the dynamics of retail adapting to e-commerce in real time. Food, fun and fitness are filling voids, along with the repurposing of large boxes for last-mile distribution.”

Panelists were positive about the future of national big-box retailers, citing Lowe’s, Home Depot and Best Buy as brands that will continue to grow. Pointing to the continued expansion of Marshalls, T.J. Maxx and Home Goods, Erickson called the brand “a tenant to follow.” Eilberg singled out Best Buy for its return to traditional retail fundamentals, a move that has “reinvigorated the chain and we think they’re a winner.”

On the whole, retailers offering convenience, value and customer service in good locations are going to be successful. Less desirable locations offer ample opportunity for repurposing and redevelopment. “There is an oversupply of retail, and the fact that supply is shrinking is frankly a good thing for the market,” noted Eilberg. “At the end of day, the idea is to create a win-win. We have to work together and think creatively about ways to revise the model.”