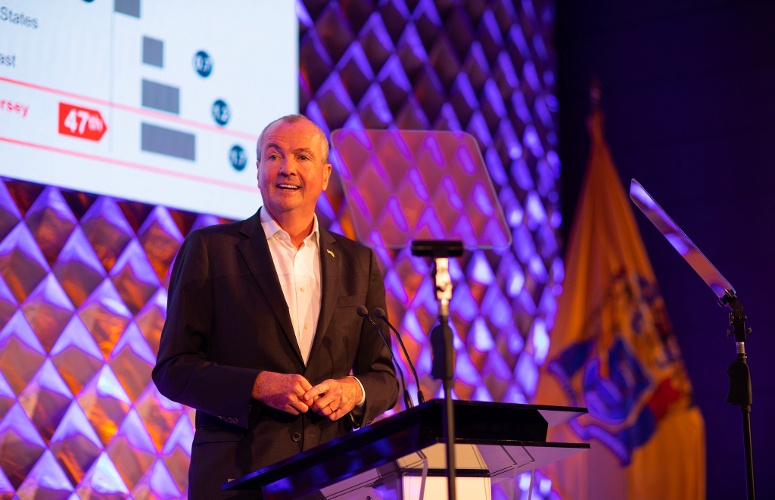 Gov. Phil Murphy today unveiled an economic development strategy that focuses on five measureable goals to be achieved by 2025. Similar to his campaign promise of a fairer economy for all state residents, he said the success of the plan will hinge on inclusivity of women, people of color and immigrants, and a renewal of the state’s leadership role in innovation.

“Today, we outline the path for New Jersey to once again be a visionary leader in our national and global economy,” the governor said before a large crowd gathered at ON3, the campus and biotech office space located at the former Hoffman-LaRoche site on the Clifton-Nutley border. “We have all the ingredients – a highly educated population, one of the best locations in the nation, and immense talent— and now we have the plan,” the governor said.

The strategy’s five key goals are:

The governor said that achieving these goals will not be easy, but they are achievable. “To succeed, we must return to the core values of our state and re-embrace our historic role as the world’s leader in innovation,” Murphy said.

Listing many of the state’s key attributes, he then said, “Everything needed to dominate the innovation economy is directly under our noses.”

According to New Jersey Business & Industry Association President and CEO Michele Siekerka, the strategy is “totally synonymous with NJBIA’s vision to reclaim our stature as an innovation state.”

Siekerka also cautioned that the plan won’t work without addressing the cost of doing business in New Jersey, and that more stakeholder input was needed from the business community.

“Our businesses are the job creators who provide salaries, benefits and a way of life for millions of residents,” she said. “They galvanize our communities. They are our boots on the ground and the lifeblood of our economy. They should be mined for their input, not for more of their output.”

“The big idea” of the day, as Murphy described it, is the creation of the $500-million New Jersey Innovation Evergreen Fund (IEF) that will “supercharge the return of venture capital to the state in order to invest in a diverse array of New Jersey-based startups.”

Half of the IEF money ($250 million) will come from the proceeds of competitive auctions of new state tax credits. The other half will come from private venture capital firms.

As Gov. Murphy explained: “Corporations will bid on new New Jersey Economic Development Authority tax credits. The winning bidders will be the ones who offer both the best price and the best commitment to help entrepreneurs through mentorships, networking and other resources. The bidders will have some sort of state tax liability to give them incentives to bid. The IEF will then invest the auction proceeds alongside funds from venture capital firms into promising startups with the potential to scale up and create jobs.

“State-level venture capital funds have thrived elsewhere, but with our talent and location, the IEF can help us become a model for our country. Some investments will be home runs, some will be solid singles, and there may even be a foul ball or two, but that is the nature of startups. However, we will reinvest the returns into more startups. The IEF will also be a powerful new tool to bring startups to our incubators and accelerators,” Gov. Murphy said.

He also touched upon investments in apprenticeships and job training programs, saying, “I am sick and tired of our young people being among our greatest exports.” A comprehensive suite of talent retention and workforce development and support programs, called NJ Talent, will reverse this trend of young people leaving the state, he said.

Under a NJ Communities initiative, the state’s urban cities and other under-served communities will experience investment, job creation and improved quality of life. Commenting the work being done under the Opportunity Zone program, including a one-stop shop to help guide the 169 Opportunity Zones identified throughout the state, Gov. Murphy said, “We are taking our urban communities and telling them the state is going to be your full bore partner … we are going to get this right.”

He also discussed the NJ Aspire Tax Credit Program, a catalyst for investments in commercial, residential and mixed-use developments in cities, downtowns and suburban neighborhoods served my mass transit. “NJ Aspire will facilitate the conversion of surface parking lots, vacant and abandoned lots, and other underutilized properties into job-creating and tax-generating opportunities. It will help bring market rate housing to distressed urban areas while also ensuring mixed income and affordable housing in our suburbs,” he said.

The governor also touched upon the importance of investing in offshore wind energy, solar power, New Jersey Transit and getting the Gateway Tunnel project underway.