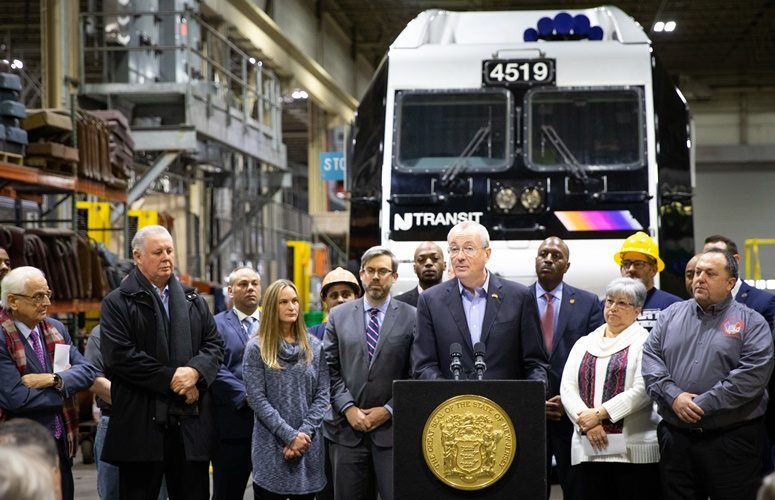 Gov. Phil Murphy signed legislation to comprehensively reform NJ Transit’s governance and management to improve service and reliability for New Jersey commuters. The bill includes reforms to NJ Transit’s board of directors to make it more responsive to commuters; expands oversight over NJ Transit, both by the public and the Legislature; institutes regular disclosure of accident and safety performance reports; strengthens whistleblower protections; and creates Customer Advocate and Chief Ethics Officer positions within the agency.

“Rebuilding NJ Transit for the one million New Jersey residents who ride the trains and buses every day has been a priority since I began my campaign for Governor,” said Governor Phil Murphy. “Thanks to our actions in partnership with our colleagues in the Legislature, NJ Transit will now be able to direct its efforts more efficiently and effectively to improve safety, reliability, and services for commuters. I am proud to sign a bill into law that is committed to putting NJ Transit on a positive track moving forward.”

“This reform legislation is not a panacea for all of the problems that have plagued NJ Transit,” said Senate Majority Leader Loretta Weinberg. “But it will help NJ Transit’s new leadership deliver the safe, reliable, on-time service its riders have a right to expect by making NJ Transit one of the nation’s most representative, responsive and transparent public transit agencies. This new law responds directly to the many commuters who too often felt that NJ Transit had stopped listening to them and caring about their needs, and will make sure that never happens again.”

“This is the reform that NJ Transit needs if it’s to remain accountable to the people of New Jersey,” said Assemblyman John McKeon. “What we learned last year was shocking and disappointing. NJ Transit has lost its way through a series of bad policy and personnel decisions that left it unable to fulfill its basic duty – get people to work safely on time. Commuters are angry, and rightly so, but with this new law, we move toward ensuring NJ Transit once again becomes a national model of efficiency and accountability that is answerable to, first and foremost, the commuters.”

“After the year and summer we’ve had with delays and pending construction disrupting service for commuters, it is time for a larger effort to be made to reform NJ Transit operations,” added Assemblyman Daniel Benson, who is chair of the Assembly Transportation Committee. “New Jersey residents who depend on NJ Transit to get to work, school or return home need reliable service and clear, regular communication. This new law begins the much-needed reform NJ Transit sorely needs and commuters deserve.”

“These reforms will bring about a modernized agency easily and transparently held accountable by the public,” Assemblywoman Patricia Egan Jones said. “It places NJ Transit on the path to once again to become an effective, reliable source of public transportation which thousands of commuters and New Jersey residents rely on.”

“New Jersey depends on reliable public transportation to keep our economy buzzing,” said New Jersey Future Executive Director Peter Kasabach. “Demand for transit-friendly locations is growing, but these places can’t be successful without transit that can be counted on. This bill is a step toward making steady and predictable service a reality for the thousands who use it every day. We look forward to working with the governor to facilitate more transit-oriented development projects throughout the state that can capitalize on improved transit service.”