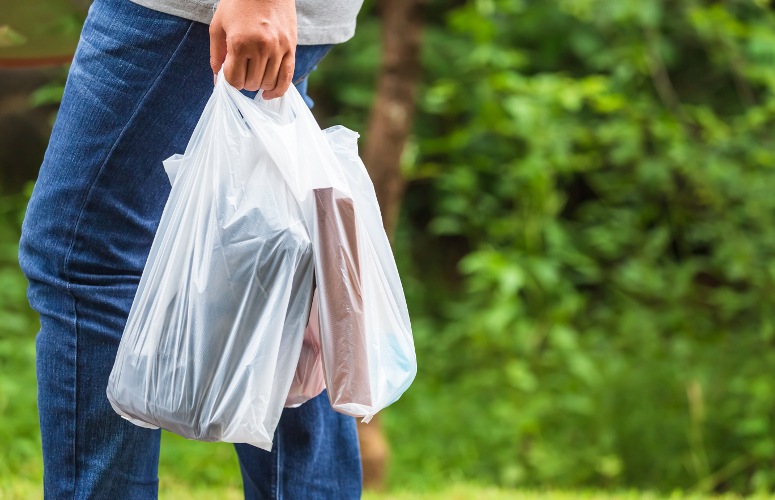 New Law Will Be the Strongest Bag Ban in the Nation

Gov. Phil Murphy today signed S864, which prohibits the use of single-use plastic and paper bags in all stores and food service businesses statewide. This bill is a significant step to reduce harm and pollution that these products cause to our environment.

“Plastic bags are one of the most problematic forms of garbage, leading to millions of discarded bags that stream annually into our landfills, rivers, and oceans,” said Governor Murphy. “With today’s historic bill signing, we are addressing the problem of plastic pollution head-on with solutions that will help mitigate climate change and strengthen our environment for future generations.”

Starting May 2022, both plastic and paper single-use bags, as well as disposable food containers and cups made out of polystyrene foam, will be banned. Paper bags require resources and energy to produce, contributing to pollution. Moving forward, the focus throughout the state will be on using reusable bags. The following products will be exempt for an additional two years after May 2022:

Under the new law, food service businesses will be allowed to provide single-use plastic straws only upon request starting November 2021.

“From our cities to our shores, single-use plastic bags unnecessarily litter New Jersey’s most treasured spaces and pollute our ecosystems,” said New Jersey Department of Environmental Protection Commissioner Catherine R. McCabe. “By banning single-use plastic bags, Governor Murphy and our legislature continue to make a New Jersey a national leader in environmental protection and the DEP stands ready to implement these new measures and educate the public.”

“Environmental activists and supporters of this bill have been waiting years for this moment. Plastic pollution has caused untold damage to the environment and to our public health,” said Senator Bob Smith, chair of the Senate Environment and Energy Committee. “Taking action to fight plastic pollution now is key to moving towards a plastic-free future. I want to thank the Governor for being a strong partner on this legislation.”

“If you go to the shore, you see plastic buried in the sand and floating in the ocean. There are an estimated 150 million metric tons of plastics currently in our oceans and about eight million metric tons are added each year,” said Senator Linda Greenstein, vice-chair of the Senate Environment and Energy Committee. “We have heard from countless activists and residents around the state, and they have made it clear that they are sick of plastics polluting our ecosystem. Now that this bill is signed by the Governor, New Jersey is closer than ever to a cleaner, greener future.”

“The health and safety of future generations depend on the choices we make today. Single-use plastic products are one of the single greatest threats to our oceans, environment, and health,” said Assemblywoman Nancy Pinkin. “Many of our municipalities have already taken steps to limit the use of carryout bags and containers; now, it’s time for the state to act. This is the strongest law implemented in the nation to curb the use of these products and maintains New Jersey’s stance as a leader in environmental protection.”

“Single-use carryout products fill up landfills and find their way into our oceans,” said Assemblyman James Kennedy. “There are more sustainable, environmentally-friendly alternatives that many are already using in place of these products. This new law aims to encourage all of us to act together to protect New Jersey’s environmental future.”

“Nearly 40 towns in New Jersey have banned plastic bags, and many others have passed ordinances addressing their use,” said Assemblyman John McKeon. “This new law supports community efforts to reduce litter and protect their environments. The reality is: disposable plastics are causing damage to our environment. Anything we can do to curb its effects will help us better protect our oceans, our communities, our health, and to fight climate change.”

“This is an environmental victory that’s been years in the making,” said Amy Goldsmith, NJ state director, Clean Water Action. “Thank you, Governor Murphy, not once but twice – first for vetoing the 2018 bill that would set back efforts to prevent plastic waste, and now for signing the nation’s strongest waste reduction law. It was well worth the wait. New Jersey is now leading the paradigm shift away from single use disposables to reusables.”

“Today is an historic day for New Jersey’s waterways, 130-mile coastline, and open spaces. This nation-leading single-use plastics and paper reduction policy will do exactly what we need it to—reduce the 4.4 billion single-use plastic and 1,300 football fields of trees worth of paper bags that New Jerseyans use every year,” said Ed Potosnak, executive director, New Jersey LCV. “As the political voice for the environment in New Jersey, we have even more to celebrate – this is the third of our five bold Common Agenda for the Environment legislative priorities signed into law this session. We are thankful to Governor Murphy, bill sponsors Senator Bob Smith and Assemblywoman Nancy Pinkin, and our partners at ANJEC, the Coalition for the Delaware River Watershed, and New Jersey Audubon who have helped us lead the charge for this nation-leading legislation.”

“It’s a good day for marine critters and the power of the people,” said Cindy Zipf, executive director of Clean Ocean Action. “For over 35 years, thousands of COA’s Beach Sweep volunteers have collected over 7.2 million pieces of trash, mostly plastic, off NJ’s beaches. Thanks to Governor Murphy and the NJ Legislature, we’ve successfully drawn a line in the sand and made NJ a world leader in reducing the plastic plague on this marvel of a planet.”

“Kudos to Governor Murphy and Senator Smith for having the guts to do something big to help clean-up our waterways. Barnegat Bay and our beaches will be cleaner for people to enjoy and wildlife to thrive. We are grateful for your leadership especially during these challenging times,” said Britta Forsberg-Wenzel, executive director, Save Barnegat Bay.

“The Surfrider Foundation applauds the Governor’s decision to sign this bill. New Jersey regains some leadership on environmental issues by taking on single-use bags, foamed plastic, and plastic straws all at once with this legislation,” said John Weber, Mid Atlantic regional manager for the Surfrider Foundation.

“This is a great day. New Jersey has now become a national leader in going after plastics and protecting our environment. This statewide plastic ban will help protect our rivers and streams from plastic that has been known to kill whales, get into our environment, and into us. This comprehensive plastic ban not only bans plastic bags, but also polystyrene and the offering of plastic straws. This is a critical step forward when it comes to protecting our environment from plastics,” said Jeff Tittel, director of the New Jersey Sierra Club. “There were those who wanted legislation that only put a fee on plastic and fought for a weak bill 2 years ago. We want to thank the Governor for all he did signing this bill and vetoing the weaker bill. Now we have the strongest plastic ban in the nation.”

“Governor Murphy signed the strongest single-use ban on plastics in the country to prioritize our wildlife and our communities over endless plastic waste polluting our waterways,” said Doug O’Malley, director of Environment New Jersey. “Plastic and polystyrene items we use for 15 minutes should not end up in our environment and communities for endless generations. Polystyrene cannot be cost-effectively recycled on a mass scale and we need to transition to reusable bags. We are deeply thankful for Governor Murphy’s leadership vetoing a half-measure plastics bill two years ago and his support for a more comprehensive ban and we are thrilled that New Jersey can be a national leader in reducing single-use waste.”

“Hats off to Governor Murphy for signing this sweeping plastic reduction law.  This is exactly the type of law we need to reverse the projection that in the next decade, there will be one pound of plastic in the ocean for every three pounds of fish.  This never would have happened without broad public support and local governments first adopting their own plastic reduction laws.  Now is a good time for all residents of New Jersey to start using reusable bags and avoid polystyrene and not even wait for the new law to kick in,” said Judith Enck, president of Beyond Plastics and former EPA Region 2 Regional Administrator.

“This is an historic day for New Jersey,” said Jennifer Coffey, executive director of the Association of New Jersey Environmental Commissions (ANJEC). “This law marks a monumental step forward in the fight against the fossil fuel industry and their production of disposable plastics, and a win for wildlife, clean rivers, and our ocean. After years of local officials taking steady, incremental steps towards banning single-use plastic by passing 130 local ordinances, we are finally doing away with polluting plastic bags and polystyrene food containers for good. This law is a product of many stakeholders and legislators working together to ensure all voices are heard, and we thank Governor Murphy for signing this bill into law.”