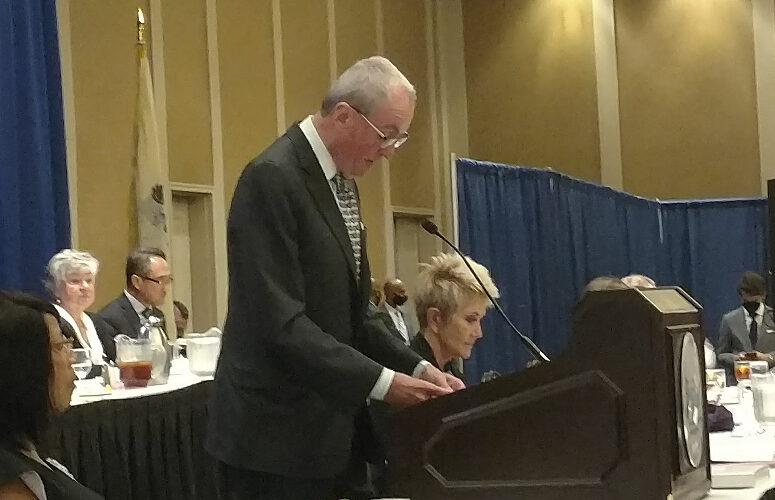 Perhaps wanting to distance himself from Jack Ciattarelli’s campaign commercials from the most recent election in which the Republican challenger questioned Gov. Phil Murphy’s stance on property taxes using the governor’s own quote –  “If property taxes are your only issue, we are probably not your state” – Murphy today talked about how his administration is providing “real property tax relief” to New Jersey residents.

Delivering the keynote address at the New Jersey State League of Municipalities league luncheon today, the governor said he is proud of his administration’s initiatives on reducing property taxes, but the efforts are still “a work in progress.”

However, he said that he would like to turn “small property tax increases into significant decreases.”

“Investments in public schools tie directly to affordability,” Murphy said. “Strong public schools are one of the greatest attractions for new residents and businesses. They are also critical in maintaining the investments families have made in their homes. These, in turn, stabilize municipal levies. Every dollar that we provide to our school districts is a dollar [municipalities] don’t have to ask for from taxpayers.”

The notion of investing heavily in public education in order to take the pressure off of taxpayers can also be applied to infrastructure improvements, the governor said.

“This is why we are a cheerleader for the federal infrastructure bill and why we support the passage of the entirety of the federal Build Back Better plan, which includes everything from expanding access to childcare, to restoring the SALT tax deduction. … We are going to get that SALT tax deduction lifted even if it kills me,” Murphy said.

Ensuring strong local economies is also important in “powering” the state’s future, Murphy said, adding this is where the state’s new business incentive programs come into play. “For the first time, we have incentives programs that put small businesses and communities first,” he said.

The governor mentioned recent business developments in the state that are bringing in or retaining jobs. This included: the HAX accelerator program that should create some 2,500 jobs in Newark; Pfizer’s new facility in Berkeley Heights, which will be home to some 3,000 jobs; Party City’s new headquarters in Woodcliff Lake, bringing in some 350 jobs; and the offshore wind energy industry’s investment in Paulsboro where twind turbine components will be manufactured.

Overall, Murphy said, “We are creating economic opportunities that simply did not exist before. It is more opportunities for good-paying jobs, in sectors ranging from manufacturing to tech to film and beyond for everyone; from young people fresh out of college, to working families, to older employees looking to build a stable retirement. … All can now benefit from these efforts.”