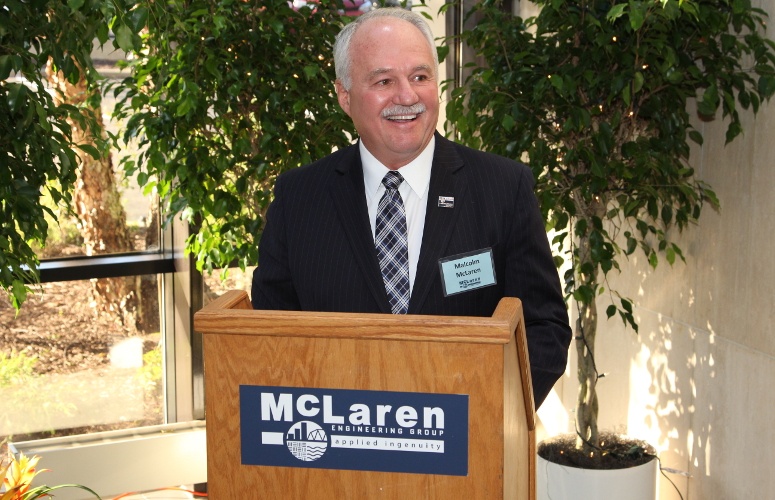 McLaren Engineering Group officially cut the ribbon on its new 57,000-square-foot corporate headquarters in Woodcliff Lake, Bergen County, where it currently employs 130 people and plans to hire more in the near future as the facility can accommodate up to 250 professionals.

According to company founder, President and CEO Malcolm McLaren, “The firm has been doubling in size every six years, so we needed this Class A office space in New Jersey.” The building, located at 530 Chestnut Ridge Road, is owned by Keystone Property Group.

McLaren Engineering made the move from West Nyack, Rockland County, New York, where it still maintains a dive operations facility.

McLaren is a New Jersey native who was born in New Brunswick, graduated from Delaware Valley Regional High School in Hunterdon County, and obtained his graduate degree at Rutgers University, where he today sits on the industry advisory board of the Rutgers School of Engineering.

The move to New Jersey was driven by the number of projects the company is working on in the Garden State. Most recent ventures include: the Wittpenn Bridge in Kearny; Cavern Point Marine Terminal in Jersey City; mixed-use developments at 197 and 207 Van Vorst in Jersey City; the Pulaski Skyway Bridge in Kearny; a recreational pier in Weehawken; automated signage at Newark Liberty International Airport; wharf reconstruction at Port Newark; and the Babbio Center at Stevens Institute of Technology in Hoboken. The firm has also worked to improve more than 300 miles of coastline in the Port of New York and New Jersey.

In the coming months, the company will be hiring several dozen professionals at Woodcliff Lake, including engineers for entry level, project management and senior leadership roles, as well as administrative professionals in accounting, information technology, human resources and marketing.

On hand at the ribbon cutting were public officials from local, county and federal level who all congratulated McLaren Engineering for choosing to locate to Bergen County and New Jersey.

Bergen County Freeholder Tracy Zur said there are many synergies between McLaren Engineering and Bergen County: “We value our highly educated workforce and we are constantly looking at innovation and pushing the envelope to make sure we are providing better services, like [McLaren is]. We are constantly giving back to the community and we know that is also what makes McLaren such as good business neighbor.”

Congressman Josh Gottheimer (N.J.-5), added, “McLaren Engineering Group’s expansion in North Jersey shows that we have the talent to attract jobs and businesses here. It is up to us to make sure we keep the environment hospitable for you.”

McLaren Engineering was a basement start-up company founded 40 years ago that today has 10 offices throughout the US (there is also a marine services operations in Liberty Landing Marina in Jersey City) and a total of 250 employees. Since its founding, the company has provided innovative, customized engineering solutions for more than 15,000 projects.

The company is now employee owned, and McLaren stressed, “These people are now our future. They have gotten us here, and the future is now in their hands.”