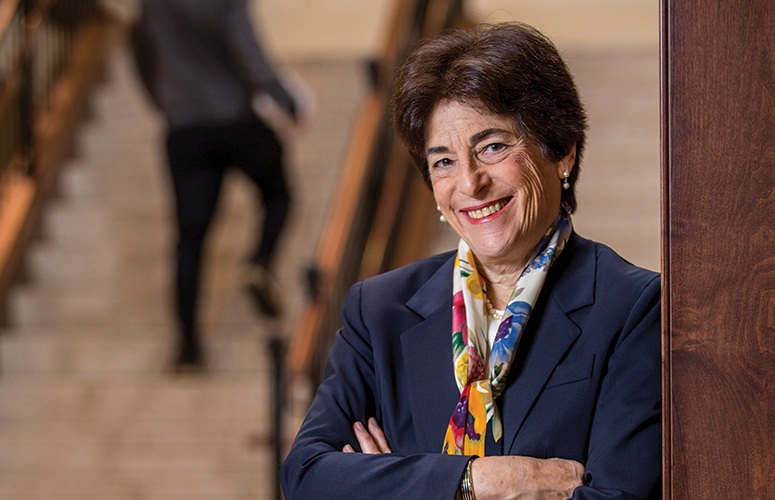 Susan A. Cole, Montclair State University’s president, announced that she has informed the board of trustees of her intention to retire at the end of this academic year, effective July 2021.

The announcement came in an address to faculty and staff live streamed on the University’s YouTube channel.

Cole announced that this academic year, her 23rd at the helm of New Jersey’s second largest university, will be her final one as president. She will remain in office until July 1 or whenever after that date the next president can take over.

Known as an energetic and engaged leader with an unflagging work ethic, Cole said she is leaving not because she accomplished everything she set out to do, but because “at some point, I just have to stop.” The work of developing the University, she said, is never done. “The University is organic and ever changing and meant for the ages, not just the decades. And, as for me, if I stayed here for another 20 or so years, I would still never accomplish what I came to do, because my dreams and goals for the University keep growing with the University.”

“The people of New Jersey owe a tremendous debt of gratitude to Dr. Susan Cole for her extraordinary contributions to our state,” said New Jersey Gov. Phil Murphy. “She believes deeply in the power of higher education to transform lives and open doors of opportunity. Dr. Cole has been a tireless advocate for the students she serves, and I have great respect and admiration for her and wish her nothing but the best as she embarks on this next chapter.”

“Susan Cole has led the University through a remarkable period of growth and transformation,” said Francis Cuss, MD, chair of the board of trustees. “The Board greatly admires her leadership abilities and deeply appreciates that she has agreed to remain as president to lead the University through this very challenging year, until a national search for her successor is completed and a new president appointed. Since President Cole is so deeply identified with the University’s many achievements, it is hard to envisage Montclair State University without her, however the Board is confident that thanks to her vision, her leadership and her tireless efforts over the past two decades, the University is well prepared for continuing academic progress and a bright future.”

Cole became Montclair State’s eighth, and first woman, president in 1998. During her tenure, the University’s enrollment grew from 12,000 to 21,000 students, and Montclair State took its place as one of New Jersey’s most successfully diverse institutions, while expanding its degree offerings and earning national and state recognition as a research university. Throughout it all, the University has kept its focus on its students, providing them with an excellent yet affordable education to equip them to lead lives of purpose and meaning.

Under Cole’s leadership the University created  four new schools and colleges: the School of Communication and Media, home to one of the nation’s best media production facilities and over 1,000 students; the John J. Cali School of Music, which together with the Department of Theatre and Dance has gained a national and international reputation for educating performing artists; University College, which serves close to 2,000 pre-major students; and a new, highly innovative School of Nursing.

During that time, Montclair State also:

To support its growth and lay the groundwork for its future development, Montclair State completely rebuilt its energy infrastructure and became one of only a few universities in the nation, and the first in New Jersey, to achieve energy independence with its own microgrid.

As the physical size of the University grew and new programs were added, its existing academic programs also flourished. The College of Humanities and Social Sciences retained its strong commitment to providing a high-quality liberal arts core for all students and developed an array of new programs that focused on issues related to the child in society and social justice.

Montclair State has enjoyed a longstanding reputation as a leader in the preparation of teachers and educational leaders, and the College of Education and Human Services today continues to be recognized among the strongest colleges of education in the nation.

Other University achievements during Dr. Cole’s tenure include:

“The years have been filled with really hard work,” said Cole, “and I could never say enough about the quality of the effort and commitment of the whole Montclair State team. The University has been able to attract extraordinarily talented faculty, staff and senior administrators. I give them the credit for creating a great university to serve the people of this state and beyond. I also give enormous credit to the University’s Board of Trustees, who believed in the vision and were unfailing in their support over the years, as have been the Foundation Trustees, and the many individuals who have served on advisory boards and in so many other ways continue to support the work of the University.”