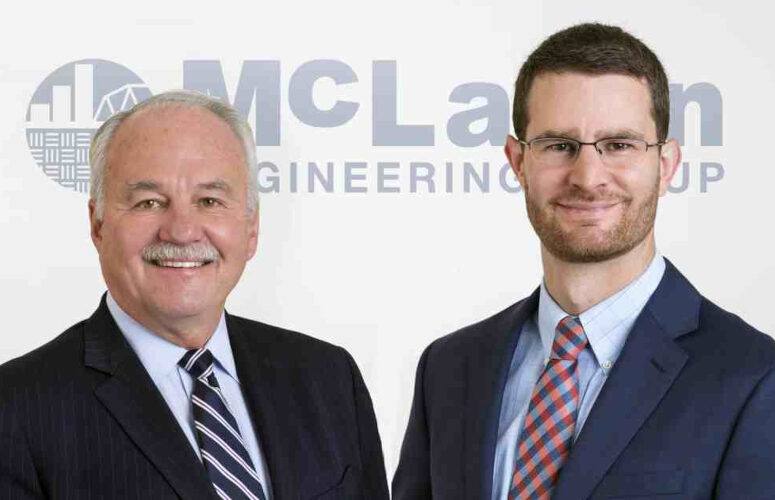 McLaren Engineering Group’s Founder and Chairman, Malcolm McLaren, PE, announced the next phase of the Woodcliff Lake-based firm’s succession plan with the appointment of Jeremy Billig, PE, current president, to the role of CEO. Billig takes the helm of the leading multi-disciplinary engineering firm’s operational structure as former CEO, McLaren shifts into a new strategic position as executive chairman of the board.

The anticipated transition of both roles signifies a rollout of McLaren Engineering Group’s strengthened future vision as the company continues its trajectory into a built environment staple.

“Building upon the entrepreneurial roots Mal planted, I aim to bolster McLaren’s reputation of out-of-the-box thinking and technical excellence with a tactical emphasis on process and technological advances,” Billig says. “As we earn more accolades as a top engineering firm, our hallmarks of responsiveness and applied ingenuity will continue to lay the foundation for our next phase of growth and expansion.”

Prior to his appointment as president in 2019, Billig’s 17-year tenure at McLaren included directing a wide range of complex engineering projects while starting and growing the company’s NYC office. As the firm expanded, Billig worked with Malcolm McLaren to develop a scalable structure to accommodate the company’s rapid growth.

“Throughout my career, Mal has been an exemplary leader, mentor, and engineer. Since founding the firm in his basement in 1977, he has propelled us to the forefront of the AEC industry. As CEO, I will be expanding on this foundation and ushering in a new chapter with a defined direction,” Billig continues.

In McLaren’s new role as executive chairman of the board, he will provide strategic oversight to lead the firm’s board of directors, while directing the absorption of innovative technology and overseeing complex projects.

“I started McLaren Engineering Group when I was 25 years old with a slide rule in one hand and a SCUBA tank in the other,” McLaren says. “Four and a half decades later, I’m proud to say the firm has developed beyond my expectations by responding to our clients’ needs and pushing the envelope technically. Over the past few years, we have focused on building an organization that is nimble, flexible and primed for growth. It is an honor to hand the reins to Jeremy, who is a brilliant, meticulous and process-driven trailblazer. Under his direction and foresight, I know the next generation of leadership will amplify our core values while bringing the team to new heights.”

Since its inception, the employee-owned firm has built a strong industry standing with a portfolio of over 20,000 innovative projects spanning infrastructure, transportation, entertainment, energy, healthcare, industrial and real estate development. The engineering empire has been expanding with offices coast to coast and a well-diversified line of services that includes structural, civil, marine, entertainment, bridges, forensics, facades, geotechnics, construction engineering, and surveying.