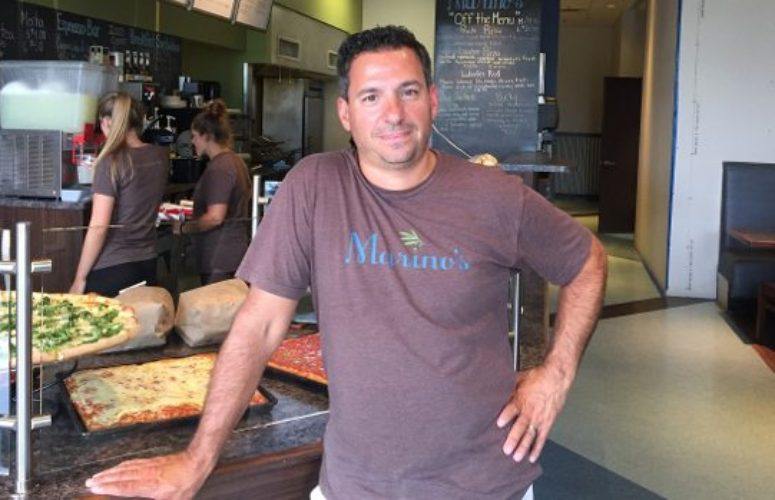 Marino’s of Mullica Hill, the upscale fast casual farm-to-pizza concept created by second generation New Jersey Chef Anthony Marino, is growing! The award-winning restaurant is closing after business on Saturday, August 20th for nearly a month to undergo major construction as it doubles its current space for diners and restaurant operations. Marino’s will re-open Tuesday, September 20th at noon with a ceremonial “pizza-cutting” of a giant six-foot-long pizza hosted by Chef Marino and Harrison Township dignitaries. Marino will also be offering $1 slices and $5 medium plain pizzas all day long as a token of his appreciation for his customers’ support.

The expansion comes as Anthony Marino celebrates his five-year anniversary in the space at the Mullica Hill Commons Shopping Center. “I was blown away by how well received our salads, sandwiches and pizzas have been since we first opened. We source our ingredients from South Jersey farms whenever possible. We’re supporters of local growers, and in turn, our customers have been incredibly supportive of us.”

Marino’s will knock down the walls and take over the vacant space next door. This will double the square footage to 4,000 and increase the current seating capacity from 40 to 90 inside and from 12 to 24 outside.

The larger space will also mean a reconfigured kitchen with upgraded equipment and increased prep and refrigeration space. The re-engineered kitchen will allow staff to keep up with additional orders and provide faster assembly of Marino’s incredibly popular hoagies, cheesesteaks and signature sandwiches. A new addition will be a grab-and-go case stocked with salads and sandwiches, including the popular Flank Steak Panini, The Becky (a chicken cutlet sandwich named after Marino’s wife with all of her favorite ingredients) and The Bucky (a grilled chicken sandwich with bacon, avocado, sharp cheddar, Dijon ranch dressing on toasted sourdough).

While the physical space is becoming larger, Chef Marino says the menu will remain largely unchanged, with everything made from scratch and daily chalkboard specials that rely heavily on seasonal ingredients that his customers have come to love. In addition to his hoagies, cheesesteaks, signature sandwiches and thin-crust pizzas utilizing a 44-year-old family sauce recipe, Marino’s menu also features hand-made strombolis, calzones, soups, made-to-order salads and authentic panini that have garnered accolades from South Jersey magazine. This year, the publication named the restaurant the “Best of the Best” in the salads category, and the Grilled Chicken and Goat Cheese pizza was also named one of the “30 Greatest Pizzas” you can order in South Jersey. In 2013, Marino’s Muffuletta was among the “50 Best Sandwiches” chosen by SJ food writers.