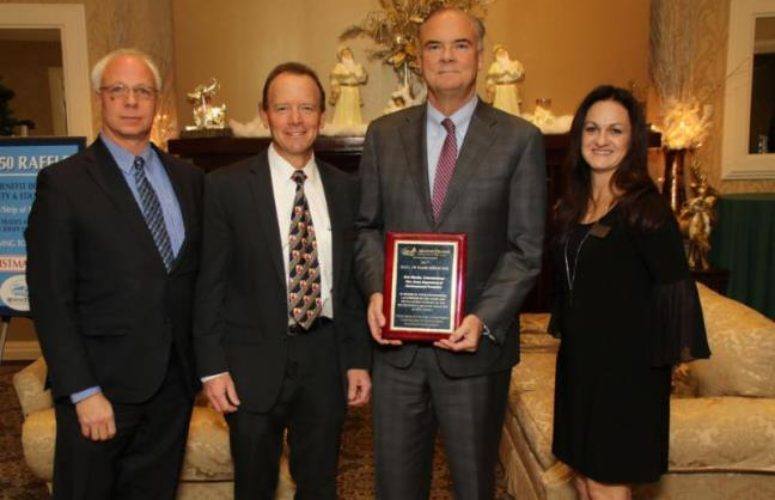 The Marine Trades Association of New Jersey (MTA/NJ) is pleased to announce the induction of Commissioner Bob Martin of the New Jersey Department of Environmental Protection (DEP) into their Hall of Fame. The award was presented at the MTA/NJ’s Annual Christmas party on December 14th at Jumping Brook Country Club, Neptune. Commissioner Martin was presented the award in honor of his exceptional leadership of the DEP and continued support of the recreational boating industry in New Jersey.

The MTA/NJ Hall of Fame was established to honor an individual, group or organization who, over the years, has proven to be outstanding in furthering MTA/NJ’s objectives of promoting and protecting the marine industry. The award is presented by the MTA/NJ in recognition of extraordinary achievements, dedication and perpetuating the highest ideas, trust and professionalism for the recreational boating industry.

“I am humbled and honored to be inducted into the Hall of Fame for the Marine Trades Association of New Jersey,” said Commissioner Martin.   “Marine trades are an indispensable part of New Jersey’s economy, its livelihood and its culture.  The Association has worked closely with the DEP over the past several years to help shape public policy for the boating community.  I am proud of the work we have accomplished at the DEP, with their support, to address critical issues such as public access and Super Storm Sandy recovery.

“Commissioner Bob Martin has been leading the DEP for nearly 8 years. Right from the very beginning he began to transform the Department into a more efficient and customer service oriented agency that worked hard to support the boating industry,” stated MTA/NJ Executive Director Melissa Danko.

“Commissioner Martin and his team tackled many important issues that impacted our industry including public access at marinas, the devastation of Hurricane Sandy, regulatory reform and permitting relief, the health of Barnegat Bay and most recently Summer Flounder. Having someone like Commissioner Martin willing to address our concerns, understand the importance of our industry and proactively work to make a difference is the leader that we need to ensure a healthy, prosperous and growing boating industry in New Jersey.”

A Measured Approach to Clean Energy