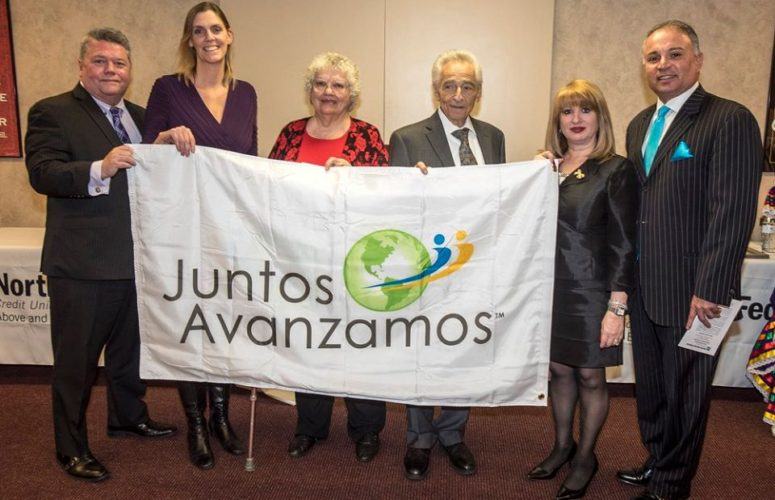 Totowa-based North Jersey Federal Credit Union has made history as the first credit union to become an official Juntos Avanzamos credit union as recognized by the National Federation of Community Development Credit Unions.

Today, officials gathered at North Jersey Federal Headquarters, to commemorate the designation with guests, staff, senior management and Board of Directors.  In attendance were US Senator Bob Menendez; Cathie Mahon, President/CEO, National Federation of Community Development Credit Union (NFCDCU); Jacobeth Hernandez Mendoza, Representative of Consul General of Mexico; as well as Mayor John Coiro of Totowa, and Mayor Hector Lora of the City of Passaic.

“It is critical for us to help build portals to legitimate financial services. Accepting other legal forms of identification has become incredibly important to the unbanked population.  Everyone benefits when immigrants save, borrow money and participate in the economy,” states US Senator Bob Menendez.

The Juntos Avanzamos (Together We Advance) has been awarded to only 62 credit unions primarily in the west/southwest areas of the United States, until now.  North Jersey Federal Credit Union is now officially the first credit union in New Jersey to earn this prestigious designation.  Significantly, NJFCU is officially recognized, by the National Federation of CDCU as possessing the institutional capacity and commitment to serve Latinos and immigrants by offering flexible account opening and loan underwriting criteria making it easier for consumers to gain access to responsible financial services and asset building lending products.

“In Totowa we have seen an increase in immigrant Latino populations over the years.  This is a really good thing for North Jersey Federal to provide these much-needed services in meeting the needs of our community,” states Mayor Coiro as he and Cathie Mahon discussed what impacts it will have on the local community.

Cathie continues, “We have a very rigorous process for credit unions to apply and receive this designation. To become a Juntos Avanzamos credit union means you will have passed benchmarks in several key areas such as the products and services offered, the number of bilingual signage and marketing that has been used in the past, whether a process was put in place to hire bi-lingual staff and management, and so on.  Essentially we review how well the credit union has incorporated providing products and services to a Spanish-speaking immigrant community.”

Most notably, the designation supports North Jersey Federal’s efforts to expand its culturally-sensitive products and services to Hispanic immigrants including its use of the flexible Customer Identification Program that allows North Jersey Federal to provide loans to individuals who have Individual Tax Identification Number (ITIN) Cards or Matricula Consular Cards (given to Mexican immigrants by the Mexican Consulate).  The Juntos Avanzamos designation will also recognize North Jersey Federal’s hard work towards ensuring diversity in the workplace and its efforts to be inclusive in their product offerings and services. They employ bilingual staff at all branches, have consistently created marketing materials and documents in English and Spanish, launched one of the first Spanish/English credit union websites in the state of NJ and has been at the forefront of providing significantly greater insight into serving the Hispanic population.

“In the tri-state area alone, we have estimated up to 1.2 million immigrant Mexicans. We are looking forward to working with NJFCU in providing services to this community,” states Jacobeth Hernandez Mendoza.

Unfortunately, nearly 1 out of every 2 Hispanic households are unbanked or underbanked, and nearly 70 percent of unbanked Hispanic households have never opened an account.  They are typically frequent users of alternative financial service providers such as check-cashers, money transfer services and “buy-here, pay-here” loans.  These alternatives make them extremely vulnerable to predatory financial practices.

“We pride ourselves in being the first in making good business decisions that serve diverse communities.  We were the first credit union to have a Spanish language website in NJ, we have Spanish-speaking staff in all branches and we were the first to have a Latina CEO in NJ, states Lourdes Cortez.  NJFCU plans on implementing a full-scale marketing and outreach plan program to reach those many immigrants who do not have a social security card. Uniquely, NJFCU accepts a variety of identifications such as the Individual Tax Identification Number card which allows immigrants to apply and receive loans, open accounts and more.