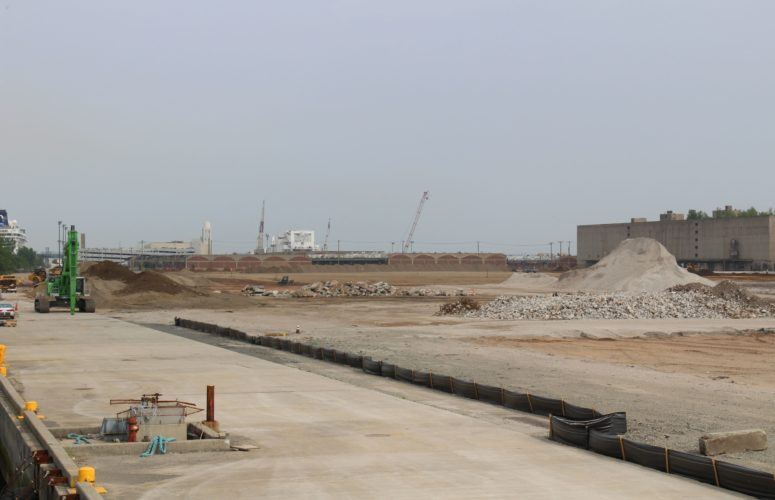 Lincoln Equities Group (LEG) announces site-preparation milestones for its 152.9-acre, 1.4-million-square-foot waterfront site, Lincoln Logistics Bayonne, before 100-plus brokers aboard the Cornucopia Destiny on June 5. The redevelopment is expected to create 2,700 jobs. The address took place dockside on the Bayonne peninsula that will house the facility.

On a maritime tour of the site yesterday, LEG President Joel Bergstein announced that vertical construction at the future logistics hub – the site of the former Military Ocean Terminal at Bayonne (MOTBY) – is set to begin in 2020. The massive site has received hundreds of thousands of tons of fill-dirt hauled via barge and truck.

The logistics center has site plan approval for up to four buildings between 150,000 and 477,000 square feet, or a single 1.1-million-square-foot site – coupled with 40-foot ceilings, trucking lanes and employee parking.

“This development is a perfect example of the City of Bayonne, the Port Authority of New York and New Jersey and private business pulling together to get the project done,” Bergstein said aboard the Cornucopia. “We’re just 7 miles from Newark and 8 miles from the Holland Tunnel. We’re essentially the ‘sixth borough,’ and this will be a prime distribution point for the city.”

In a brief address to attendees, Davis thanked LEG, the Port Authority, Bayonne City Council and Global Container Terminals for their partnership on the project. The mayor also praised the work being done to bring thousands of jobs to the city.

The site contains 62.9 acres of riparian water rights, offers immediate maritime access to the Hudson River and the Newark Bay (via the Kill Van Kull), as well as direct access to the New Jersey Turnpike, Interstate 78, Route 440, Routes 1 & 9 and the GCT (just 800 feet across the channel).

GCT President John Atkins, in attendance for the June 5 briefing, stated that with usage of the marine terminal road, products can be moved from the port facility to the new warehouse location without concern of weight restrictions. Goods can be swiftly transferred to the warehouse to be broken down, he noted.

The site features a 1,700-foot wharf and its central location provides ample workforce and readily available housing options. Parcels for the logistics center are currently available for sale or lease.

LEG acquired the property in June 2018 and oversaw demolition of 70-year-old industrial structures and concrete foundations. To comply with post-Hurricane Sandy standards, the elevation of the site is being raised 6 feet.

Representatives from Cushman & Wakefield, the brokerage team tasked with recruiting warehousing and logistics companies, were also in attendance.

The facility will sit on a man-made peninsula once used by the U.S. Navy as a repair base during World War II. It was obtained by the U.S. Army in 1967 but shuttered in 1999 amid a wave of deindustrialization.