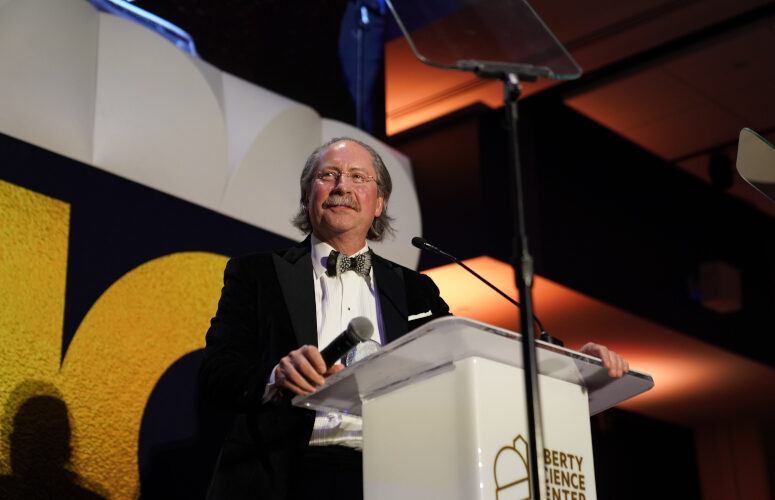 Genius Award recipient Robert Montgomery, MD, DPhil, chairman and professor of surgery at NYU Langone Health and director of the NYU Langone Transplant Institute. He is a practicing transplant surgeon who himself is the recipient of a heart transplant.
Science & Technology

This past Monday, Jersey City-based Liberty Science Center (LSC) honored three people for overcoming enormous challenges and rising to the pinnacle of their respective professions in science, technology, and medicine. Hugh Herr, a double-amputee considered the “Leader of the Bionic Age,” Priyamvada Natarajan, a professor of astronomy and physics at Yale University and one of the foremost cosmic cartographers in the world, and Dr. Robert Montgomery, a pioneering transplant surgeon who, himself, is the recipient of a heart transplant, were the recipients of the “Genius Award,” the highest honor given by LSC.

Changing lives—and minds—is the raison d’etre of the three Genius awardees, explained Paul Hoffman, LSC president and CEO. “They are making the impossible possible; they are making dreams reality; they are shrinking the universe for us to understand and appreciate while also expanding the worlds of individuals, communities, and nations through their inspiring achievements,” Hoffman said.

The Genius Gala raised approximately $3 million. This year marked the 10th anniversary of the event which has raised over $22 million for LSC’s STEM education programs, helping to make world-class science learning accessible to students, teachers, and families, including those in high-needs communities.

At the gala, LSC also paid tribute to Abhimanyu Mishra as a “Special Honoree.” Mishra made history on June 30, 2021, when he became the youngest chess Grandmaster ever at the age of 12 years, four months, and 25 days. A native of Englishtown, NJ, Mishra learned the rules of chess before he turned three and began playing in tournaments at five years old. In 2015, six-year-old Mishra faced the No. 2 player in the world, Fabiano Caruana, the visiting Grandmaster-In-Residence at Liberty Science Center, which “changed his life,” his father said.

During the gala program, Mishra played Speed Chess against another special honoree, Jessica Hyatt, a 16-year-old from Brooklyn who is aiming to become the first female African-American chess master in history. With an official chess rating of 2095, Hyatt, who attends Success Academy High School of the Liberal Arts in Manhattan, is just 105 points shy of reaching her goal. Hyatt beat Mishra to become the new LSC Speed Chess Champion.

LSC presented its second Strides in STEM Award to YouTube science and technology superstar Marques Brownlee. A former teen volunteer at the Center, he is known professionally as MKBHD. As of April 2022, he has over 15 million subscribers and nearly 3 billion total video views on YouTube. Beyond that, he hosts the popular podcast Waveform. He has been called “the best technology reviewer on the planet right now” by Vic Gundotra, a former Senior Vice President of Google.