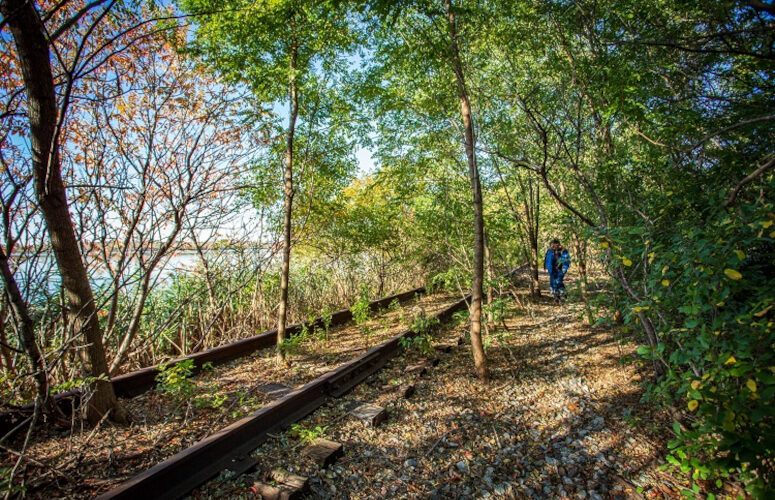 On the right track: A small segment of the planned Essex-Hudson Greenway state park.
General Business

Gov. Phil Murphy today announced the state’s intention to purchase nearly nine miles of property stretching from Jersey City to Montclair, for the creation of New Jersey’s first new state park since 2006. The announcement follows years of advocacy for the acquisition and transformation of the now abandoned former Boonton rail alignment as a multi-modal transit and recreational trail corridor that crosses above both the Passaic and Hackensack Rivers for the creation of the Essex-Hudson Greenway.

Connecting the communities of Montclair, Glen Ridge, Bloomfield, Belleville, Newark, Kearny, Secaucus, and Jersey City, the park will also provide a new pedestrian route and protect the environment by providing residents with a new and convenient method to reach their destinations without the use of a car.

“This project has been years in the making, and I am proud to be the governor to advance this dream to being a reality,” Governor Murphy said. “This new park will be a crown jewel of our state park system, providing much-needed recreational space to New Jerseyans and out-of-state visitors, while revitalizing and protecting environmentally-sensitive areas. Residents of our state’s two largest cities, and the suburbs beyond and in-between will benefit from access to a multi-use trail, and the natural beauty of the Meadowlands.”

The new park will pass through a diverse landscape of existing parks and wetlands, as well as urban, suburban, and industrial areas. It will include walking paths, bike lanes, and other recreational uses, allowing visitors to take full advantage of a trail that exhibits the varied landscapes of our state including the scenery of the Meadowlands.

Funding for the park will be provided through a collaborative effort by the Murphy Administration, including the support of the Department of Environmental Protection and NJ TRANSIT, the Legislature, and New Jersey’s congressional delegation, utilizing American Rescue Plan (ARP) funding. Over the past few years, NJ TRANSIT and the Open Space Institute have been engaged in negotiations with the Norfolk Southern Corporation for the purchase of this land, which will now be possible with the State’s support. The State’s acquisition of the land also allows its potential future use for mass transit purposes, alongside recreational uses.

The Essex-Hudson Greenway Coalition – comprised of the Open Space Institute, the New Jersey Bike & Walk Coalition, and September 11th National Memorial Trail Alliance – has been advocating for the project.

“Today’s announcement by the State of New Jersey completes the first major step in making this Greenway a reality. We commend Governor Murphy, all the local leaders and elected officials who recognized the extraordinary potential of the Greenway, and our coalition partners – New Jersey Bike & Walk Coalition and the September 11th National Memorial Trail Alliance – who have been key partners in growing support for the Greenway,” said Kim Elliman, president and CEO of the Open Space Institute, which secured the rights to purchase the former Boonton Line from Norfolk Southern Railway for $65 million nearly two years ago. “We are proud of the role we played to negotiate the deal, bring stakeholders together, and generate public and private support for the initiative.”

In July 2020, the Open Space Institute (OSI) reached a preliminary purchase and sale agreement with Norfolk Southern Railway for the property in Essex and Hudson counties for the purpose of the Greenway. Local community leaders have been calling for the creation of a linear park on the former rail line property to create a safe, off-road trail to ride a bike and walk; ease traffic and offer active transportation options; create alternate commuting options; provide close-to-home, easy access to the outdoors; and bring much needed greenspace to urban communities that are traditionally and negatively impacted by infrastructure development.

Changes at the Top at B&G Foods