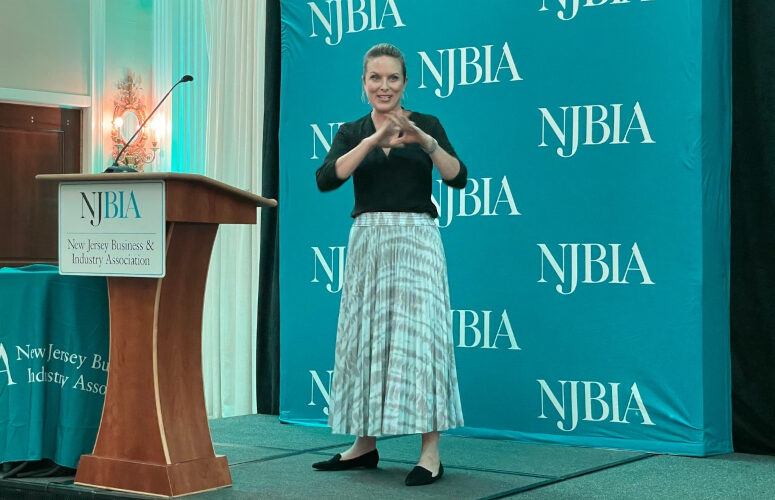 Kerry Barrett succeeded in the cut-throat, male-dominated broadcast television news industry by ignoring the chauvinism, derogatory comments and actions, and workplace politics surrounding her for 20 years by focusing on the task at hand … her job.

As the keynote speaker at last night’s opening reception of the New Jersey Business & Industry Association’s 7th Annual Women Business Leaders Forum (WBLF), the Emmy-award-winning news anchor, whose career spanned jobs at ABC, NBC and Fox News, told a room of more than 225 female attendees that they are all warriors and that the best thing they can do in facing their career challenges is to be the best they could be and not get distracted.

“It is harder for women [in the workplace], and that’s the reality,” Barrett said. “So, what do we do? … We must go into work each day and know what our goals are and what the endgame is.”

In discussing her career, Barrett told stories of disparities among female and male news anchors. For example, women anchors had a “shelf life” and many, as they reached their mid-40s, underwent cosmetic surgery to make themselves look younger. Meanwhile, their male counterparts didn’t have to deal with that issue.

Barrett also told the true story of an experiment in which a male anchor wore the same suit on the air for an entire year. … No one called him out on it. “If I wore the same dress twice in a four-month period, someone would point it out,” Barrett said.

She said sexual harassment was also rampant years ago, but things are changing for the better. Barrett told the women in the audience that they have the power to speak up for the millions of other women who do not have a voice. “We do not only have the privilege, but we have the responsibility, as warriors, to speak up for women who lack financial means, education or networking opportunities,” she said.

Michele Siekerka, NJBIA President and CEO, discussed how the COVID-19 pandemic has disparately impacted women in the workplace. “One-in-four women left the workplace at the height of the pandemic. Nationally, 1.8 million women dropped out of the workforce entirely, while the female labor participation rate, at 60%, is the lowest it’s been in three decades,” Siekerka said. “This accounts for as much as a 30% gender wealth gap across the nation. Also, if we had the same number of women as men participating in the workforce, the nation’s GDP would be 5% higher.”

Siekerka said that for women to get ahead, including female middle managers, senior leaders, and executives, it’s all about accessing opportunities such as the WBLF. “These next three days are all about advancing ourselves, our leadership skills and our profiles. Our goal is to lift women up to the C-Suite and board room.”

Natasha Hemmings, CEO of Girl Scouts Heart of New Jersey, gave the champagne toast at last night’s event, saying, “We raise our glasses in celebration of sisterhood, of connectedness, of resiliency, of lifting each other up, of growing, and of reinvesting in our professional paths!”